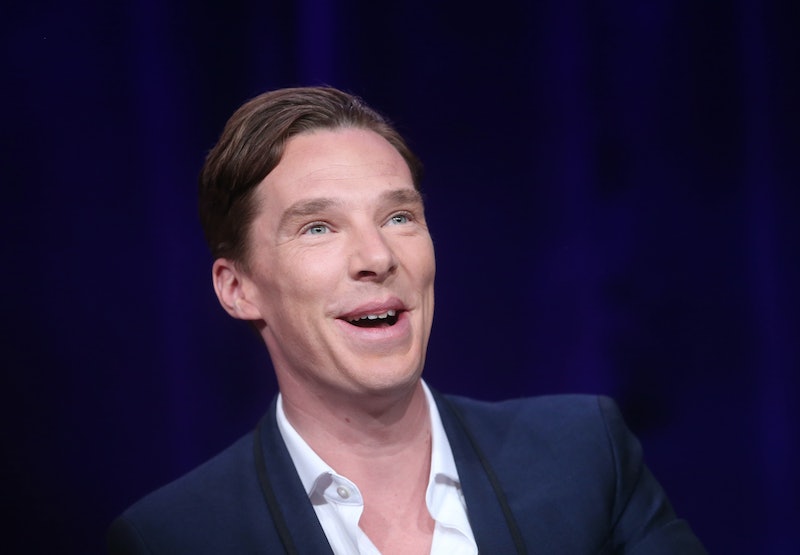 The reign of Benedict Cumberbatch continues with his Golden Globe nomination for Best Actor in a Motion Picture - Drama for his portrayal of Alan Turing in The Imitation Game. If you weren't already swooning over the extremely tall British drink of water (or tea, I guess), you probably fell under his spell this year, either by way of his amazing impressions or his even more amazing photobombs (did you know you can buy Cumberbatch photobomb bookmarks!?). So, with this new honor for the actor, you may be wondering how many Golden Globes Benedict Cumberbatch has won already? Sorry, Cumberlovers, the answer is zero.

Obviously, Cumberbatch can win his first Golden Globe this year, but his show, Sherlock, was snubbed and he didn't receive a nomination for Best Actor in a TV Drama — per new Golden Globe rules, it's no longer considered a mini-series. Still, Cumberbatch could snag the award for The Imitation Game. And if he doesn't win, THERE'LL BE HELL TO PAY.

Just kidding. Kind of. But it is surprising that Cumberbatch has only been nominated in the past for one Golden Globe, EVER — for his performance as the titular character in Sherlock in 2012. No nomination in 2013 because of... who knows? It's perplexing.

But even though he hasn't been recognized for his great modern revision of the cold, brilliant detective Sherlock Holmes, there's a good chance he could take the award for The Imitation Game this year. His performance was described by David Edelstein in his wonderfully weird review of the film as "played with captivating strangeness by Benedict Cumberbatch, who has the perfect visage for a man who seems to have been part alien."

Don't hold a grudge against the Hollywood Foreign Press Association, though. Long before he was Sherlock, Cumberbatch was spreading his talent 'round a bunch of different mediums — stage, film, television. And, especially in the U.K., he's been honored for his great work. Earlier this year at the 2014 Emmy Awards, Cumberbatch took home the statue for Best Actor in a Mini-Series for his work in the Sherlock episode "His Last Vow" (which, if you haven't seen it, is the tops). Naturally, his army of fans were understandably thrilled.

But Cumberbatch's career spans much more than Sherlock. He was nominated for both a Evening Standard Theatre Award in 2011 and a Critics' Circle Theatre Award (which he won) in 2012 for his role as Frankenstein's Monster in the stage adaptation of the play. He also gave a performance in Hedda Gabler in 2005 which The Telegraph called electrifying, for which he was nominated in 2005 for both a Laurence Olivier Award and an Ian Charleson Award, which he won.

Other notable accolades from the recent past include a win at the Television Critics Association Award in 2012 for his role in Sherlock. The British National Television Awards honored Cumberbatch as Best TV Detective in 2014. (Tangent: what an ADORABLE category. Those Brits really do love their sleuths.)

Of course, it remains to be seen if Cumberbatch will take home the prize for The Imitation Game, but his performance truly merits a win. He's up against some formidable nominees, namely Steve Carell for his surprising and terrifying role in Foxcatcher and Eddie Redmayne as Stephen Hawking in The Theory of Everything. But there's hope that this will be Cumberbatch's year. He's been in the game a long time, with so many great performances, that I hope the Golden Globes wises up and awards him already. And if not, he can comfort himself by going home and reorganizing all his other awards.

More like this
Elizabeth Olsen’s ‘SNL’ Cameo Made Benedict Cumberbatch A Multiverse Believer
By Grace Wehniainen
Remember When Benedict Cumberbatch Announced His Engagement In A Newspaper Ad?
By Hugh McIntyre
'Doctor Who’s New Star Is Already Huge On TikTok
By Maxine Harrison
How Ncuti Gatwa's 'Doctor Who' Casting Impacts His 'Sex Education' Future
By Nola Ojomu
Get Even More From Bustle — Sign Up For The Newsletter