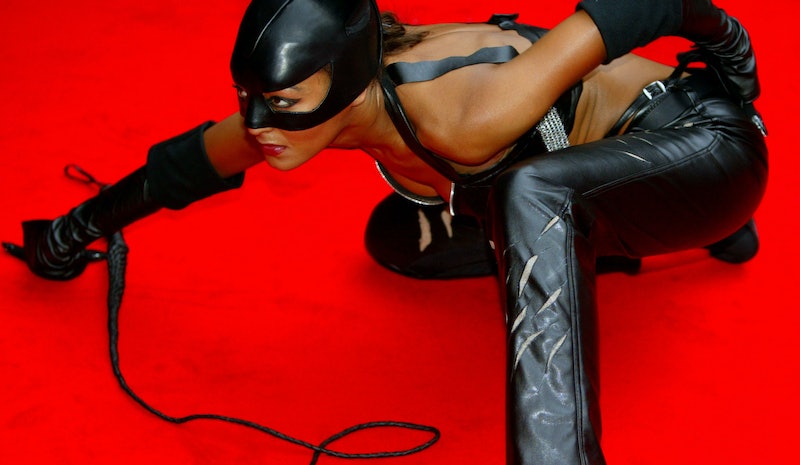 The Black Panther. Doctor Strange. Ant-Man. The Guardians of the Galaxy. The Inhumans.

Until recently, the only people who even knew what these names mean already read comics. But according to Stan Lee in an interview with Too Fab, they'll all be getting their own movies soon. You know who won't be getting a movie anytime soon? Female superheroes.

Well probably, at one time, they'll make a movie of the Black Widow. But you see, the thing is the women like these movies as much as the guys, so we don’t have to knock ourselves out to find a female...but we will.

It's hard to be mad at Stan Lee, who seems like the world's most awesome grandpa. But comments like these aren't just hurtful to women in entertainment, they've also been proven wrong. Yes, women will go watch The Avengers or any other movie with a male protagonist in nearly equal amounts with male audiences. But more and more, the opposite is becoming true. The kind of successes that movies like The Heat , Hunger Games, Bridesmaids and Girl with the Dragon Tattoo have had is not the kind of success that's limited to a male audience. It's the kind of success that crosses imagined gender boundaries.

Because that's all this is: imagined. The myth that stories with a male protagonist are for a general audience and stories with a female protagonist are for women has been told in our culture for so long that industries like the movie business base their practices on it. Newsflash: Pink isn't a "girl color." It's a hue of red, nothing more. And stories about women aren't "women's stories." Relating to a woman is much less strange than relating to a billionaire in a high-tech, super-powered suit, and it's incredible that people in the world of comics, a world that operates entirely on the suspension of disbelief, thinks that male audiences relating to women is just too unbelievable.

It's happened even before the explosion of women in entertainment of the past few years. The roles that women have had in action movies have been small, but there have been enormously successful blockbuster action movies with female leads. Men helped make Resident Evil a million dollar franchise. Men were in the theatres for every Kill Bill movie. Alien did not become a sci-fi classic on the strength of female audiences alone.

And while the world of comics has its own problems when it comes to female characters, there are so many rich stories for superheroines that exist in the comic world. Obviously, Wonder Woman comes to mind, because when are we ever going to get a movie for the America's most famous superheroine? But Batgirl also has a lot of recognizability and a wealth of plotlines to choose from, from getting paralyzed and turning into a super-hacker to trying to marry her longtime girlfriend today. And there are multiple versions of Captain Marvel! You can pick any one of them! Not to mention that Joss Whedon is a big Kitty Pryde fan, and Ellen Page already played the role in her X-Men debut. And they're both open to doing a movie...

There are endless possibilities for female superheroes. There are hundreds of characters out there in the Marvel and DC universes, waiting to make their big-screen debut and become some little girl's new hero. So Hollywood, forget your male-female audience ratio hang ups, because we all know they're bullshit. The audience is there, and we're waiting. Go for it.