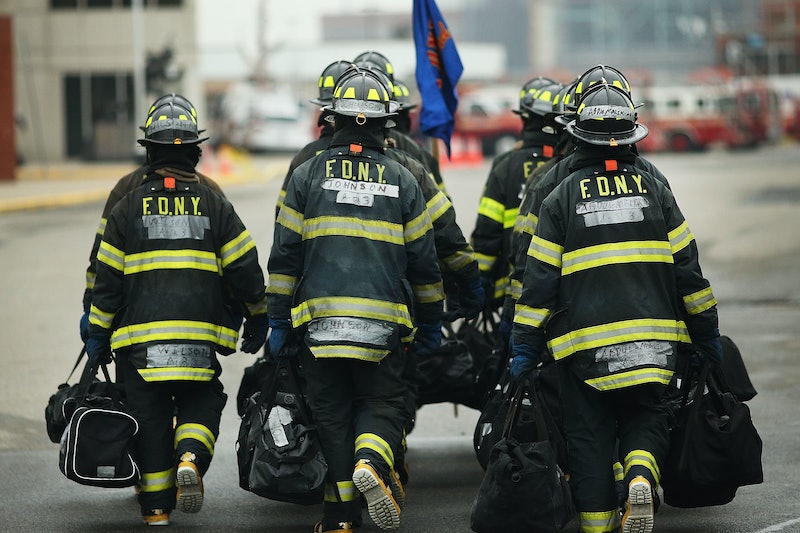 The New York City Fire Department has just 44 women among its ranks — 44 out of more than 10,000 firefighters, that is. That dramatic inequality likely stems from the department's rigorous physical skill test, which all prospective firefighter applicants must pass. After some heated debated, the FDNY has decided to drop its physical test requirement, believing that more women will now be encouraged to apply to the department. The debate, however, is far from over.

Fire Commissioner Daniel Nigro announced the new change at a New York City Council hearing on Wednesday. Although women and men will still have to take a physical test, Nigro said it will hold much less weight than before. Now, prospective firefighters who fail to pass the test will still be able to graduate and become full-fledged members of the force.

"We still grade the people," Nigro told the city council. "You can still fail it if you go beyond the time, but you’re not automatically failed from the program."

The fire commissioner admitted to the city council that the FDNY has a troubling track record of female recruitment, and it's an area that needs the most improvement:

So far, we have not done a good job in recruiting women who have the physical ability and the desire to be firefighters. Certainly, there are thousands of women capable of being firefighters in this city.

According to the FDNY, the Candidate Ability Physical Test, or CAPT, features eight components, including a stair climb, hose drag, and ladder raise. The test takes place over 10 minutes and 20 seconds "in a sequence that best simulates their use in a fire scene," the FDNY website states.

At all times during the test, the prospective firefighters must wear a 50-pound vest "to simulate the weight of self-contained breathing apparatus" (aka oxygen tank), as well as full firefighter gear. An additional 25 pounds is added to replicate the weight of a "hose bundle" during the stair climb portion of the test.

Although the FDNY wouldn't specify how many women fail to pass the strenuous test, the department told The New York Daily News that women firefighter students have a much higher failure rate than their male peers. All in all, 85 percent of the last four fire academy classes have graduated.

But out of 300 students in the next class, only 10 are women. Councilwoman Elizabeth Crowley (D-Queens), who's head of the fire committee, called these dismal numbers "simply unacceptable."

She added at Wednesday's hearing:

It is time we break down any barriers that still exist for women to become New York City firefighters.... There are still concerns that excessive testing methods within the Fire Academy are being used to keep women probationary firefighters from graduating.

While some argue in favor of the lax physical guidelines, others say getting rid of the physical requirement is an ill-advised move that could harm public safety. An unnamed former FDNY official told The New York Post in an interview:

It's a lowering of standards across the board. What needs to matter is how well you perform the tasks of firefighting. The question is when you’re 270 pounds and you’re on the fourth floor and someone comes through that window — can they pick you up and drag you out or not?

More like this
Chelsea Woody On Shattering Stereotypes In Surfing
By Leah Groth
The Music Industry Continues To Fail Black Women
By Precious Adesina
Michigan’s Governor Is “Going To Fight Like Hell” To Protect Abortion Access
By Andrea Zelinski
How To Fight For Reproductive Rights, Based On How Much Time You Have
By Courtney Young
Get Even More From Bustle — Sign Up For The Newsletter