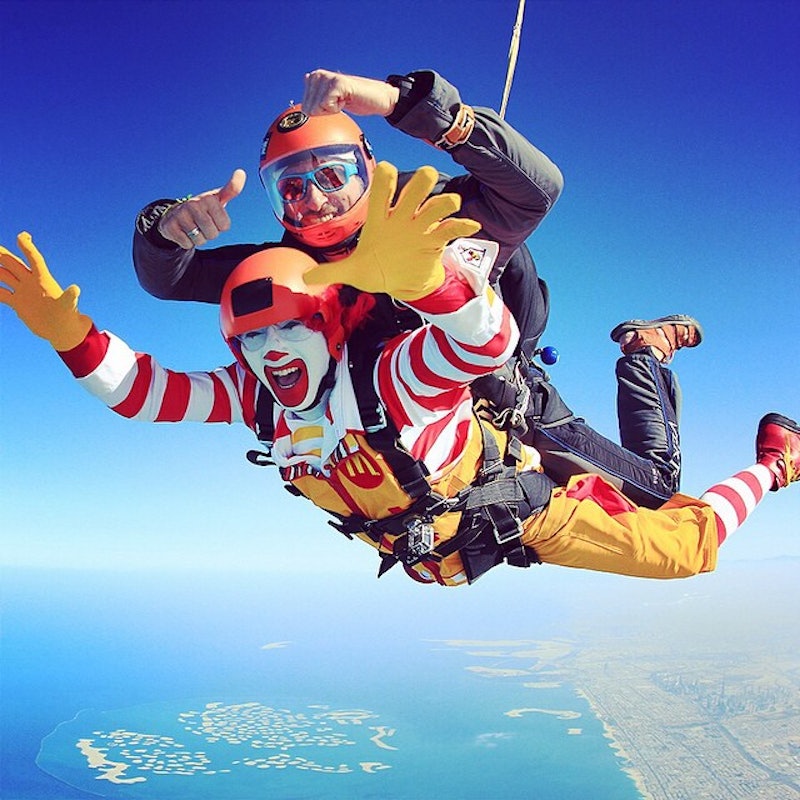 Move over, Rihanna. You may have ruled the Instagram game once upon a time with your tropical beach shots, your fierce fashion pics, and your general gorgeousness, but there's a new photo-sharer in town. Some of you (me) may know him as that terrifying man in the clown suit who sometimes pops up at McDonald's when there's a promotion, but most people know him as Ronald McDonald. Apparently, the Mickey D's mascot has completely revamped himself (aka the chain hired a really good social media team) and now Ronald McDonald is totally winning at Instagram. Now, instead of Rihanna's account, I find myself perusing the clown's Instagram and thinking, "Man, I wanna be about that life."

Once a tame clown known for his noble deeds and cavorting with the likes of Mayor McCheese, the Hamburglar, and Grimace, Ronald announced in April that he would be getting a makeover. It was time to ditch his tired parachute-pants-jumpsuit-combo and join the 21st century — whatever the 21st century means to clowns. Ronald said in a statement at the time:

Selfies…here I come! It's a big world and now, wherever I go and whatever I do...I'm ready to show how fun can make great things happen.

And now, judging by his social media presence, he's making good on that promise. Ronald is now a world traveler, extreme-sports enthusiast, and selfie taker with sick filtering skills. In other words, he's a baller. If you don't believe me, just feast your eyes on this GoPro video of Ronald skydiving in Dubai. I repeat, that's a video of Ronald McDonald skydiving in Dubai. Ronald McDonald is truly about that life.

If you need more proof, here's a sampling.

I'll give credit where it's due, Ronald. That's an awesome shot.

He really wasn't kidding about the selfies, huh.

This seriously kind of looks like an Annie Leibovitz shot. I can't believe I'm saying that.

Was Ronald featured on The Coveteur??

Okay, this is just next-level. It's three separate pics lined up to make one big pic. Stop it, Ronald. You're putting us all to shame.

More like this
The Best Memes & Tweets From The 2022 Met Gala
By Olivia Rose Ferreiro
What Is Jeanie Buss' Net Worth? The Lakers President Is Uber Rich
By Hugh McIntyre
Jake Daniels Just Became The UK’s First Active Football Player To Come Out As Gay Since 1990
By Sam Ramsden
Prince Harry Spoke Out About Archie & Lilibet’s Futures And What Worries Him The Most
By Sam Ramsden
Get Even More From Bustle — Sign Up For The Newsletter