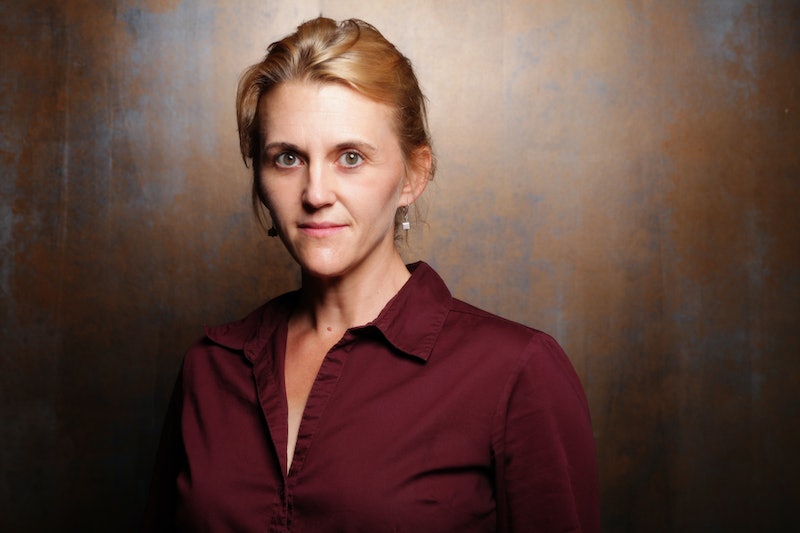 It was a banner year for essay collections — names like Roxane Gay, Lena Dunham, and Leslie Jamison come to mind without hesitation — and Meghan Daum's The Unspeakable (Farrar, Straus & Giroux) rounds out the string of excellence. It's Daum's second essay collection; she's also written a novel and a memoir, and also writes a weekly Los Angeles Times opinion column. In our conversation I was tempted to ask her how she does it all, and so well, but I just assume she's supernatural... so we spoke mostly about The Unspeakable.

Other people may not be good at launching the discussions that Daum raises — things like societal expectations of grief; exploring whether or not to be a mom; and, just the run-of-the-mill chance to play charades with big-name movie stars. But in her essays and in our conversation, Daum is witty and insightful, and delves comfortably into things people don't discuss as often as the weather and commutes.

With humility and humor and thoughtful sensitivity, Daum writes about things that will resonate with Millenials and their mothers. Take her observation in "Not What It Used to Be":

I am nostalgic for my twenties ... but I can tell you for sure that they weren't as great as I now crack them up to be. I was always broke, I was often lonely, and I had some really terrible clothes. But my life was shiny and unblemished. Everything was ahead of me. I walked around with an abiding feeling that, at any given time, anything could go in any direction.

It's so resonant. If I were a betting woman, I'd say Daum's essays will land on nonfiction course syllabi for essayists of the future.

I spoke with Daum on the phone about the themes she explores and the questions she asks.

BUSTLE: So the overarching theme of these essays, you've said, is "emotional dissonance" — feeling differently than how you ought to. In "Matricide" you explore the tension between prescribed grief and your actual feelings. Do you think the prescribed feeling is a socially constructed concept, or is it a purely personal idea of what's expected of you?

MEGHAN DAUM: I think we put socially constructed ideas on ourselves. It's a particularly American idea, and I've noticed that people not from the United States are perplexed by it. It comes from how our narratives are put upon us.

I was interested in how we are expected to change and what if that doesn't happen. When my mother was dying, I thought about the pressure on me and the pressure I was putting on her to find meaning in her life. It's a particularly American need to enhance the emotional reaction to events, and sometimes we don't know how we feel! And we're not allowed to say that.

I enjoyed how you dismissed the need to chart growth or derive meaning from significant experiences. And you said in an interview with NPR that you stayed the same person after your sudden, serious, freak illness. Is there an age, do you think, at which personhood is more or less stabilized?

That's interesting. They always say the music you like in your teens and early 20s is wired into your brain and your brain kind of closes off. Obviously, everyone is different. I don't know if the word is "stubborn" or "consistent," but I've always been the same in my tastes and preferences. In my 20s, I was a more extreme version of myself, meaning now I am more toned down.

The comfort zone is totally underrated.

Certainly the edict in our culture is that everyone changes. That in itself is a kind of tyrrany. The value of staying the same is not emphasized enough.

In "Difference Maker" [Daum's essay about being a role model to kids, and considering parenthood] your analysis of the difference between authentic living and romantic living was really resonant. How do you define authentic living?

For me, it has to do with feeling I'm in the right life. By definition, it's visceral. It's the feeling that you are living your life versus playing a role. It's saying: "These are my limitations, let's move on." I think the comfort zone can be highly, highly useful! It helps you live authentically. The comfort zone is totally underrated.

Totally. It makes me think of that scene in Girls where the ridiculous editor tells Hannah to "make the magic happen" outside her comfort zone, and things go horribly wrong when she tries cocaine.

I know! A recipe for disaster.

So you write about yourself and your experiences. Do you ever have trouble gaining enough distance to analyze yourself?

I don't start unless I have distance. The great luxuries I have are time, my editor, the ability to revise. "Matricide" took me a year and a half to write. It was very difficult to write.

I think one of the hard things about content in 2014 is that young people have to write so quickly for blogs and sites. It's a huge disservice to writers and readers. I'm grateful to have been pre-blog when I was younger and starting out.

I admired how humble you come off when writing about being friends with Nora Ephron and being told Nicole Kidman wanted to play you in the potential movie version of your novel. But then I read your 2013 column about humility, and how people say they're humbled, but they're actually honored. What's your relationship with humility like? How has it changed over your career?

"Humbled" is one of those words that means its opposite. When people say they're "humbled," they're actually saying, "I am now bragging."

I am incapable of feeling anything but humility. If there are 500 comments on an article of mine, I will focus on the one negative comment.

In terms of that party, how could I not be humbled? It was ideal — a fantasy, to be a fly on the wall while these famous people play charades. The advantage of humility is you don't have to get dressed up.

I think social media has transformed bragging into sharing. I err on the side of not sharing enough, because I can't stand it.

We must feel our honorary dykery.

"Honorary Dyke" was a great essay. Who do you think awards the status — dykes? Society? How can I get one?

Oh, interesting — maybe it's me! I think we can only know it about ourselves. We must feel our honorary dykery.

Is there anything in your life that you haven't written about but feel you need to?

These pieces are all pretty recent — all written for this collection — so, no. There are things that are truly unspeakable, but of course I won't tell you what they are.

More like this
Watch The Emotional Trailer For Dolly Alderton’s 'Everything I Know About Love'
By Bustle UK
Zosia Mamet Opens Up About Her Eating Disorder
By Zosia Mamet
10 Must-Read New Books Out This Week
By K.W. Colyard
How Reality TV Stars Conquered Your Bookshelves
By Anna Peele
Get Even More From Bustle — Sign Up For The Newsletter