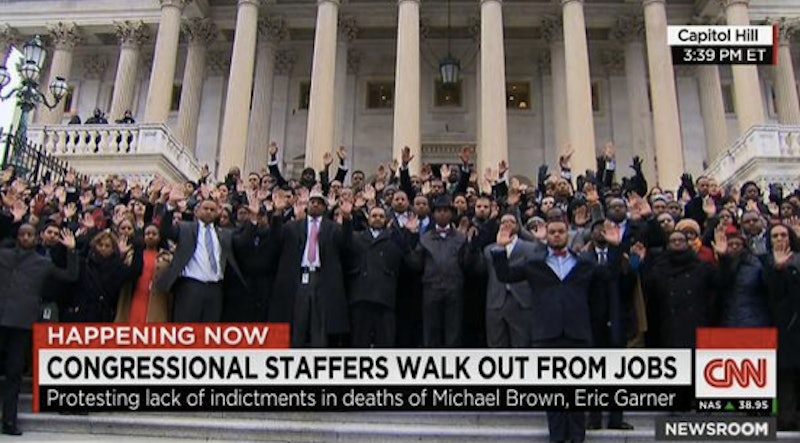 The protests against the Michael Brown and Eric Garner decision have reached the streets of cities across the nation, but on Thursday, they reached the steps of the Capitol. In a beautiful display of solidarity, dozens of congressional staffers walked out of Congress with their hands held up in what has become the universal sign of protest against police brutality, racial inequality, and a failing justice system in the United States. Those who participated, led by Senate chaplain Barry Black, painted a powerful picture of the strength of the movement, as Americans who work in the very seat of political power took a stand against what has become a nearly unspeakable injustice.

...what affects one community really affects the entire country. It's not just one group of minorities that's affected. How one group is treated affects Asians, Hispanics, women. It's important that we show our solidarity and come together and really speak out about the injustices that are being done.

Another staffer told the news network, "We're proud to have this moment of solidarity with the families of Michael Brown and Eric Garner and the thousands of peaceful protesters around the country who are telling this country that black lives matter." At least 50 staffers participated in the event, and the event comes after weeks of protests from private citizens throughout the country.

The timing of the walkout also highlights the ongoing partisan battle that has also played out in the aftermath of the grand jury decisions, as Republicans and Democrats continued to do battle within Congress on the spending bill that needs to be passed in order to prevent yet another government shutdown. But despite this political and economic chaos, Rep. Elijah Cummings (D-MD) said in a statement,

Democrats and Republicans across the country are incredibly frustrated by what happened in Ferguson, Staten Island, and elsewhere, and this protest reflects the mistrust they have in the integrity of the criminal justice system. These congressional staffers put in incredibly long hours, nights, and weekends working to pass legislation to help people live better lives, so I fully support them taking a few moments today to pray with the Senate chaplain for Congress to take action to ensure that all Americans are treated equally before the law.

Rep. Joaquín Castro (D-TX), one of the few congressmen who participated, told the Huffington Post that the walkout was a reflection of "the best of American democracy." Castro also noted that he hoped the efforts and the issue could cross party lines, and that the Brown and Garner decisions have even made places "thought to be conservative," like Texas, support certain reforms, like body cameras on police. But even this move has met with skepticism from some, as one black staffer told the Huffington Post, "They want to put cameras on police officers, which is a great idea, but the Eric Garner case was seen on live TV; the entire world saw it. President Obama said protests are necessary. This is a necessary protest."

The group planned to take a photo to commemorate the event around 3:45 p.m., and shortly thereafter were led by chaplain Barry Black in prayer for the families of Brown and Garner, as well as for peace. As CNN points out, Black is known for his powers at the pulpit, as he famously opened last year's congressional session with a prayer asking for lawmakers to put aside partisan politics for the good of the nation. At the time, he told Anderson Cooper, "My prayers simply reflect the reality of the environment that I am in."

And the reality of Black's current environment, many have found, is an ugly one. One staffer told the Huffington Post, "We're coming out here to let them know, no, it's not business as usual, our lives matter, we're asserting our humanity and our dignity," and another added, "Even though we go to work in these prestigious buildings among prestigious people, we go home and we're still profiled, we still are part of those statistics. It could have been any one of us who was Eric Garner, who was Mike Brown."