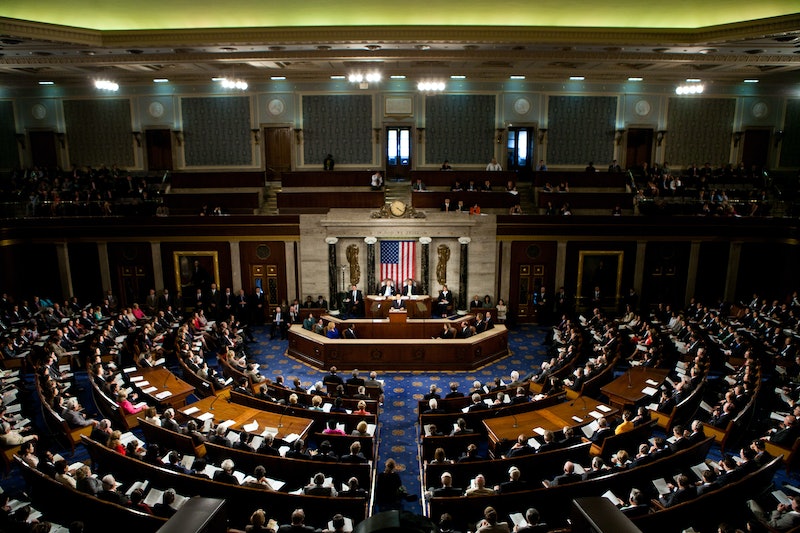 Cutting it dangerously short to the deadline that would have shut down the government, the House of Representatives has passed a $1.1 trillion spending bill. The bill, which has been contentious from the start, created deep divides both between and within the parties, with Democratic leader Nancy Pelosi taking a rare stance against the president, saying, "I’m enormously disappointed that the White House feels that the only way they can get a bill is to go along with this," after comparing the bill to blackmail. Regardless, both sides ultimately admitted that its passage would be in the best interests of everyone involved, as the Republicans hope to start the next session with a clean slate, and Democrats look to avoid having to make any further concessions.

The bill allows for the continued operation of most federal agencies through September of next year, with the notable exception of the Department of Homeland Security, which only gets a pass until February 27. Still, the bill was necessary to avoid a full government shutdown, which would've been an unpleasant end to what is already being called the most unproductive Congress in recent memory. With a final vote of 219 to 206, the so-called "Cromnibus" spending bill cleared the House floor and will now move to the Senate for further debate.

The last few hours of discussion were heated and intense, with several Republicans backing out as debate raged on and further compromises were made. By the end of the night, more than 30 Democrats were convinced to vote in favor of the bill, whereas double the number of Republicans who had previously voted against the bill decided to withdraw their support. Partisanship, even in the face of default, remains alive and well in Washington.

Speaker of the House John Boehner noted that representatives "agreed to in this bill on a bipartisan, bicameral agreement. So while some members may have objected to this issue or that issue, nobody did this unilaterally. We've done this in a bipartisan fashion, and frankly it's a good bill." But Democrats like Pelosi sharply disagreed, noting the bill's conspicuous measures on Dodd-Frank and political contributions. As NPR's Ailsa Chang reports on All Things Considered, "Right now a person can give just under $100,000 a year to a party through its various committees," but "under this bill, that cap goes up to almost $800,000."

Surprisingly, one of the stronger alliances formed during the debate of the bill was the right-wing Tea Party with the more liberal wing of the Democrats, as both lamented the seeming takeover of Washington D.C. by Wall Street executives. Both groups were staunchly against the 2008 bailout, and it seems that we've now come full circle once again — Senator Elizabeth Warren (D-MA) said on Wednesday, "Who does Congress work for? Does it work for the millionaires, the billionaires, the giant companies with their armies of lobbyists and lawyers? Or does it work for all of us?"

These questions will have to be answered by Warren's colleagues when the Senate takes on the bill in the next few days.