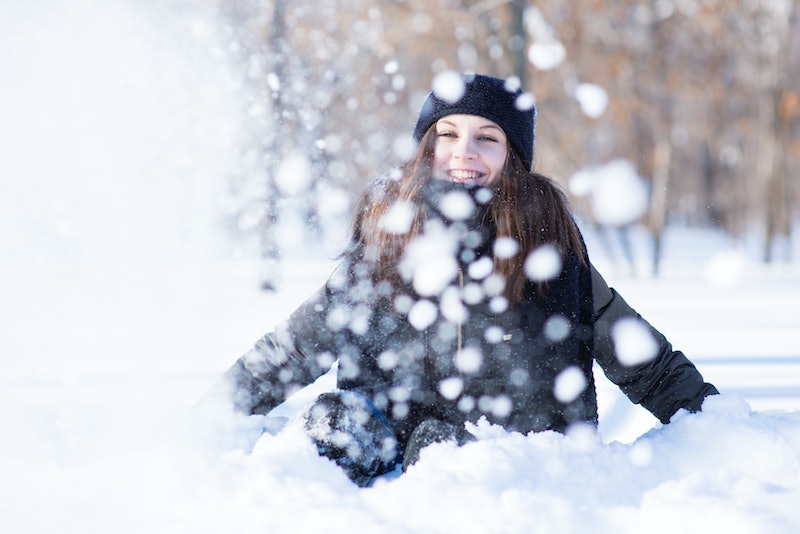 Guys? I know it hurts to think about, but whether you like it or not winter is upon us, and you can either embrace it, or huddle under a mountain of blankets grumbling about how you might never be warm again and consequentially miss out on all the fun things this season has to offer. I say embrace it — and there's no better way to get your priorities in line than by making a seasonal bucket list with winter activities you want to try at least once. Seriously. Don't be a drama queen.

Winter is a curious time of year. Yes, it's freezing. Yes, it's cold, and oh yeah, did I mention it's freezing? But once you're able to get past the chilly facade of this seemingly endless season, you really start to realize all the beauty the cold weather brings. There may be no sight more breathtaking than that of the first snowfall, and is there any other time of year when it's acceptable to sit wrapped up in a blanket doing nothing but sipping hot cocoa for three months straight? That's right. Winter's kind of awesome.

So enough complaining about how you have to get all bundled up to go outside, or how the water in your shower takes extra long to heat up. Instead, just own it. And here are 10 different ways you can do that.

1. Have a Snowball Fight

Sure, we've all made our fair share of snow angels and built some pretty dope snowmen in our day — but that's just not enough. Set up a full-on snowball fight with your friends. It's not winter until you've had a giant ball of ice thrown at your face.

2. Use an Outdoor Hot Tub

Admit it, hot tubs just make you feel cool. Guess what's even cooler? Hot tubs when it's snowing/raining/freezing outside. I didn't say it was smart. I said it was cool.

3. Toast Marshmallows in a Fireplace

There are few things as sweet in life as a freshly baked homemade pie, and I mean that both literally and figuratively. Not only will you have something to snack on for dessert and breakfast (you know, the best two meals of the day), but your home will smell like Martha Stewart is living there.

5. Get a Trashcan Lid & Go Sledding

I know that people say skiing and snowboarding are where it's at, and maybe they're right. But for those of us who want to keep things basic in the best way possible, there's nothing more fun than grabbing a trashcan lid and sledding down the slopes of your local park. Seriously, you'll probably laugh harder than you have in the past 10 years. Something about this activity just pulls out the child in everyone.

Once Christmas season hits, the store windows along Fifth Avenue in New York City are to die for. Who cares that you can't actually afford any of the stuff you're looking at? The displays become magical, and it's a sight that's worth seeing at least once in your life.

If you've never made your own gingerbread house, decorated it, and then picked it apart as a snack for the rest of the month, you are big time missing out. You know the self-satisfaction that comes with decorating your actual home? Imagine that but with sugar involved.

With traditions that range from a mouth-watering dinner to fireworks to little red envelopes filled with money, this holiday is something to get excited about.

What's the Polar Bear Plunge? Is that even a real question?! The Polar Bear Plunge is when the bravest and most fearless swimmers jump into a lake or ocean during the freezing winter months. Why? I don't know, but it's pretty awesome (and a lot of them actually raise money for charity). Find a Polar Bear Plunge near you (they're all over the place) if you're feeling ballsy this year.

More like this
How To See The Lunar Eclipse On May 15-16, 2022
By Kaitlyn Wylde
The 6 Best Balaclavas To Keep Your Face, Head & Neck Comfortably Warm
By Jenny White
Here’s Your Daily Horoscope For May 17, 2022
By Mecca Woods
25 Manifestation Quotes From Lady Gaga, Oprah, & More
By Megan McCarty
Get Even More From Bustle — Sign Up For The Newsletter