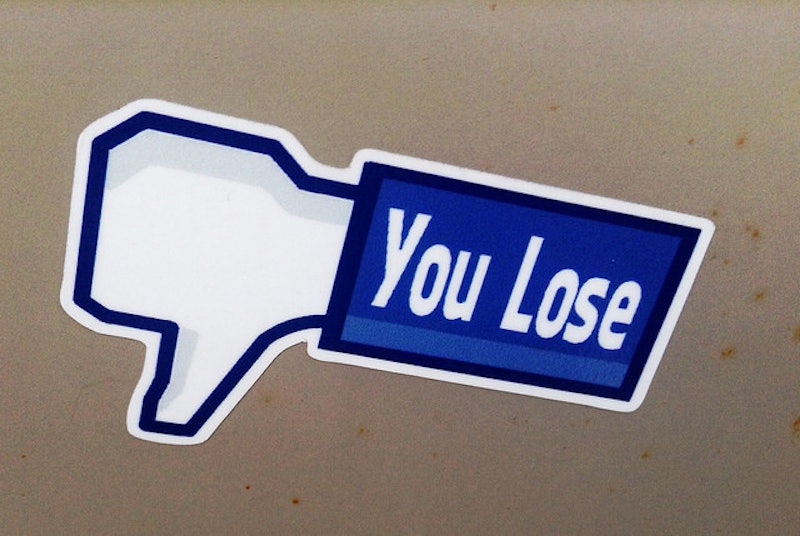 Imagine a world ruled by utter chaos, where emotional savagery drives the human race and we no longer know the difference between right and wrong. That is the world we'd live in if Facebook added a Dislike button. On Thursday, at a live Q&A event from the Facebook headquarters in Menlo Park, California, CEO Mark Zuckerberg entertained adding a Dislike button for Facebook when an audience member asked the question that many have been wondering. In short, Zuckerberg does want there to be alternatives to the Like button, which is perhaps maxing out its usefulness. But he said that the company would be very careful to make sure that the new feature won't be used for evil or take over the world.

"We're thinking about it, on the Dislike button," Zuckerberg told the crowd. Basically, such a button could mean two things and Zuckerberg would only consider doing one and not the other.

The Like button is very valuable because it's a way for you to very quickly express a positive emotion or sentiment when someone puts themselves out there and shares something. Some people have asked for a Dislike button because they want to say, 'That thing isn't good.' That's not something that we think is good for the world. I don't think there needs to be a voting mechanism on Facebook about whether posts are good or bad....

This would clearly turn people off from posting anything, ever.

The thing that I think is very valuable is that there are more sentiments that people want to express.

Here Zuckerberg is referring to the sad moments in people's lives, like when a family member passes away or they get divorced, and posts about culturally difficult events, like the recent turmoil over Ferguson. In those cases, people often don't feel comfortable pressing "like."

So what's the right way for people to easily express a broad range of emotions? To empathize or to express surprise or laughter or any of these things?

Right now, the Like button wears multiple hats. It essentially encompasses every positive emotion, like empathy or surprise or laughter.

There's something that's just so simple about the Like button. And I think giving people the power to do that in more ways with more emotions would be powerful. But we need to figure out the right way to do it, so that it ends up being a force for good and not a force for bad and demeaning the posts that people are putting out there.

So the Dislike button probably won't happen in the end, and not just for the reasons Zuckerberg listed but for one other glaring conflict — advertisers. No advertiser or business would be happy with a Dislike button because it would allow users to barrage their posts with disapproval (good luck, Ed Hardy). But even if it most likely won't happen, we'd like to imagine what would the world would be like with an all-powerful, unrestrained Dislike button.