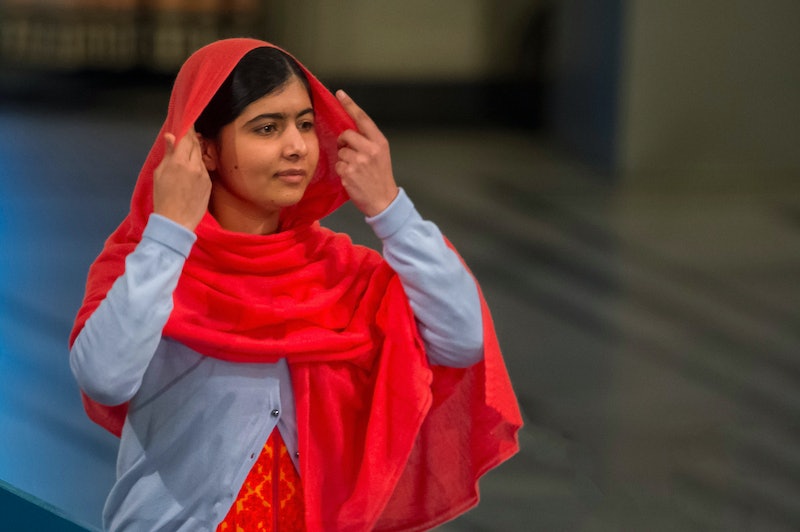 The world's favorite teenage Nobel Peace Prize winner, Malala Yousafzai, had an emotional encounter on Thursday, December 11, when, at an exhibition in Norway dedicated to her and fellow Nobel laureate Kailash Satyarthi, Malala burst into tears upon seeing the bloodied uniform she wore when the Taliban shot her on her way home from school.

The Nobel Peace Center held the exhibition in honor of the joint recipients of the 2014 Nobel Peace Prize, Malala and Satyarthi, who is an Indian children's rights advocate, at the Norwegian capital of Oslo. The youngest Nobel Peace Prize laureate broke down at the sight of her bloodstained scarf, jacket and trousers, displayed in a glass case at the exhibition. According to the Norwegian news agency NTB, Satyarthi attempted to comfort the 17-year-old he said he considered a “daughter,” hugging her and planting a kiss on her head, and said:

The Pakistani teenager, already somewhat known before the shooting for her courage in standing up to the Taliban to defend and advocate for women's right to education, was catapulted to international fame after a Taliban gunman shot her in the head and neck, nearly killing her. After a remarkable recovery in a hospital in the U.K., Malala continued her fight for educating girls, this time in the global spotlight.

Malala's family had kept her blood-stained school uniform since the near-fatal shooting in October 2012, and the teenager requested that it make its first public appearance at the exhibition. In the press release from the Nobel Peace Center, she explained:

My school uniform is very important to me because when I was going to school I would wear it. The day I was attacked I was wearing this uniform. I was fighting for my right to go to school, I was fighting for my right to get education. Wearing a uniform made me feel that yes, I am a student, I am doing it, practically. It is an important part of my life, now I want to show it to children, to people all around the world. This is my right, it is the right of every child, to go to school. This should not be neglected.

Both of this year's recipients hail from countries that have been at odds with each other for decades. The choice to declare both these extraordinary humans joint winners of the Nobel Peace Prize indicated a desire to "transcend differences and forge a common campaign in support of dispossessed children across the globe," wrote Alan Cowell at the New York Times.

Malala and Satyarthi, the 60-year-old activist who has been credited with rescuing an astounding 80,000 children from slave labor, received their awards from the Norwegian Nobel Committee on Wednesday. While collecting her prize in Oslo's city hall, Malala said: