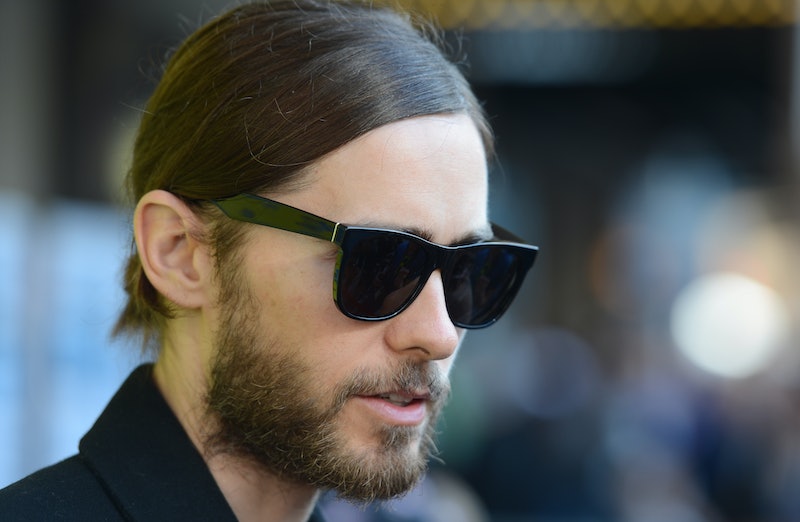 It's been 18 years since Jordan Catalano performed "Red" on My So-Called Life and now, guys, now you can relive the magic. Mostly. On BBC Radio's Live Lounge, Jared Leto sang Rihanna's "Stay" with his band 30 Seconds to Mars and it's haunting and lovely and nostalgic all at the same time. Plus, he's wearing reflective aviators and a leather jacket. What more do you want?

30 Seconds to Mars is the latest rock band to jump on the pop-cover train — last week, alt-country rockers Kings of Leon performed Robyn's "Dancing on My Own" on the same program. Hopefully, this trend will continue... I don't think I'm alone when I say I'd love to hear Ryan Adams perform "Wrecking Ball."

Leto's been focusing more on music than movies as of late, but he did work on the Dallas Buyer's Club, best known, right now, as that flick Matthew McConaughey dropped 40 pounds for. The film, about one man's battle with the establishment to procure medicine after discovering he's HIV positive, hits theaters Nov. 1 and has already received positive reviews. Leto plays a transexual AIDS patient who becomes McConaughey's partner in crime, and best friend.

But enough about acting and back to what really matters: the music, man. I'd like to draw your attention to the point in the song when he sings the line "reason to hold on," because it is then, people, when he reaches out his hand, closes his fist, then brings it into his chest.

It's a move that I'm pretty sure would've killed Angela Chase. Killed. Dead. Died. And you'll die, too.

And because why not, here's him performing "Red":