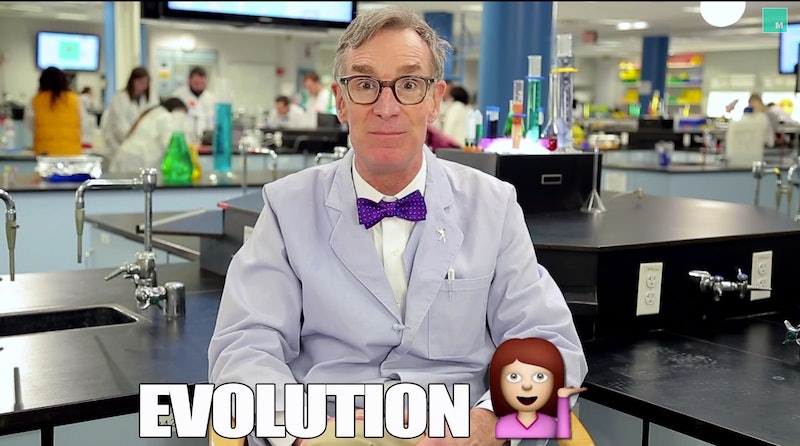 While the state of today's education system remains a strongly contentious topic, sometimes a spark of brilliance emerges from an external source taking things into its own hands. This time around, we have Mashable to thank for bringing together two unexpected, but equally awesome, forces for educational purposes — Bill Nye explained evolution with emoji in a video shot at an GE Emoji Science event in NYC, helping the younger generation understand the basic tenets of the concept in their (lack of) words.

The video features Nye in a chair, against the backdrop of a laboratory, in his signature glasses — now claimed by hipsters of the world to be their thing — and a purple, dotted bow tie. The charismatic Science Guy starts off with:

And he doesn't even bat an eyelid. That's how serious he is about evolution, and clearly, the use of emoji, too. Nye explains how molecules, with the sun's energy, reproduce themselves imperfectly, giving rise to multicellular organisms like "barnacles," "ivy plants," and even "my old boss." And then he goes on in an attempt to blow our minds with the earth's age — 4.54 billion, or 4,540,000,000 years old. How old are you, like, 30?

Although the majority of us learned about evolution by reading words in books, without the help of cartoon images. I'd venture to say this video serves a higher purpose, though, countering certain states' education board standards with conservative leans, presenting evolution as a theory — as opposed to fact — and promoting creationism (I'm looking at you, Texas.)

Evolution is a subject close the Science Guy's heart — earlier this year, Nye debated Ken Ham, a creationist and the president of Kentucky's Creation Museum that promotes the belief that dinosaurs and humans roamed the earth at the same time. Some criticized the debate for its implication that creationism held the same clout as evolution.

That aside, Nye does a pretty good job at explaining evolution in this video — though in all honesty, I was too tickled by the cartoon stickers popping up next to his face to really pay attention the first time around.

"This has been emojical science," he said at the end, in a hilarious attempt to explain his emoji-laden science lesson:

I mean, we used emoji to tell the story of science, emojically. Scienfitic emojinized... We shook it up with emoji, and we told a story — the way you might do if you had too many, um...jello shots.

And in case you were wondering — yes, Bill Nye has a favorite emoji.