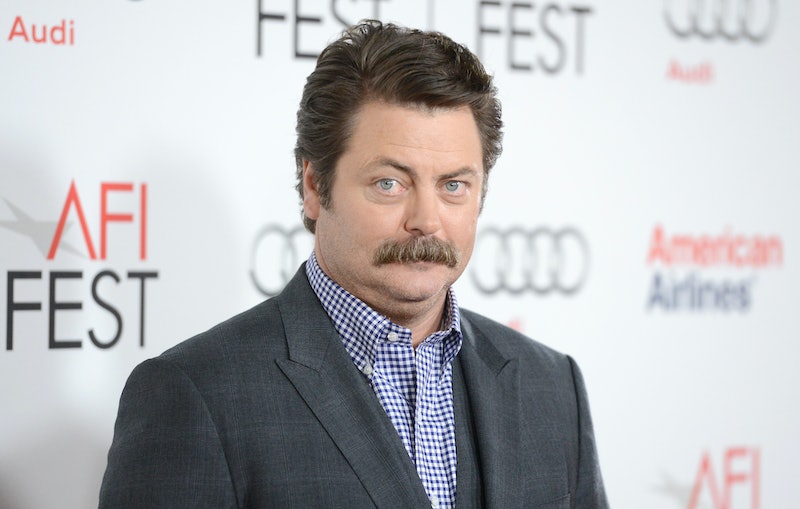 Nick Offerman is more at home on Reddit than almost any celebrity. On Thursday, Offerman did another one of his AMAs, and he always seems to deliver the exact brand of humor that Reddit loves. From folksy prose to blue collar jokes to outdoorsy tips, he is fully devoted to his character. Another object of his devotion? His wife, comedian Megan Mullally, whom he adorably showers with praise whenever he gets the chance. And he does have some pretty great wisdom on romance. Pay attention, Reddit.

This time around, Offerman appeared on Reddit to promote his new Netflix special, called American Ham, which premiers Friday December 12th. He also promoted his book, Paddle Your Own Canoe, as a good holiday gift for all the Ron Swanson fans and aspiring lumbersexuals out there.

Here are some of his best answers from Thursday's AMA, ranging from the silly to the... well it's all pretty silly.

Reddit User dsorrells09: How do you control that wonderful mustache of yours?Offerman: It is I who am controlled by my whiskers.

Reddit User Roxstein: If you could give one piece of advice to a budding facial hair enthusiast, what would it be?Offerman: Go learn a skill for 5 years. Come back after that and check progress in mirror.

On His Feminine Side:

Reddit User manetto: Are you in touch with your feminine side?Offerman: When she'll have me.

Reddit User sandym2000: Hi, how was it to work on Last Week Tonight? I was pleasantly surprised when you popped up on the screen. You were really funnyOfferman: I honestly think that is the most effective news program happening today, or this week rather, and it's also britches-shitting funny. It was an honor.

Reddit User Mischlecht: I recently became an engaged man. What is one piece of advice you may offer up to help lead to a successful marriage? I see you and Megan seem to have quite a happy, healthy relationship many must be envious of.Offerman: Listen. Learn to listen as well as possible. Swallow your pride in a fight. The sooner you can release your need to be right, the sooner you can come out from under the table.

Reddit User Pop_Quiz_Hot_Shot: Which do you prefer, Chubby Pratt or Six Pack Pratt?Offerman: Christopher Pratt is one the most beautiful creations of Mother Nature's that I have countenanced in my lifetime. Whether the bear is lean from the winter or fattened by sweet summer berries and springtime salmon, it makes me no never mind in the love I bear for him. He's still a magnificent beast.

Reddit User ginalo: Nick! If you could be any other character on parks and rec who would it be and why?Offerman: L'il Sebastian because then I would be the universe's MOST GLORIOUS CREATURE.

Reddit User Booty_Connoisseur: Who wins a fight...You or Aziz Ansari?Offerman: Duh. Aziz. He would disarm me by saying something super hilarious, then whilst I giggled he would nimbly kick me in the bean bag and scurry away. This has happened. He's a funny man.

On His Wife (Megan Mullally):

Reddit User justkeeponlivin: What is the most beautiful song you've ever heard?Offerman: When my wife and I met doing a play at The Evidence Room in LA, we were backstage and she whisper/sang In The Gloaming into my ear. I busted out my MetroCard and hopped the express train to BONER TOWN.

Reddit User DisPick: What is it like being married to Megan Mullally? You both are hilarious!Offerman: I never dreamed my life could be so full of bounty. It keeps me vigilant to mind my manners so that I will not anger the greater powers. (Gandalf, Galactus, Patton Oswalt)

And, Finally, On His Struggles:

Reddit User wesknowsbest: What's the most challenging part of being Nick OffermanOfferman: Penis is wider than it is long.

More like this
Who Is Tatiana Maslany Dating? The 'She-Hulk' Star Is Married To 'A Locke & Key' Actor
By Radhika Menon
'Indian Matchmaking's Arshneel Is Keeping His Potential Courtship With Rinkle Private
By Radhika Menon
'Selling Sunset's Jason Oppenheim Has A New Model Girlfriend
By Alyssa Lapid and El Hunt
Brad Pitt’s Recent Dating History Includes A German Model
By Brad Witter
Get Even More From Bustle — Sign Up For The Newsletter