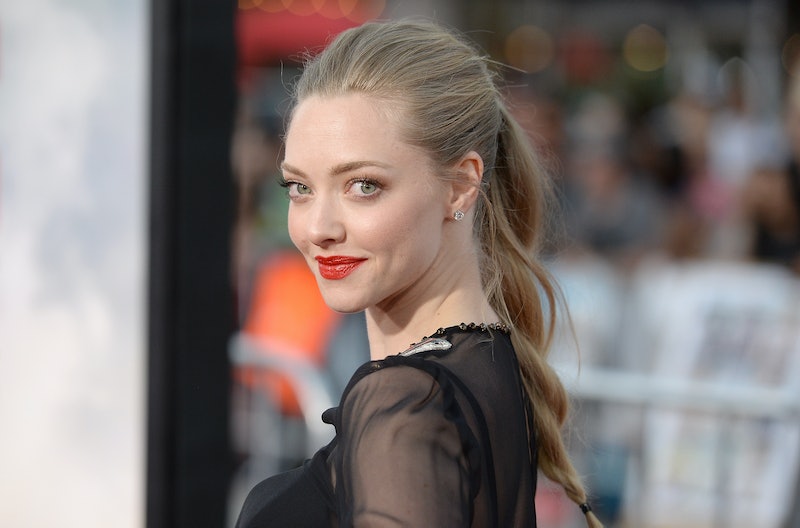 If you're looking for a new body-positive role model, look no further than Mean Girls and Mamma Mia! actress Amanda Seyfried. In a recent interview, Amanda Seyfriend was unapologetic about indulging in delicious food during the holiday season. “If I want to eat it, I’m going to eat it. Life is short,” Seyfried said at the 19th Annual ACRIA Holiday Dinner in New York City. “[But] I have a steady workout regime.”

Although quotes like Seyfried's might seem simple on the surface, they can help tremendously in making a positive impact for people struggling with food issues. She shows that it is possible to maintain a healthy lifestyle while not completely giving up certain types of food. It's also important to note that the holiday season can be a difficult time for those overcoming food issues and eating disorders, especially since it's highly expected in American culture to enjoy hearty amounts of food at the dinner table during those days of celebration. So it's particularly commendable that she said this while the holidays are in full swing.

It's also not the first time the actress has spoken out about her body philosophy. In November, she revealed that she nearly lost roles in Hollywood because she was considered "overweight."

In an age when celebrities — especially female celebrities — are expected to be slim by default, it's encouraging to see her speaking out about enjoying food and telling the naysayers that they are wrong about the way they see her weight. If people struggling with food issues can see that she is happy and healthy at her size, maybe that will inspire them to enjoy their food in moderation — and also kick some butt at the gym if they see fit.

According to Glamour, the actress said in 2010 that exercise was important to her work, and that it played a huge role in helping her keep her figure on point. But even then, she made a point to call out Hollywood on its unrealistic standards for women's bodies:

If I didn't run and work out, there's no way I would be this thin... But I have to stay in shape because I'm an actress. It's f--ked up and it's twisted, but I wouldn't get the roles otherwise. If I'd been a bit bigger, I don't think they would have cast me for Mamma Mia!

Seyfried's honesty about her regime and her outspokenness about enjoying food and working out is very refreshing. Let's hope that she continues to inspire others with her openness, and that more actresses follow her lead in body positivity.

More like this
Amanda Seyfried Reflects On 'Mean Girls' & "Gross" Remarks That Men Made After It
By Jake Viswanath
Amanda Seyfried Says This One Thing Stands In The Way Of ‘Mamma Mia! 3’
By Jessica Wang and Nola Ojomu
Doja Cat Needed Tonsil Surgery & Now She Can't Eat Taco Bell's Mexican Pizza
By Jake Viswanath
Britney Spears & Sam Asghari Announced Their “Devastating” Pregnancy Loss
By Stephanie Topacio Long
Get Even More From Bustle — Sign Up For The Newsletter