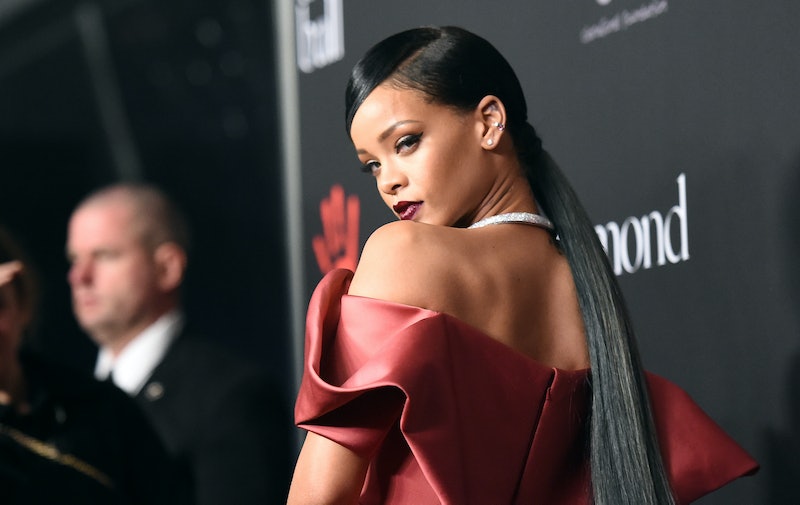 So last night, Rihanna held her inaugural Diamond Ball, a fundraiser gala set to benefit Rihanna's own Clara Lionel Foundation. The Clara Lionel Foundation was named to honor her grandparents — how cute is that? Apparently, its mission is to "improve the quality of life for communities globally in the areas of health, education, arts, and culture," which is a pretty bulletproof (if a bit lofty) set of goals, if you ask me.

Anyway, enough with philanthropy; let's talk about clothes. For the red carpet, Rihanna donned the most gorgeous, heavily-structured, mermaid-worthy red Zac Posen confection of a gown. It was absolutely amazing and garnered buckets of buzz all over the internet — but it wasn't the only dress she wore for the evening. For her performance, she changed into another Zac Posen number that was, if at all possible, even more fabulous. A tall order, I know, but when you see the dress you'll know that it's well up to the challenge.

It's actually a familiar silhouette for the designer — we've seen similar looks on both Fan Bingbing (at a premiere for X-Men: Days of Future Past ), and Liu Wen (at the 2014 Met Gala) respectively. They absolutely killed it, but Rihanna's take on the look might be even better. After all, Zac admitted over Instagram that she called it "Batman meets Mary Antoinette" (not sure if the misspelling and/or mispronunciation is Zac's or Rihanna's), which couldn't be more accurate. I mean, take a look at it in action:

Can you imagine anything more fabulous? (Also, let's start a petition for Rihanna to conduct anything and everything from here on out. Berlin Philharmonic, here she comes!).

Batman meets Marie Antoinette... A kind of perfect description for Rihanna herself, if you ask me — with a few minor adjustments, of course. Because while I can fully imagine Rihanna vigilante-ing her way through Gotham and/or being the most fashionable woman in 18th century Versailles, there's no way she'd ever deign to say "Let them eat cake." After all, she's got a foundation to think of!