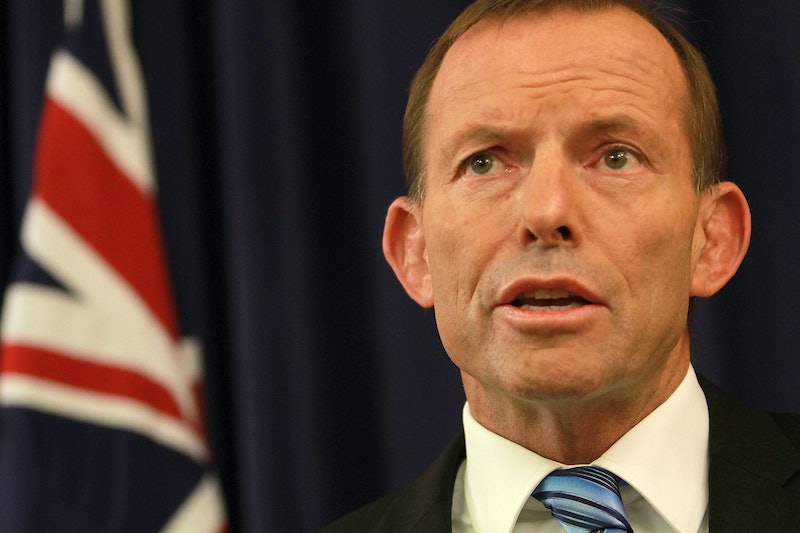 It looks like that infamous "Misogyny Speech" must have really sunk in. After being lambasted for being misogynistic by former Prime Minister Julia Gillard in 2012, Australian PM Tony Abbott slammed colleagues for being sexist in their criticism of the country's female Chief of Staff, Peta Credlin. (Many members of Parliament have griped that Credlin has too much power.) It's a noteworthy move because Abbott's image was questioned after Gillard's rather epic speech, in which she accused the leader of the opposition at the time of "peddling a double standard."

This week, the already brewing tension between Credlin and Minister of Foreign Affairs Julie Bishop reached a boiling point when Abbott's office vetoed Bishop's request to attend a UN climate summit in Peru. This slight was just the latest piece of evidence of increasing tension between the two elite leaders in Abbott's cabinet. This tension has drawn criticism from MPs who are concerned that Credlin's micromanaging is creating serious dysfunction within the government. Earlier in December, numerous members of the Coalition made public but anonymous complaints accusing Credlin of having too much influence over Prime Minister Abbott and isolating him from his cabinet.However, according to the Cranberra Times, many of Credlin's critics admit that her competence is not in dispute, and in fact she may be "too good" at her job. So what exactly is the problem? That's the point Abbott aimed to make when he appeared on ABC News Breakfast on Friday and called out Credlin's critics.

Do you really think that my chief-of-staff would be under this kind of criticism if her name was P-E-T-E-R as opposed to P-E-T-A?

When the anchor asks to confirm that he's referring to his colleagues, Abbot simply says:

I think people need to take a long hard look at themselves with some of these criticisms.

This isn't the first time Abbott has called sexism. In 2012, after Speaker of the House Peter Slipper allegedly sexually harassed an openly gay male staff member in text messages, Abbott called for Slipper's resignation and condemned Gillard's inaction, saying, "Every day the prime minister stands in this parliament to defend this Speaker will be another day of shame for this parliament, another day of shame for a government which should already have died of shame." The "dying of shame" line was a jab at Gillard's recently deceased father, who a DJ had said "died of shame" over his daughter's government. So yeah, claws were out.

In response, Gillard fired back with an unrelenting 15-minute tirade, in which she said:

I will not be lectured about sexism and misogyny by this man. I will not.... The Leader of the Opposition says that people who hold sexist views and who are misogynists are not appropriate for high office. Well I hope the Leader of the Opposition has got a piece of paper and he is writing out his resignation. Because if he wants to know what misogyny looks like in modern Australia, he doesn't need a motion in the House of Representatives, he needs a mirror.

Oh, but that's not all. Gillard then went into specifics.

Let's go through the Opposition Leader's repulsive double standards, repulsive double standards when it comes to misogyny and sexism.... He has said, and I quote, in a discussion about women being under-represented in institutions of power in Australia, the interviewer was a man called Stavros. The Leader of the Opposition says "If it's true, Stavros, that men have more power generally speaking than women, is that a bad thing?"

Nope, that's not all either.

And then a discussion ensues, and another person says “I want my daughter to have as much opportunity as my son.” To which the Leader of the Opposition says “Yeah, I completely agree, but what if men are by physiology or temperament, more adapted to exercise authority or to issue command?”

But perhaps one of the most damning comments Abbot's made was on abortion, which he called "the easy way out." In case you wanted to know, Gillard reminded the House of Representatives that Abbot made that comment in March 2004.

And so what is Abbott's agenda here? Why is he suddenly so impassioned by the fight against sexism?

And now, the Leader of the Opposition wants to be taken seriously, apparently he's woken up after this track record and all of these statements, and he's woken up and he's gone "Oh dear, there's this thing called sexism, oh my lords, there's this thing called misogyny. Now who's one of them? Oh, the Speaker must be because that suits my political purpose."

Hmm, this feels familiar. Could Abbott be speaking out against sexism now because it suits his political purpose? Either way, it was noble of him nonetheless to stand up for Credlin, a formidable woman who — let's be honest — he'd probably be lost without. Alternative headlines: Australian PM Tony Abbott Slams Sexist Critics of His Female Chief of Staff After a Splotchy Personal Track Record With SexismAustralian PM Tony Abbott Calls Critics of Chief of Staff Peta Credlin 'Sexist,' But Is He Really One to Talk?Images: Getty Images (3)