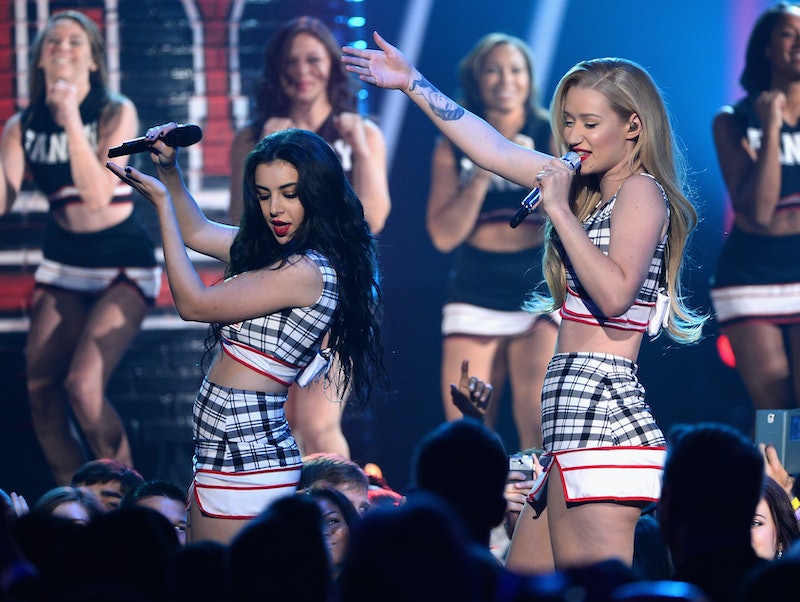 In a recent interview with Billboard, Iggy Azalea shares how "Fancy" came to be. According to the Aussie rapper, she knew the song had potential when she wrote it, but it “wasn’t a hit" and "needed something melodic." So, she brought in hit maker Charli XCX, Charli dreamed up the infectious hook, and BAM! "Fancy" as we know it was born. Iggy also reveals that the pre-Charli version of the song was not called "Fancy". It was called “Leave It”.

Because I am me, this lil tidbit prompted me to change the first line from the "Fancy" chorus to "I'm so leave it/You already know!" I could not stop laughing at this incredibly clever switcheroo.

Before I knew it, I'd amended all of the "Fancy" lyrics to match the former song title. I came up with some really beautiful and poetic stuff. I'm extremely proud of my work. Without further ado, here it is:

"Fancy" reimagined as "Leave It"

First thing's first, I’m gonna leave itLeave it and let the whole world leave itAnd I'm still in the leave it businessI could hold you down, like I'm givin' lessons in leavin’ it You should leave it like this Drop it low and leave it just like this Cup of leave, cup of it, cup of leave itHigh heels, somethin' worth leavin’ it on my wristTakin' all the liquor straight, never leave itLeave it like we bringin' '88 backBring the hooks in, where the leave it at?Champagne spillin', you should leave it

Trash the leave itLet's leave it on the mini barMake the leave itFeels so good leavin’ ih-ih-ihtYeah, keep on leaving it upChandelier swinging, we don't give a leave itFilm star, yeah I leave itClassic, expensive, you don't get to leave it

I think I have a knack for this songwriting thing.

More like this
Spice Girls’ Net Worth: The Richest Member Is Wealthier Than The Rest Combined
By Hugh McIntyre
Twitter Was Saying The Same Thing About Sam Ryder’s Surprising Eurovision Result
By El Hunt
Yomi Adegoke On The Offline Diaries & The Power Of Representation
By Jessica Morgan
The Music Industry Continues To Fail Black Women
By Precious Adesina
Get Even More From Bustle — Sign Up For The Newsletter