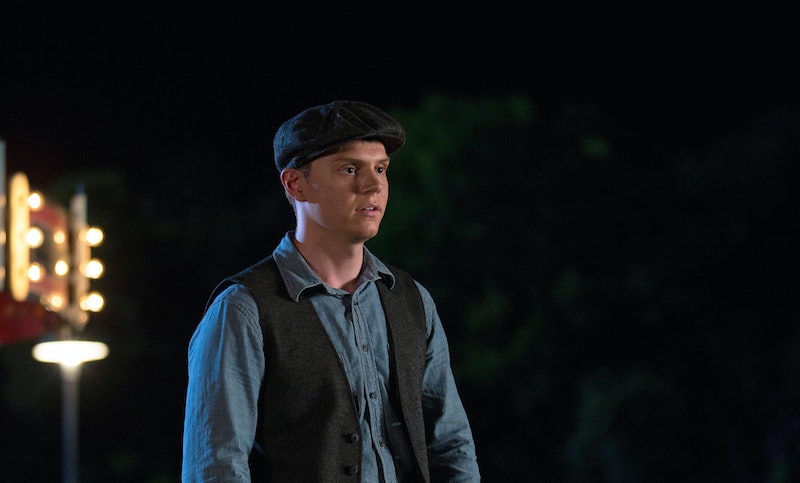 There was a heartbreaking moment during Wednesday night's onslaught of American Horror Story violence. After all the bloodshed and corpse puppets, Dot finally confessed her love to Jimmy and offered her and her sister's naked bodies to him "for his pleasure" (which is a whole other can of worms for another day). Unfortunately, Lobster Boy wasn't feeling it and that someone else had captured his undying affection. We naturally assumed that Jimmy is in love with Maggie (Emma Roberts). But what if we're wrong? What if Jimmy was actually talking about being in love with Ima, the newest "freak" in Elsa's menagerie?

It would certainly make up for the extremely uncomfortable scene in which Maggie fat-shamed Ima out of anger because Jimmy cheated. Maggie — who, up until that point, was supposed to be a sympathetic character for refusing to kill Ma Petite or Jimmy despite Stanley The 13-Inch Manly's demands — suddenly became a very ugly person, telling Ima that Jimmy was so drunk he would have had sex with a "donut or a pillow." Look, she was hurting because the man who wanted to run away with her was stinking drunk AND cheating, but the thing about grief is that it often brings ugly truths to the table. And from where I sit, Maggie's ugly truth is that she is a fat-shamer.

With that scene in mind, I actually don't think Maggie even deserves Jimmy. That was a low, low blow. And don't we always want Evan Peters' characters to end up with the nice girl (hence Taissa Farmiga's involvement in two seasons of Evan Peters obsession, er AHS)? Maggie is no longer a nice girl, in my book.

Plus, why else would they show this scene of Maggie showing such ugly behavior? Perhaps it was the writers' way of proving just how hurt Maggie was, but it doesn't play out that way. And while Jimmy's last words before he was shoved in the cop car — "Don't hurt [Maggie]!" — seemed to seal the deal that Jimmy was all about Miss Esmeralda, there are still a handful of episodes left. Wouldn't it be a little soon to seal the fate of Peters' romantic drama for the season?

What's more is that not giving Ima at least a shot in our minds really paints her in a bad light. Are we really going to let this woman be nothing more than a woman taken advantage of by a drunk Jimmy? The only other aspect we've seen of her character is that she eats large meals at Elsa's behest. Don't tell me you're prepared to let that be Ima's only AHS legacy, y'all.

Finally, the assumption that of course Jimmy loves Maggie and not Ima doesn't fit with the series itself. Look at the walking statement of Penny and Paul: He fell in love with her before her dad gave her a tattoo mask and a split tongue, but she says he still loves her post-transformation. It kind of sets the tone for acceptance of beauty in all forms — not just the forms that we see prescribed by society. And if Ima is considered a "freak" in 1950s Florida because of her size, then shouldn't she get the same level of respect as every other person at Elsa's camp? Isn't that the point of this show?

I understand that Jimmy & Maggie are #meanttobe in the minds of AHS mega fans because the actors are engaged in real life, but I'm just hoping we could all be a little less sizist when it comes to the romantic possibilities of this show.

And in truth, this is AHS, so we never really know anything until a two-headed corpse puppet is dangling in front of our eyes. Let us see where the chips fall next week.