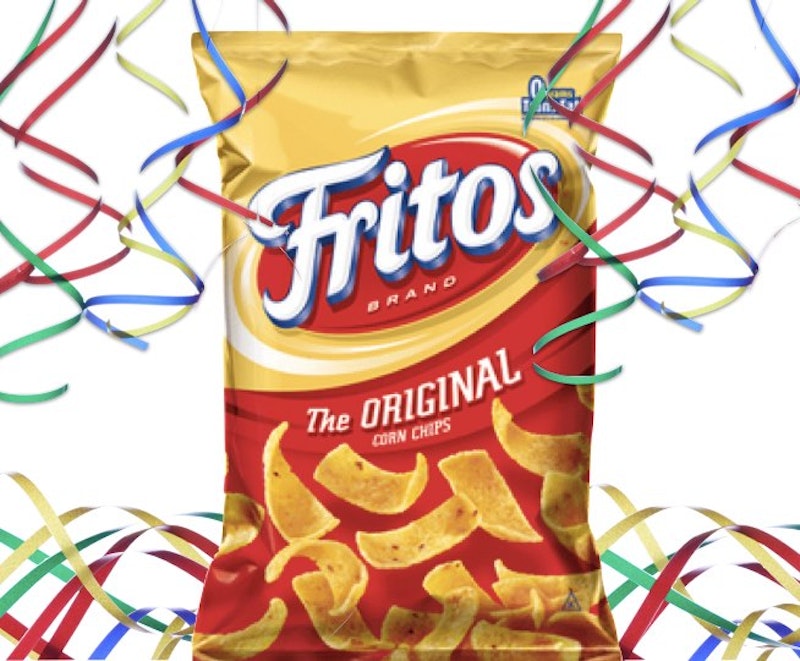 Hold the phone, you guys — it has just come to my attention that Taco Bell may have a Fritos taco in the works. You heard me: A taco…with a shell…made from the single largest Frito you’ve probably ever seen. It looks like the Doritos Locos Taco — which, by the way, the chain has officially sold over one billion of — was just the tip of the Frito-Lay ice berg when it comes to what Taco Bell has in store for us. Whether world domination is part of the plan remains to be seen, but, well…we all know the slippery slope down which Taco Tuesday can lead.

Okay, I’m kidding about the world domination thing — but the arrival of a Frito-shelled taco does look imminent. It hasn’t been confirmed by the brand, but according to Business Insider, the idea first reared its crunchy little head during a presentation Taco Bell’s parent company, Yum! Brands (P.S. How awesome is that name?), made to investors on Thursday, December 11. During this presentation, a slide was displayed featuring one tiny detail that bloggers everywhere who are unnaturally obsessed with weird fast food items (like yours truly) latched onto like limpets: A picture of a hard taco emerging from a Fritos bag. The Associated Press’ Candice Choi dutifully tweeted a photo of it; it looks like this:

Cue the heavy breathing and frantic hand flailing — or, depending on how you feel about Fritos as a snack food, the “yuck” faces and the eye rolls.

The image is a variation on an already successful theme; that’s why most of us are fairly well convinced that it means the Fritos taco will, in fact, be entering our lives at some point in the relatively near future. The promotional images of pretty much all of the menu items in the Doritos Locos taco family utilize the same idea:

Furthermore, the Taco Bell menu already features Fritos shoved inside some of its options (like the Beefy Fritos Burrito); it stands to reason that the next step is to “think outside the bun,” as they’re so fond of saying, and think of ways to put the Fritos on the outside, too. QED. Or something.

Twitter seems to be kind of torn about the possibility of a Fritos taco; some people love it:

While others are, shall we say, a little less than thrilled:

I’m actually not that over the moon about it myself; Fritos have always just tasted like really, ridiculously salty tortilla chips to me (Aaron Sechrist has a point). Every time I have them, I realize that I would much rather be eating the homemade chips from my favorite hole-in-the-wall Mexican restaurant, because those things are the best. But I get an enormous kick out of the idea of a gigantic taco-filled Frito simply being a thing that exists — so I’m willing to roll with it (even if I never eat one myself).

So there you have it. Again, it’s neither been confirmed, nor denied…but I think it’s pretty safe to say that it’s coming, whether you like it or not. Brace yourselves accordingly.