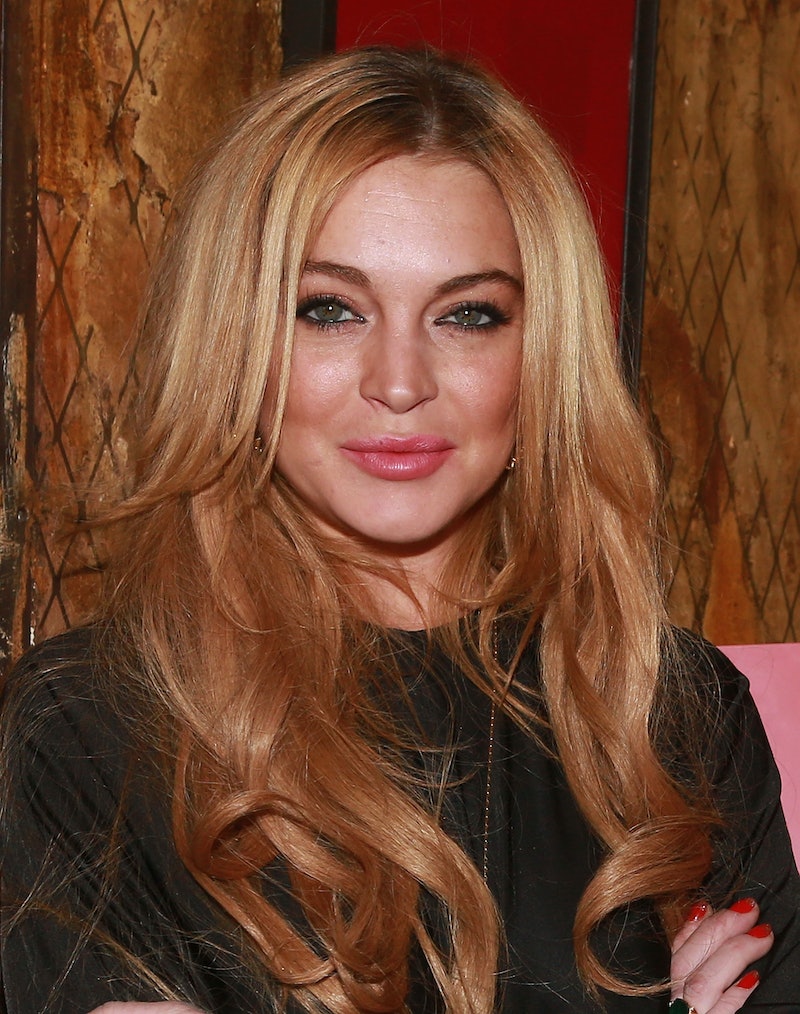 Lindsay Lohan is officially pulling a Kim Kardashian. Nope, she's not doing reality TV (again) or posing for the cover of Paper. The artist formerly known as Mean Girls' Cady Heron has released a game app for iOS and Android that allows you to work your way to fame, while also trying to gain fans and change your outfits in the process. That sounds juuuust a little familiar to me, but I'll let it slide. I'm always willing to give a new iPhone game a try — especially when I'm stuck on a level on Candy Crush Soda Saga like I am right now — and since, on the surface, Lindsay Lohan's iPhone game sounds a lot like Kardashian's game, it's probably fun enough.

The game is called "The Price of Fame," and Lohan first announced its arrival Friday on Twitter and her official website, proclaiming that "you can become a famous celebrity just like me, but there is a lot of DRAMA along the way!" The announcement was accompanied by a trailer that tells you absolutely nothing about the actual game, so I couldn't help but download it to find out what it's like for myself.

And now? I regret everything.

As far as I can tell, a lot of swiping is involved

That's, like, the whole game. You swipe up to get fans as fast as you can. And it gets pretty boring pretty fast. In fact, before you can even dress your character, you have to swipe to get to 400 fans. At that point, you're presented with a bunch of wardrobe options that you most likely cannot unlock this early into the game. Unfortunately, that means my character looks nothing like me — I was forced to become a blonde in a "goth wedding dress." No thank you!

Also, it may be just me, but I don't really see the "game" part of this

Unless, of course, you like swiping for no apparent reason to afford rather ugly fictional clothing. Then be my guest. I'm not here to judge.

To Lohan's credit, when creating your character, a message pops up that says, "Gender is a social construct, and so is your persona." A+ for that move, Team Lindsay.

It's not too far off from Lohan's actual reality

In the game, you can gain fans via all kinds of actions — these actions can be bought with coins earned by swiping (or by buying with actual money). In "Publicity Investments," you can earn fans without swiping by clicking to perform actions like releasing a sex tape, selling photos of your baby, or faking an illness. My personal favorite? Elevator fight. Then there's also "Conspicuous Consumption," where you can buy things like coconut water, Botox for children, and butt implants, that increase the amount of fans you get per swipe. In "Your Entourage," you can earn fans when the app isn't running — including people like Not Nice Girls, Michelle Obama Jr., and Trustworthy Weed Holder. Oh, OK.

When you dress your character (because I know you're downloading this as we speak), check out the various outfit options and chuckle as I did when you realize they include an electronic anklet and a jail outfit.

More like this
20 Celebrity Couples Who You Forgot Dated In 2002
By Jake Viswanath
The 10 Best Waterproof Watches For Swimming
By Lauren Moison
Marcus Rashford Took Inspo From Kravis For His Adorable Proposal To Girlfriend Lucia Loi
By Frances Stewart
Ryan Reynolds Brought Some Famous Friends To Wrexham A.F.C's Last Game Of The Season
By El Hunt
Get Even More From Bustle — Sign Up For The Newsletter