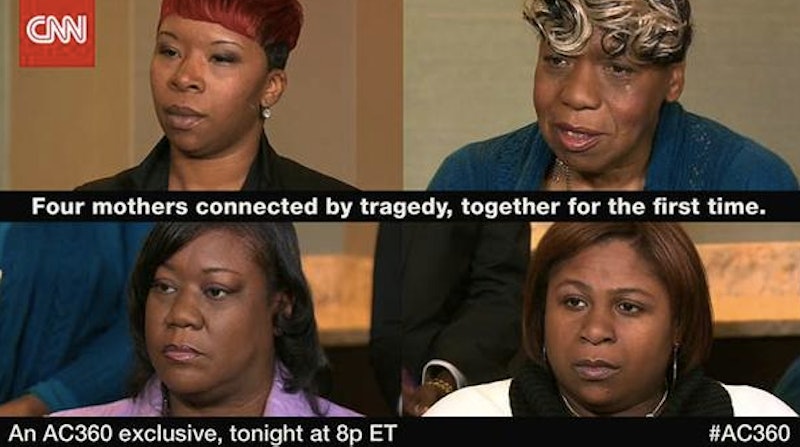 On Friday evening, four mothers came forward to tell the story of how they buried their children, a story that no parent should have to tell. Speaking with Anderson Cooper, the mothers of Trayvon Martin, Mike Brown, Eric Garner and Tamir Rice came together to discuss the horrific reality of police brutality in America, and its disproportionate effects on black bodies. The interview marked the first time that all four women came together on national television, highlighting the growing national discomfort with an insidious trend of violence towards black, brown and minority men and women at the hands of law enforcement officials, and the insufficiency of a legal system that seems unconcerned with their existence.

Martin's mother, Sybrina Fulton; Brown's mother, Lesley McSpadden; Tamir's mother, Samaria Rice; and Garner's mother, Gwen Carr, spoke to Cooper of the immense pain they each felt as they recalled their sons' deaths, and also reflected upon the inspiration, courage and strength they've drawn from the nationwide outpouring of support and protest that has resulted from these tragedies. And ultimately, these four remarkable women were able to note the incredible capacity for change and progress that their sons have catalyzed, giving a megaphone to a topic of discussion that is long overdue — race relations in the United States.

"I think absolutely my son's race and the color of his skin had a lot to do with why he was shot and killed," Fulton told Cooper. The death of her son, Trayvon Martin, in 2012 sparked national outrage both in the immediate aftermath of the case, when police were slow to press charges against George Zimmerman, and also following the Zimmerman's trial, when he was acquitted of both second-degree murder and manslaughter charges. Fulton added, "In all of these cases, these victims were unarmed. These victims were African-American. That needs to be our conversation."

Carr, whose son Eric Garner has been the latest unarmed black man to be ignored by the justice system, told Cooper that she had no doubts that Garner's skin color played into his demise. She noted,

If Eric Garner was a white man in Suffolk County doing the same thing that he was doing -- even if he would have been caught selling cigarettes that day — they would have given him a summons and he wouldn't have lost his life that day...I believe that 100 percent.

Carr's belief is one that has sharply divided the nation along racial lines — following the grand jury decision in Ferguson, a Pew Research Center poll found that 47 percent of white people surveyed thought that race was getting too much attention in the case, whereas only 18 percent of black people said the same. There remains a rift in the dialogue surrounding these cases — whereas for many African Americans, these latest injustices simply follow a pattern of historical discrimination and disdain for black communities in America, others continue to insist that our supposedly post-racial, colorblind society no longer takes into account skin pigmentation when addressing legal issues.

But as Fulton told Cooper on Friday, race plays an integral role in determining the sort of livelihood families and individuals alike are able to lead in the US. Addressing those who denied the role of race in these cases, Fulton said,

Samaria Rice's description of learning of her son's death makes painfully clear just how incomprehensible such a tragedy is from a parent's point of view. She recalled two boys knocking on her door to tell her, "The police shot your son in the stomach," and walking outside to witness the scene with "nobody...doing anything" to help her fatally injured child. One of her daughters screamed, "They killed my baby brother!" Rice's death was recently ruled a homicide, but with recent events, there remains skepticism over whether or not justice will be served.

Even video footage of Garner's death was ruled inconsequential when a grand jury decided not to indict Officer Dan Pantaleo on any charges, and despite numerous witness testimonies, the same outcome resulted in Brown's case. McSpadden told Cooper that she was sure a grand jury "would indict the officer that shot my son without a video tape," only to be proven horribly wrong after months of waiting for a decision.

"We have to change mindsets," Fulton said to Cooper. "We have to let people know that our children matter. Our sons and our daughters matter. We are hurting. This country is hurting." Fulton also noted,

When speaking of the protests that have erupted across the nation in response to their children's deaths, the women were in agreement — the outrage is justified and long overdue. Said Fulton,

I think this is shedding light to what's going on. This is not something new. It's been happening. ... But it's just been bringing light to what's happening. It's bringing it to the forefront which is why there's so much conversations. ... Because people are now realizing ... it's not just about African-American rights ... it's about human rights.