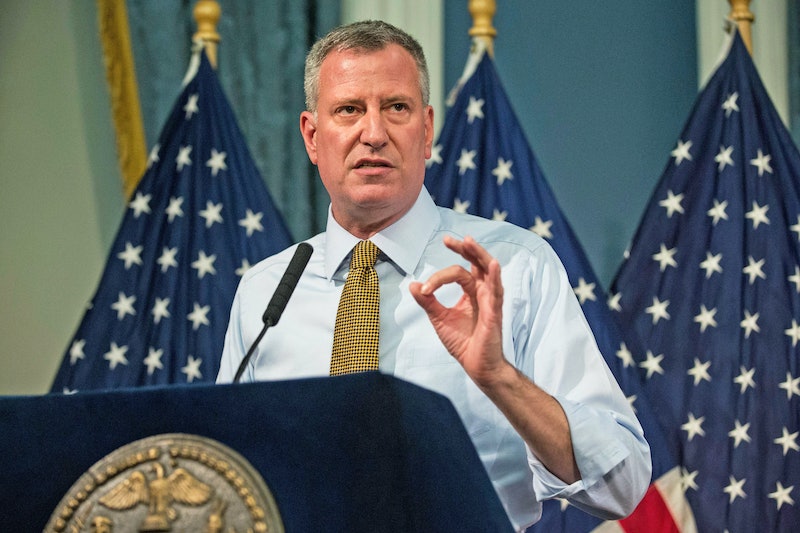 Tensions are at an all-time high between law enforcement and government officials in the aftermath of controversial grand jury decisions involving unarmed black victims Mike Brown and Eric Garner. Now, New York policemen are asking Mayor Bill De Blasio not to attend police funerals, following what the police union perceives to be De Blasio's consistent lack of respect for the sacrifices of law enforcement officials. The Patrolman's Benevolent Association (PBA) has produced and distributed a flier to its members, proclaiming, "DON’T LET THEM INSULT YOUR SACRIFICE!" Officers are encouraged to sign a waiver that would keep both Mayor De Blasio and City Council Speaker Melissa Mark-Viverit away from their funerals, should they be killed in the line of duty.

In the days and weeks following the non-indictment decisions, protests have raged across the country, pitting police against civilian demonstrators, and further underscoring the issue of police brutality in the United States. Given that both Brown and Garner were killed by seemingly over-zealous policemen, the nation certainly hasn't missed the irony of the seemingly heavy-handed approach to quelling numerous protests and demonstrations. Scenes from Ferguson following Brown's death and the grand jury decision looked more like a militarized police state than a democracy, and protestors have not overlooked the role of race in these tragedies. Neither has Mayor De Blasio, who incensed members of his local law enforcement when he told reporters at a press conference that he warned his mixed-race son, 17-year-old Dante, to exercise caution around police.

Said De Blasio, "We’ve had to literally train him, as families have all over this city for decades, in how to take special care in any encounter he has with the police officers who are there to protect him." While this may be a harsh reality for many black Americans, regardless of social or economic status, law enforcement agents perceived De Blasio's remarks as a direct attack on their service. PBA President Patrick Lynch said that the mayor's claims effectively threw the men and women in blue "under the bus," and showed a distinct lack of respect and appreciation for their constant sacrifice.

Consequently, the PBA has posted a petition that officers can download, sign and return to union delegates, titled "Don't Insult My Sacrifice." The document reads,

I, as a New York City police officer, request that Mayor Bill de Blasio and City Council Speaker Melissa Mark-Viverito refrain from attending my funeral services in the event that I am killed in the line of duty. Due to Mayor de Blasio and Speaker Mark-Viverito’s consistent refusal to show police officers the support and respect they deserve, I believe that their attendance at the funeral of a fallen New York City police officer is an insult to that officer’s memory and sacrifice.

This rather provocative waiver comes as a considerable public relations blow to the mayor, who traditionally attends funeral services of the fallen. And at such a politically and socially combustible time, it seems that such petitions are only fanning the flames to an already heated debate. In a joint statement by the mayor and the speaker, the two said,

This is deeply disappointing. Incendiary rhetoric like this serves only to divide the city, and New Yorkers reject these tactics. The mayor and the speaker both know better than to think this inappropriate stunt represents the views of the majority of police officers and their families.

Mayor De Blasio has certainly been an outspoken critic of the Eric Garner decision, and a strong proponent of retraining police officers to prevent such tragedies from happening in the future. In a press conference on December 4, the mayor said, "Fundamental questions are being asked, and rightfully so. The way we go about policing has to change." He also noted, "People need to know that black lives and brown lives matter as much as white lives." A retraining program is indeed in the works, beginning this month, and will require 22,000 officers to undergo a 3-day course, and is said to include de-escalation techniques, as well as a refresher on street tactics and "presenting a 'nonjudgmental' posture." Many of these lessons are initially taught in the Police Academy, but the retraining will serve as a reminder.

De Blasio has not been alone in his criticism of both law enforcement tactics and the justice system, with both New York Governor Andrew Cuomo and President Barack Obama expressing similar sentiments following the rulings. In a radio interview, Cuomo pressed for a comprehensive review of the entire criminal justice system, looking not only at police training, but also the grand jury process. Said Cuomo, "I think we should look at the whole system. This is not just Eric Garner. It’s not just Missouri. It’s bigger and broader." Recently, following a conversation with Mayor De Blasio, President Obama has made similar remarks, saying, "Too many Americans feel deep unfairness when it comes to the gap between our professed ideals and how laws are applied on a day-to-day basis."

But the PBA has lashed out particularly at De Blasio, who they feel should be offering more support following the immense public backlash that has, perhaps, unfairly affected many officers who were uninvolved with the incidents or the decisions. Following De Blasio's statements last week, Mr. Lynch noted,

What we did not hear, is that you cannot resist arrest. We did not hear that that’s why these police officers were at that location that day. The community called and complained and said there’s a problem at that location and we were asked to respond. If the mayor wants to change policies and wants us to stand down against crime then say that. It’s his policies that we go out and we enforce and the laws of the state of New York.

Now, insult is being added to injury from every angle with the petition, only reinforcing the "us against them" that has taken over the United States in the wake of the Martin, Brown, Garner, and Rice tragedies. Next Friday, the New York Post reports that a "Pro-Cop Rally" is being planned at City Hall, and only time will tell if Mayor De Blasio makes an appearance at that event.