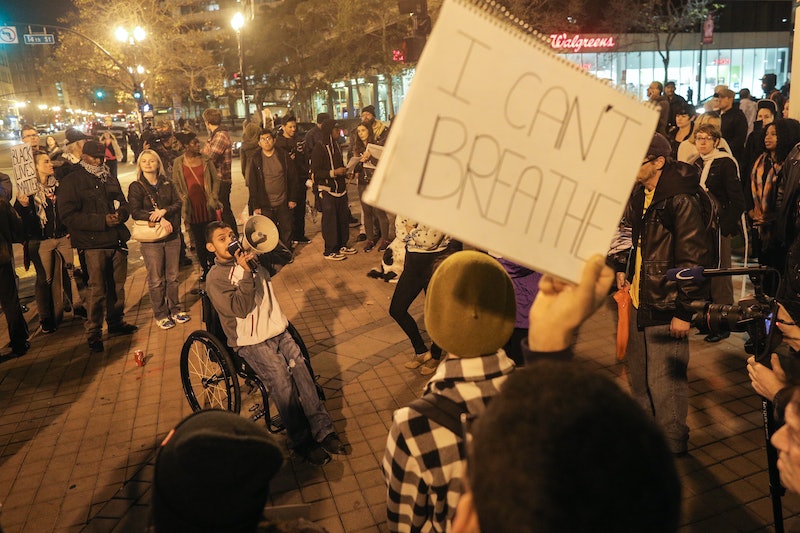 While thousands gathered in Washington, D.C. on Saturday to march in protest of police brutality and racial profiling, thousands more flooded the streets of New York City for the Millions March. Starting downtown in Washington Square Park, the march moved north on Manhattan's famous Fifth Avenue and headed toward Herald Square. Although the family of Eric Garner, a Staten Island resident and father of six who was killed by a New York police officer in July, was in Washington for Rev. Al Sharpton's national march, the protesters in New York honored Garner, chanting his last words: "I can't breathe."

These latest cases of police brutality hit close to home for New Yorkers—in addition to Garner, the protesters were asking for justice for Akai Gurley, a young African-American man who was killed by police officers in November. New York has been the site of police brutality, specifically against people of color, for years, and a growing number of families of police-shooting victims have also been speaking out for the first time in years.

Iris Baez, whose son Anthony died from a police chokehold in the Bronx in 1994, told Newsday that she flew from Florida to New York just to attend the large-scale protest in her son's honor. "I had to come home because there's a change happening," she told Newsday. "I feel that I need to be here."

Here's a breath-taking time lapse of the Millions March NYC, with a view from 6th Avenue and 29th Street, and incredible photos from the march:

Later in the day, the march turned back downtown via Broadway, taking over New York City neighborhoods.

Numerous celebrities came out on Saturday to support people of color and their communities. Protesters caught some of the cast members from Netflix's Orange Is the New Black in the streets, holding "I can't breathe" signs. Rapper Nas and hip-hop mogul Russell Simmons also took to the streets, marching alongside their fellow New Yorkers.

According to Millions March organizers, the demonstration grew to more than 50,000 people. Later in the evening, the thousands of protesters took over 1 Police Plaza, chanting "Not One More" as police officers quietly looked on.