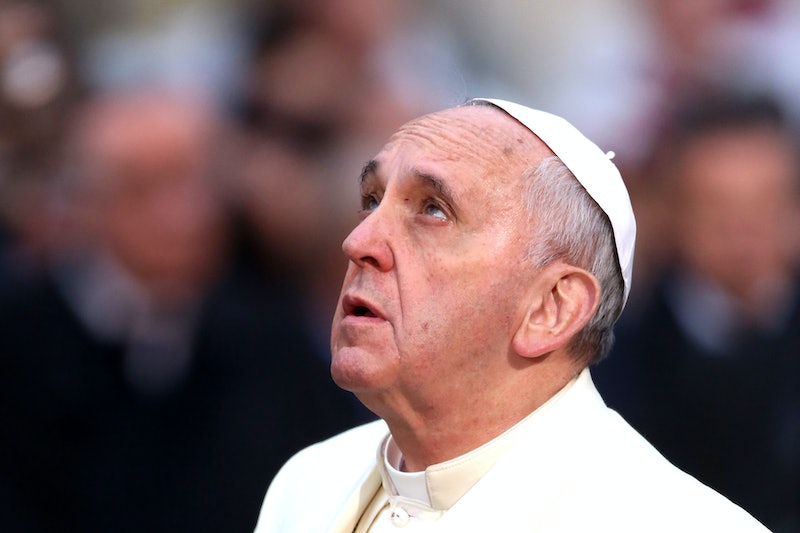 It was daring. Unbelievable. It made the front-page of the The New York Times: all animals are going to heaven. Yes, even your little guinea pig or street-fair goldfish. But as it turns out, what was widely attributed as a quote from Pope Francis may not be true at all. And the fate of your guinea pig's soul? Who knows.

The New York Times issued a mighty correction on Friday, partially retracting its resounding story on Francis' purported beliefs about animals and their chance to make it the paradise in the sky. It was initially reported that, while comforting a boy in Rome whose dog had just died, Francis told him, "One day, we will see our animals again in the eternity of Christ." The pope reportedly added that "paradise" is welcoming of "all God's creatures."

The story blew up, most likely because it sounds like a nice, inspiring, Francis-like story that rejects long-held Catholic theology: animals don't have souls, so they can't get into heaven. (Apologies if your childhood was a lie.)

But there's one little problem: Francis never said, "Paradise is open to all of God’s creatures" or that we'll see our pets again in heaven. As David Gibson of Religion News Service points out, those two quotes were actually said decades ago by Pope Paul VI. And as for that sad little boy who Francis reportedly told he would see his dog again in heaven? He doesn't exist, either—at least, not in 2014.

So here's what Gibson thinks happened: An Italian newspaper, Corriere della Sera, printed those quotes by Paul IV in relation to a public speech Francis gave on Nov. 26, when Francis discussed a "new creation." The Italian newspaper used the headline "The Pope and pets: 'Paradise is open to all creatures,' making it seem like Francis was the one who said that quote.

Then, the Italian Huffington Post published an article titled, "Pope Francis: 'We will go to heaven with the animals,'" writing that the pope was quoting St. Paul, not Pope Paul IV. The story snowballed from there, with news outlets falsely attributing those heaven-affirming quotes to Francis and, like The New York Times, changing the story from a public address at St. Peter's Square to a private conversation with a distraught young boy.

Although Paul IV did actually tell a young boy that his dog was in heaven back in the 1970s, it's still unclear if Francis agrees with that sentiment. So far, Francis has never said explicitly whether animals have souls that take them into the after-life.

According to Vatican Radio, here's what Francis did say on Nov. 26—notice how vague it is:

Holy Scripture teaches us that the fulfillment of this wonderful design also affects everything around us.

Does that still read like heaven "is open to all of God’s creatures?" Not really. However, given Francis' chosen name—after St. Francis of Assisi, the patron saint of animals—it is believable he would draw upon Paul IV's words and welcome our cats and dogs into heaven. I mean, this is the pope who believes atheists are able to have salvation and wants LGBT Catholics and their families accepted into the church.

Below is The New York Times full correction. Although the story has been amended with Francis' true quote, the titled, "Dogs in Heaven? Pope Francis Leaves Pearly Gates Open," is still the same:

An earlier version of this article misstated the circumstances of Pope Francis’ remarks. He made them in a general audience at the Vatican, not in consoling a distraught boy whose dog had died. The article also misstated what Francis is known to have said. According to Vatican Radio, Francis said: “The Holy Scripture teaches us that the fulfillment of this wonderful design also affects everything around us,” which was interpreted to mean he believes animals go to heaven. Francis is not known to have said: “One day, we will see our animals again in the eternity of Christ. Paradise is open to all of God’s creatures.'’ (Those remarks were once made by Pope Paul VI to a distraught child, and were cited in a Corriere della Sera article that concluded Francis believes animals go to heaven.)

What does this whole game of telephone, pope-edition, prove? In my opinion, it shows how much the public trusts Francis, the People's Pope, the Cool Pope™, and his PR image. While some of the more "conservative" Catholics have been railing against the so-called Francis Machine, believing the public is being misled by the pope's flashes of progressiveness, I say it's a good thing people around the world, Catholics and non-Catholic alike, are attuned to what Francis has to say. The world is looking for a spiritual leader, and we have one in Francis.

Let's be careful about overstating Francis' comments in the future, but let's also not stop talking about them. Also, don't forget to tweet at him today: