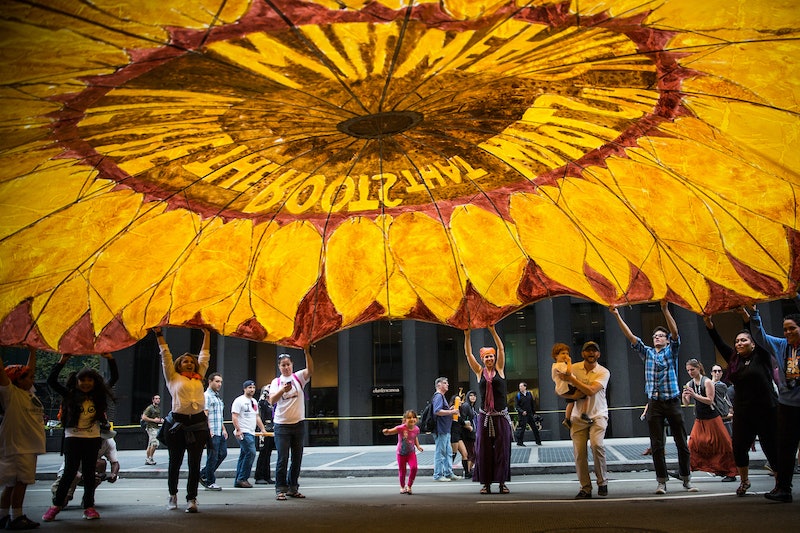 On early Sunday morning, world leaders from 196 nations reached a historic climate deal that requires every country to cut their greenhouse emissions, marking the first time that such a sweeping, international protocol has been established. Though plans were initially slated to be released on Friday, debates dragged on for two long nights as UN members continued to rehash a deal that, for most, still seems imperfect. But at the very least, it recognizes the collective responsibility of the world at large in addressing climate change, and represents a global step forward in the fight against global warming.

The deal comes after months of demonstrations across the world and appeals from celebrities like Leonardo DiCaprio to work together towards a global solution for a problem that affects every inhabitant of the Earth. And while the Manuel Pulgar-Vidal, the prime minister of the talk's host country Peru, recognized, "As a text it's not perfect," the agreement nonetheless represents a compromise amongst the entirety of the UN members. For the last two weeks, delegates from across the world have debated what conditions should be present in the agreement that is scheduled to be in adopted in Paris next year, but that proved to be a difficult task as the differences between developed and developing nations became a lightning rod for conflict.

Critics of the agreement have pointed out that the language, as a whole, suggests a united but significantly weakened commitment towards legitimate change. For one, the final draft said that pledge countries "may," rather than "shall," present quantifiable information about how their emissions targets will be met. Furthermore, the agreement does not address whether or not the measures are legally binding, nor is there a formal review process for the the commitments countries are meant to make.

Ultimately, the biggest problem with the agreement is that it simply will not achieve its purported goal of preventing the earth's temperature from rising 3.6 degrees Fahrenheit over the preindustrial average, which scientists say is needed to prevent, as the New York Times reports, "dangerous and irreversible effects, such as melting sea ice, rising sea levels, increased flooding and droughts, food and water shortages, and more extreme storms." In essence, it seems that much of the deal relies more on rhetoric than action, and is a symbolic gesture rather than a means for substantive change.

"The text went from weak to weaker to weakest and it's very weak indeed," as it went through four drafts, said Sam Smith, the chief of climate policy for the environmental group the World Wildlife Fund. Alden Meyer, the representative of the Union of Concerned Scientists, expressed similar concerns, saying, "I think it's definitely watered down from what we expected."

The chief complaint from many signatories is the idea of "common but differentiated responsibilities" between different nations based on the country's wealth. Led by leading polluter China, several countries balked at the idea of having every country bear equal responsibility in the fight against climate change, pointing out that richer, more developed nations like the United States have led the world in pollution for decades, and should pay the price.

Despite the fact that China has now overtaken the US as the country responsible for the most emissions and pollution, many believe that wealthier nations should be leading the charge in cutting their emissions first. When speaking to representatives from developed nations, Malaysia representative Gurdial Singh Nijar said, "Many of you colonized us so we started from very different points ... this you must appreciate. There is a world out there that is different from your world." Antonio Marcondes of Brazil agreed, saying, "We still live in a world of deep inequalities. Differentiation is not a reference belonging to the past."

The final agreement included a contentious "loss and damage" mechanism that requires developed nations to provide financial assistance their developing or less developed counterparts in regard to rising global temperatures. It also mandates that each country develop a detailed plan to limit greenhouse gasses from burning coal, oil and natural gas. Taken as a whole, these plans will be implemented in 2020 after being signed into agreement in Paris in 2015.

This new agreement takes the place of the then-landmark Kyoto Protocol of 1997, which excluded developing nations like China and India, now responsible for the vast majority of global pollution, from enacting any policy changes. Jennifer Morgan of the World Resources Institution said of the new UN deal, "This emerging agreement represents a new form of international cooperation that includes all countries. A global agreement in Paris is now within reach."

Despite dissatisfaction and persistent divides in the global community when it comes to how best to address the issue of global warming, the UN conference does demonstrate a willingness for some form of cooperation, and Xie Zhenhua, China’s vice minister of National Development and Reform Commission, noted, "The success of this has laid a good foundation for success of Paris. Next year all of us, all countries, will continue to demonstrate our ambition, flexibility and confidence."

For the sake of our world and our children's world, we can only hope that is the case.Images: Getty Images (4)