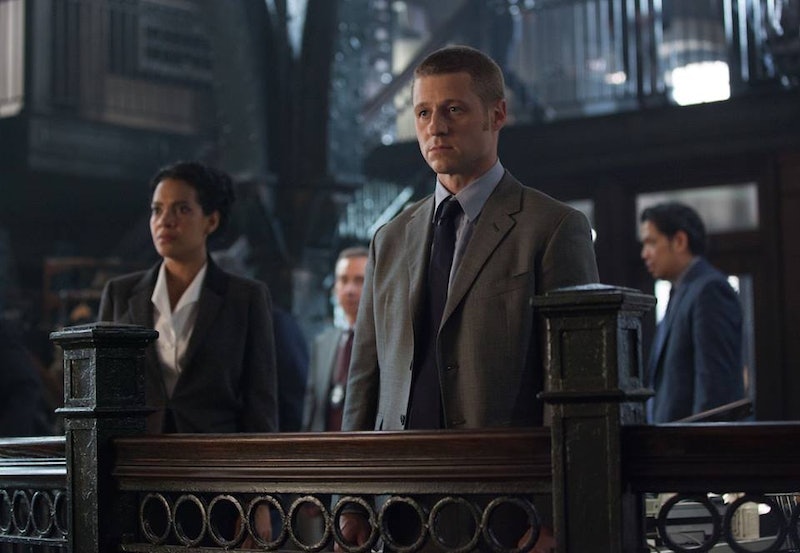 In its winter finale, Gotham made a bold move by kicking the future GCPD Commissioner out of the police force and demoting Jim Gordon to security guard at the newly opened Arkham Asylum. While Arkham doesn't have any famous villains imprisoned inside yet, there are plenty of comic book storylines that could be mined for future episode ideas by the Gotham writers. They haven't been shy about throwing the kitchen sink into these episodes, even though there's a good 20 years before Bruce Wayne gets into his Batman adventures. They've tried to split the difference between saving big moments for future seasons and introducing elements like Harvey Dent or the new Arkham so early.

It also indicates that there may be either a new character or an existing character who will end up inside Arkham where Jim will have special access to him/her that he wouldn't have as a detective. That's just a guess, but why else place Jim inside Arkham? There are a few clues to what will be happening during the second half of the season that showed up in the teaser in advance of the Jan. 5 return of the show.

There's Some Kind of Riot

The trailer ends with a big wave of prisoners racing out in what looks like a riot. Riots are often used as covers for villains like Joker to escape — he's a master of the diversion. So we might be witnessing Fish Mooney or Penguin pulling off an ambitious heist in order to escape from a temporary stint in Arkham.

We'll Be Meeting a New Character

We do know that they'll be introducing Homeland's Morena Baccarin as Dr. Leslie Thompkins, a therapist who's frequently featured in the comics as one of the young Bruce Wayne's earliest allies. Like Alfred, in some backstories she's a former colleague of Thomas and Martha Wayne, and may even have a mysterious past in government.

It Could Explore Arkham's Origins

Since Bruce Wayne is a kid at the moment, Gotham's greatest detective is probably Jim Gordon. And while he's been able to get rid of these villains of the week easily, uncovering the dark history of Arkham Asylum is a much bigger mystery. There's a famous comic written by Grant Morrison, called Arkham Asylum: A Serious House on a Serious Earth that followed Batman as he simultaneously traveled through Arkham combating villains like Killer Croc while delving through space and time to the origins of the Asylum, to the life of founder Amadeus Arkham, whose mother was tormented by visions of a mysterious bat.

Morrison's comic adopted a surreal, impressionistic tone that wouldn't really fit in Gotham's world, but they could use it for inspiration, maybe uncovering the secret passages that without fail the bad guys use to escape.

More like this
What Does Doctor Strange’s Third Eye Mean?
By Arya Roshanian
20 Photos From The 'Stranger Things' Season 4 Premiere To Make You Feel Old
By Alyssa Lapid
Marvel's 'She-Hulk' Trailer Is Finally Here & The Hulk Lends A Big Helping Hand
By Grace Wehniainen
Everything To Know About Marvel's 'Echo' Series On Disney+
By Grace Wehniainen
Get Even More From Bustle — Sign Up For The Newsletter