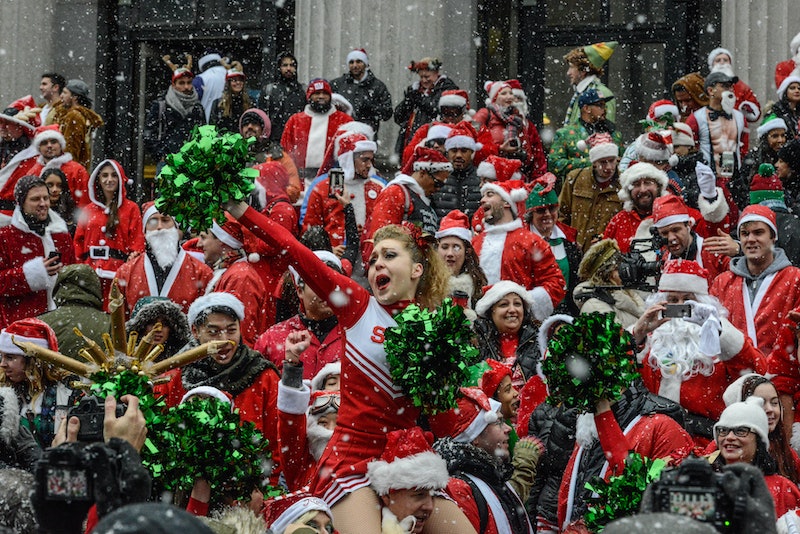 As someone who's never lived in a city where thousands of revelers dress up as Santa to participate in Santacon, until recently I assumed it was some sort of convention for people who liked to dress up as good old St. Nick for fun. Like a really weird, but ultimately harmless, Comic Con. Have I ever been more wrong about something in my life? Probably, but nothing is coming to mind at the moment. It turns out that rather than being a convention for jolly old retired men to dress up as Santa, Santacon is actually where legions of revelers in holiday garb descend on city centers, particularly Times Square, for good old-fashioned bar-hopping. Last year, the festivities got so out of hand that some Santas got into a drunken fistfight on camera, which of course ended up online under the title "Santapocalypse 2013."With that in mind, people were a little apprehensive about how all the Kris Kringles were going to behave this year, especially with people still protesting police shootings all over the country last night. According to the Washington Post, even Santacon organizers warned people not to get too crazy, tweeting regular reminders that fighting, public urination, and other such behaviors could get the celebration cancelled.So how did the hundreds of Santas acquit themselves this year? If you don't live in New York, we rounded up some photos to show you what you missed.

Starting off in Times Square.

You can't tell me some of these people aren't already drunk.

It's like a zombie movie, but starring harbingers of holiday cheer.

I like to imagine that a few tourists are huddled in the back of the bar, wondering if this is normal for America.

One St. Nick paused to take a selfie with "Millions March" protesters before going on his merry way.

Santa's sleigh must only work on Christmas Eve.

Anyone else feeling claustrophobic from that picture?

I'm not sure I even want to know what circumstances led to this.

Only after Santacon would you find a drunken elf passed out on your doorstep.

Overall, the consensus seems to be that, as some predicted, this year's Santacon was a little tamer than usual. We'll see if that holds up as the day goes on — it's about time for everyone to start waking up hungover and posting ridiculous photos from last night. Here's hoping Santa stays off the naughty list.