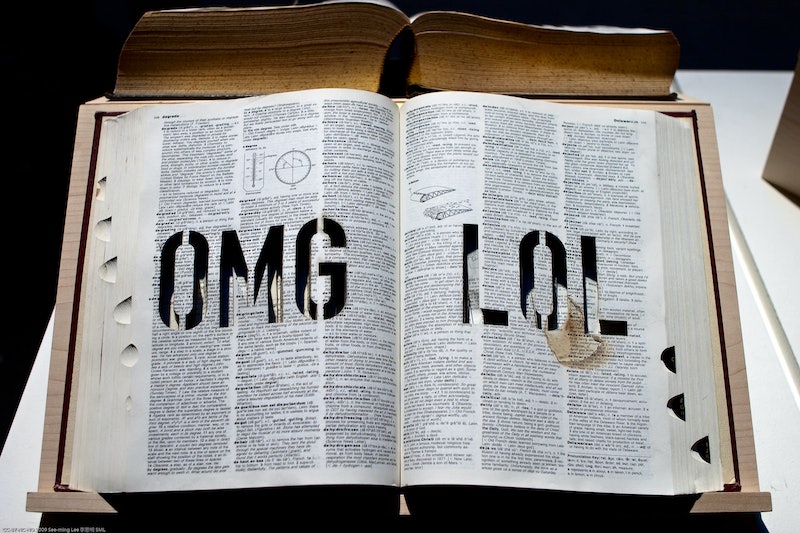 There's no better way for me to put my sociology degree to good use than to study a cultural year in review. From trending hashtags on Twitter to the best sex scenes of 2014, year reviews are a pretty great peek into the cultural zeitgeist. And because language is constantly changing (and this year is no exception), I gathered up 16 of this year's most popular and influential terms, and yes, I used them in a sentence.

Because whether you were basic or making fun of basics, throwing side-eye or getting turnt, binge-watching Netflix or consciously uncoupling from your significant other (sorry, if that's the case), these were the words that defined the last 12 months for many of us, and regardless of whether or not they're on fleek, they're probably here to stay. So we might as well embrace them.

Now, not all of these terms were invented in 2014, but they were definitely prominent in our conversations. For instance, serial has been a word in our vocabulary arsenal for basically forever, but Serial is only recently a thing to shamelessly obsess over. So go memorize the spelling and definition of each of these terms, because there's a vocab quiz on Monday.

Basic (adj.): Urban Dictionary defines basic as "an adjective used to describe anything involving obscenely obvious behavior." It's commonly used as a white-girl-on-white-girl insult as explained by NY Mag.

Beth is so basic that when she's not in yoga pants, she's dressed as a pumpkin spice latte.

Bae (n.): A term of endearment for one’s romantic partner

My bae and I will be together forever!!

Binge-watch (v.): A way to consume your favorite TV show in one sitting, usually by watching it online; A way to waste your entire weekend.

This weekend I'm going to binge-watch the entire first seven seasons of 'Grey's Anatomy,' because there's nothing else good on Netflix.

Conscious uncoupling (n.): Oxford elegantly defined this term as "an approach to ending a relationship which emphasizes acceptance of mutual responsibility." Made famous by Gwyneth Paltrow, aka Goop.

Clickbait (n.): Usually used when referring to the headline of Internet content whose main purpose is to get clicked on.

That's what clickbait means, and you'll never believe what gets defined next.

Fleek (adj.): On point, perfect, you nailed it.

Your eyebrows are on fleek.

Ice Bucket Challenge (n.): A video in which a person dumps ice water on their head and uploads the video to a social media platform, and then challenges a friend to do the same or donate to charity. A term used to refer to doing something good for a cause.

Normcore (n.): A fashion movement in which a person wears ordinary clothing.

Oh my god, did you see his classic sweatshirt? My dad is so normcore.

Polar vortex (n.): A term describing a system of winds that circles one of the Earth’s poles, but really a phrase used when referring to obscenely cold temperatures.

Get me the hell out of NYC and this polar vortex.

Side-eye (n.): To show one's distaste by peeking at someone from the very corner of one's eye. People have been throwing side-eye for years, but 2014 was the year OxfordDictionaries.com decided to make this a "real word" once and for all.

Shelfie (n.): A photo (usually on Instagram) of your book shelf.

Becky, look at her shelfie.

Shoefie (n.): A photo (usually on Instagram) of your shoe.

Becky, look at her shoefie.

Serial (n.): The incredibly popular true crime podcast hosted by Sarah Koenig. Obviously this has always been a word, but no one cared about it until now.

OK, but did you listen to this week's Serial?

Turn down for what: A question asked by teenagers or cool folks referring to being reckless as teens and cool folk do.

Turn down for what?

Turnt (adj.): A phrase used to show you are very excited or eager. (I think? Personally, I understand very little about hip vernacular.)

Dude, are you turnt for tonight's party?

Vape (v.): Vape is not a new word, but Oxford did name it word of the year, meaning "to inhale and exhale the vapor produced by an electronic cigarette or similar device."

Yo man, vape is word of the year!