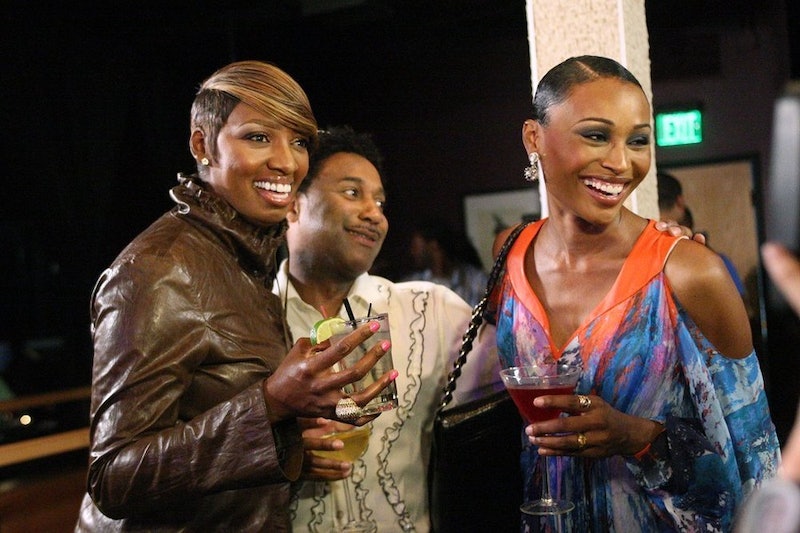 After Kandi organized that disastrous dinner at the end of the last Real Housewives of Atlanta , it seemed like there was more discord than ever between the ladies, and almost no one was getting along. But Nene and Cynthia actually made up within seconds of this week's episode. It was enough to give you whiplash. After Nene swore just minutes earlier that they'd never be able to make up, never be friends, now they're hugging and crying because they've missed one another so much? You know what, it would be much more interesting to see how Nene and Cynthia reckon with the whole Porsha/Kenya quadrangle when they're getting along, so I'm wasn't opposed to it, but it really came out of nowhere. And I'm not convinced it's going to last, even though the ladies seemed excited about it.

Cynthia, all of a sudden, seemed radiant again. He hair looked way better, her face wasn't all slick and shiny anymore, and when telling Peter about making up, she had a giddy look on her face, like a sixth grader talking about her first boyfriend. Of course, as the target of Nene's wrath last season, Peter called Cynthia out for being so hopeful and forgiving right off the bat. And while I never want to side with Peter about anything ever, it's not like they had actually talked through any of their issues. And even while the episode was airing, Peter was talking smack about Nene online, so we know that there's no lost love between those two.

Onscreen, Nene was talking about how it was going to be such a struggle for her to go backwards and make up with Cynthia. And later on in the episode, Nene didn't even show up to support Cynthia at her fashion show (where she killed it, of course).

Cynthia didn't even seem disappointed that Nene didn't make it. This timeline does not make a lot of sense. Just a few days ago, Cynthia was slamming Nene for comments she made about Ike and Tina Turner, swearing up and down that they haven't really talked since the reunion fight… totally neglecting this dinner resolution? And when Kenya appeared in New York, she didn't have anything to say about Nene either. So Nene and Cynthia are definitely not besties again just yet. I guess it's just another case of Bravo editing trying to create story lines that might not necessarily be true.

More like this
What’s New On Netflix: 'Stranger Things' & 'Somebody Feed Phil' Return
By Arya Roshanian
What’s New On Netflix: A Victoria Justice Rom-Com & The Return Of David Letterman
By Arya Roshanian
Kourtney Kardashian & Travis Barker Are Married – Officially
By Sophie McEvoy
Becca Tilley Confirmed Her & Hayley Kiyoko’s 4-Year Romance With A Heartfelt Note
By Brad Witter
Get Even More From Bustle — Sign Up For The Newsletter