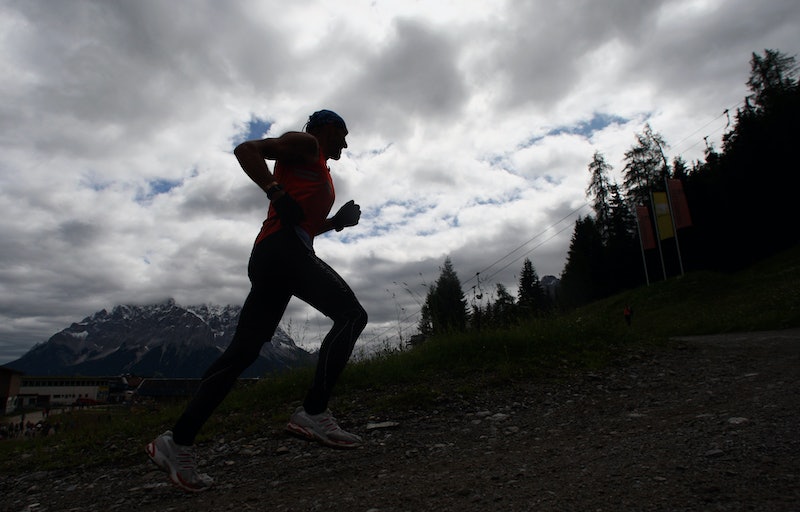 Marathon runners know what they're doing. On a cold day, they're still wearing a tank top and shorts because the sheer speed and power at which they are performing warms them up, just fine. But most of us do not, uhh, execute our runs with such vigor.

We're not purchasing a new pair of running shoes each month or pounding a spoonful of peanut butter on odd miles (OK, not a totally scientific description of a marathoner, but you get the idea).

But it doesn't matter if you're planning to undertake a 26.2 in the near future — or ever; the time and effort required to prep for a marathon means the people who do it have survival secrets up their sleeves that any type of runner can benefit from. So, if you want to step it up and start breaking your own records, take your cues from career runners.

Let's face it — listening to music like a true running enthusiast and stealing snack ideas will empower your body and mind to think of yourself as a real runner, not just some girl who jogs occasionally.

Here's a primer on how to start running like a pro.

If you're running long distances, you need to fuel up not only before your run, but during. Marathoners pack portable sports drinks and snacks to refuel during the race. Before hitting the trails (or the treadmill), go for an apple or banana with two tablespoons of peanut or almond butter.

The combination of carbs and protein keeps you going without weighing you down. For runs longer than an hour, pack an even lighter, easy-to-transport snack that's high on electrolytes and carbs. Think dried fruit, an energy gel, or even a sports drink like Gatorade or Powerade. The goal is to avoid running on empty, and seriously harming your body — not to mention your race time.

Have the Right Outfit

It sounds silly and superficial, but 20 miles into a run, the last thing you would want to deal with is an ill-fitting sports bra or shoes that hurt your insoles. If you're engaging in any sort of long-ish strenuous physical activity, even just a few times each week, appropriate accoutrements are an investment worth making.

Looking and feeling the part makes you more comfortable among your peers which makes you perform better and gives you one less excuse NOT to hit the gym. Who knows? The thought of wearing your sweet new gear might just make you want to move up your next run.

Doing the same type of exercise all the time — running, swimming, rowing — means repetitive stress on the same parts of your body. So, your calves and quads might be getting super-strong, while your arms and abs lack any muscle tone. This puts you at a much higher risk for injury than varying your activities so your whole body is gaining strength and stamina, rather than just a few parts.

To keep muscles limber and loose between runs, many marathoners turn to yoga. It has whole body toning benefits, can both help prevent and treat sports injuries, and builds an inner focus that can help you run that little bit further on your next dash.

It doesn't matter if it's 3:06 or 6:03, having a goal is a major element in keeping marathoners motivated at the (metaphorical, of course) 11th hour. Setting your own goals, both long- and short-term, can get you back on the track when nothing else can. A long-term goal might be, "I want to run a half-marathon in six months." A short term goal might be, "I want to run 200 meters further than I did yesterday," or even, "I want to MAKE it to the gym today."

It's not about beating yourself up if you don't get all the way there; it's about giving yourself one more reason to try.

Have a Killer Playlist

When your legs have turned to jelly at mile 24, it can feel like a few stumbles and a Hail Mary are the only things that'll get you to the finish line. But, when you hear "Bang Bang," all of a sudden, you feel like you're on top of the world. Make a playlist of high-energy, feel-good tunes for your runs, and try to keep them sacred. Associating them with a workout will make the mood lift that much stronger. Apps like Cruise Control and Tempo Magic even let you adjust the tempo of a song, so you can match it to your pace. If you're not feeling especially mix-mastery, feel free to give my high-intensity interval training playlist a try.