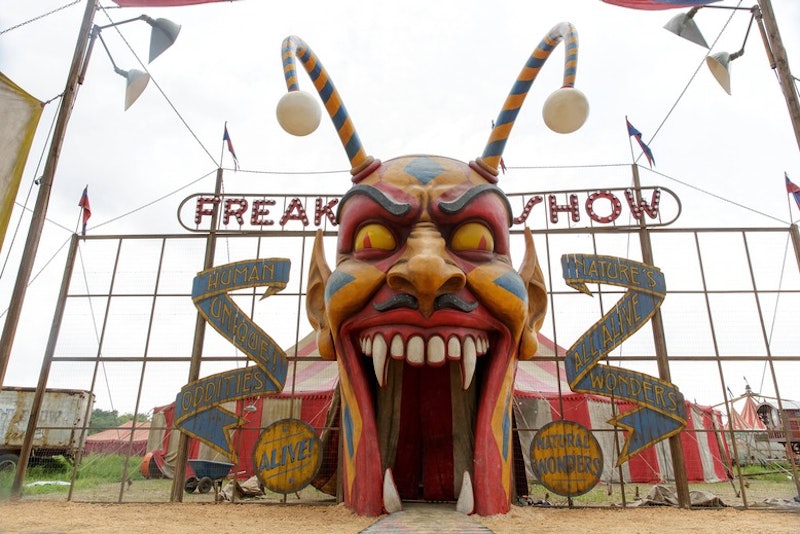 I’m a huge American Horror Story fan. I’ve spent a ridiculous amount of time obsessively debating every aspect of the show with my friends, and after every episode I look up fan theories online (especially the ones on Bustle, but you're not exactly surprised by that, are you?). I worship at the altar of Jessica Lange, and I’ve made my boyfriend look at a lot of pictures of Evan Peters while I wax on about how sexy he is. I get very weird about AHS.

Admittedly, I’ve felt a bit iffy about this season. I’ve been a little disappointed about the lack of action in the show, and I’d like to see great actors like Angela Basset and Denis O’Hare have a little more to do. But I’ve also fallen insanely in love with Dandy the psychopath, so there have definitely been some high points.

Despite my complaints, the freak show concept is really cool, and has made me way more into freak shows and circuses then I was before this season started. So, being both an avid AHS fan and a voracious reader, I decided that the only logical thing to do was to find as many books as possible about freak shows. Believe it or not, there's a lot out there. Whether you're a Freak Show super-fan or skeptic, these books are a great companion to this season of AHS:

If you’re a fan of YA, freak shows, and vampires, this is the series for you. A young boy gets more than he bargains for when he steals a spider from a traveling freak show. Moral of the story? Don’t steal giant spiders to keep as pets. First, it’s weird, and second, you’ll probably end up getting turned into a vampire.

I would never in a million years join Elsa’s traveling show. But given the change to join the Night Circus? Sign me up. This gorgeous tale of star-crossed illusionists is a couple of steps up from Elsa’s crumbling freak show, but still has all of the magic, quirky characters, and danger of AHS.

IT by Stephen King

Move over, Twisty. Pennywise was making clowns terrifying way before it was cool. And this guy doesn’t have any kind of sob story to explain why he kills: he does it because he likes the taste of children’s fears. Apparently fear makes children tender, who knew? Oh yeah, he’s also some kind of crazy metaphysical god thing at war with a cosmic turtle. Even Ryan Murphy couldn’t make this up.

Water for Elephants by Sara Gruen

Forbidden love! Circuses! Elephants! For those of you who like a little romance in your circus novel, Water for Elephants is the perfect post-AHS read. Plus, Robert Pattinson was in the movie version, so enjoy picturing him throughout the whole book.

What do you do when you can’t get freaks for your freak show? You make them, of course. When business gets bad for a couple of owners of a traveling show, they use drugs and radioactive materials to turn their kids into freaks. One turns into a cult leaders who encourages his followers to disfigure themselves, while another must try to stop her daughter from having her own special “freak” body part removed. Now that sounds right up Ryan Murphy’s ally.

Let’s take a break from fiction for a second and look at the real history of freak shows. Bogdan examines the freak show culture of turn-of-the-century America, looking at how the freaks themselves played an active role in their own careers. He focuses on freak shows from a social perspective, and gives a lot of cool facts about famous freak show performers. Definitely a cool read for those interested in a “behind the scenes” perspective.

Horrific Sufferings of the Mind-Reading Monster Hercules Barefoot: His Wonderful Love and His Terrible Hatred by Carl-Johan Vallgren

The mute, telepathic Hercules goes from a bordello to an asylum to a monastery, only to end of in a traveling freak show. This one is a little grittier than the others, perfect for those who like AHS’s darker and nastier side.

The Carnivorous Carnival by Lemony Snicket

I’m not the only one who was completely obsessed with A Series of Unfortunate Events , right? So take your love of the Baudelaire orphans, your love of AHS, and mash them together to get The Carnivorous Carnival. The Baudelaires must disguise themselves as freaks in a carnival to escape the clutches of the dastardly Count Olaf and try to gather information on their potentially living parent.

Maybe this is a little more X-MEN than AHS, but I’m still counting it. A young boy stumbles across a 1940’s orphanage that houses a bunch of kids with some pretty incredible gifts. So they might not be freaks, per se, but it’s still a story about the weird and unusual.

Something Wicked This Way Comes by Ray Bradbury

Sure, Freak Show has a tattooed man, but does he tattoo the faces of his victims on his hands? Ray Bradbury’s classic about a killer carnival is equal parts terrifying, whimsical, and even has a healthy splash of love-conquers-all. Which is cool, if you’re into that sort of thing. I’m not, so I would prefer to focus on the age-manipulating carousel, the creepy Dust Witch, and the Illustrated Man who turns anyone who gets in his way into circus freaks.

Half Life by Shelley Jackson

We all agree that there just wasn’t enough of Sarah Paulson in Freak Show, right? I mean, for having two heads, you would have thought she’d see a little more action. So think of Half Life as Bette and Dot’s spin-off novel. Nora and Blanche are conjoined twins, the latter of whom has been asleep for 20 years. Nora goes on a quest to rid herself of her sleeping sister (sound familiar?).

More like this
16 Novels That Paint A Realistic Portrait Of Abortion
By K.W. Colyard
'Bridgerton' Star Nicola Coughlan Confirms Season 3 Will Focus On Colin & Penelope
By Grace Wehniainen and Alyssa Lapid
The Time Traveler’s Wife Book Has A Heartbreaking Ending
By K.W. Colyard
The Monster In 'The Essex Serpent' Was Inspired By A Real Local Legend
By Sophie McEvoy
Get Even More From Bustle — Sign Up For The Newsletter