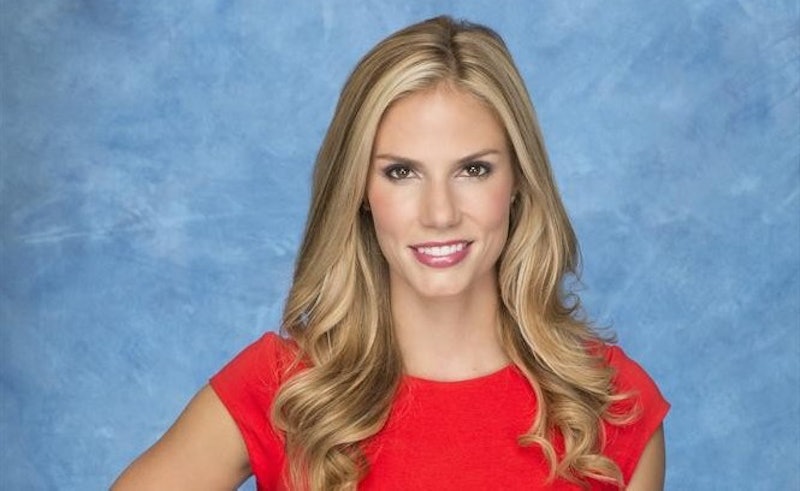 Christmas came early this year with the release of Chris Soules' 2014 Bachelor contestant bios. As a bonus we were given 30 girls to read up on and get to know before the January 5 premiere of The Bachelor. Reegan Cornwell is basically the new Pantsapreneur, winning the nonexistent award for the best job title: Reegan a "Cadaver Tissue Saleswoman." In my mind I literally imagine a girl going door-to-door with a dead body, and while I’d like to think that’s was Reegan is doing, I know that it’s probably a lot more complicated than that, but bravo on a creative job title, girl. Maybe when I am finally cast on The Bachelor my title could be cool too like "Internet Stalking Expert" or "Television Knowledge Guru."

But let's talk about Ms. Cornwell for a moment, shall we? Besides being a Cadaver Tissue Saleswoman in Manhattan Beach, CA, she loves eye makeup remover, salted caramel ice cream, cherry chapstick, buttered popcorn, and obviously mascara (you wouldn’t need remover without mascara). I'm not saying Reegan isn't interesting, but I am saying that the least generic thing about her is her job, so that's not a great start — then again, do these ABC bios ever do women justice?

The rest of her bio pins Reegan as being a traditionalist when it comes to dating. Considering how old fashioned Chris proved to be during Andi's season, he’d probably dig a girl who wanted the car door opened for her.

According to Reegan’s LinkedIn profile, she works for a company called MTF (Musculoskeletal Transplant Foundation). They are a non-profit tissue bank and their main job is “connecting donors with surgeons and transplant recipients.” The company, which was founded in 1987, has received tissue from over 90,000 donors and 5 million grafts to be transplanted.

Thanks to LinkedIn, we get a pretty clear idea of what Reegan does for MTF, where she has been working for almost two years. As a saleswoman she builds relationships with doctors and hospitals and families (mainly ones who would need tissue for reconstruction). As she mainly works with sports tissue sales, so we can assume that many athletes have benefited from her saleswoman techniques. She writes that she is “responsible for over $2,000,000 dollars in sports cadaver tissue sales, new technology and biologics.” I can only assume that $2 million is probably a large number in her world, otherwise she wouldn’t be advertising it.

She also posted on her page that she was the number one in company growth for 2013 winning the President’s Gold Cup Winner. For a job that sounds pretty morbid, Reegan is making it sound pretty kick-ass.

So, Who's Buying Cadaver Tissue?

In a nutshell, people need cadaver tissue for ligament reconstruction, knee replacements, foot and ankle surgeries and probably many other complicated procedures that I don’t understand because I write about celebrity drama all day. So, Reegan's job is to match and sell cadaver tissue to doctors and hospitals so that surgeons don’t have to do all the work themselves and can solely focus on their patients.

Like I said, coolest job title of the season.

UPDATE: MTF has denied that Reegan works for them and she has taken down her LinkedIn page. According to an MTF representative Cornwell is an employee of ConMed and her actual title is Surgical Consultant, Sports Tissue & Biologics. The Bachelor has since changed her profession title to "Donated Tissue Specialist" as the latter title was considered disrespectful in regards to organ donation.