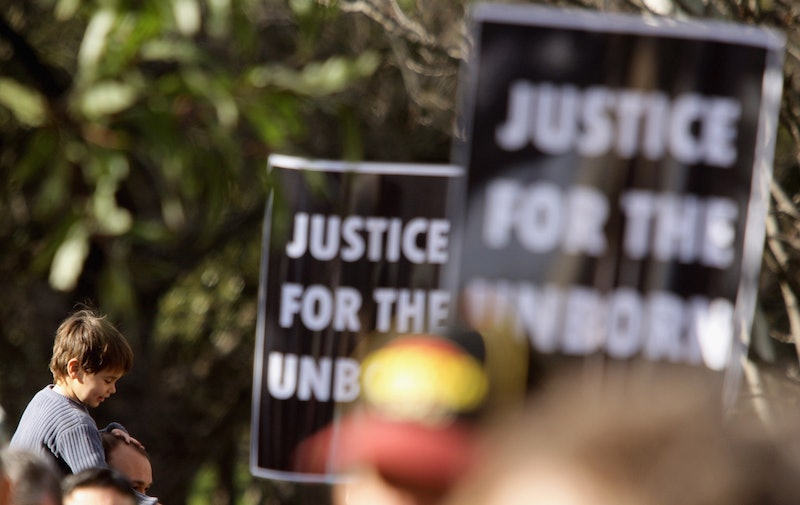 In the last year or so, pro-life politicians have shifted their focus from outlawing abortion entirely to only outlawing it after 20 weeks. Of course, the internal logic of this argument is questionable — if life begins at conception, isn’t the age of the fetus after conception irrelevant? Pro-lifers respond to this by pointing to the subject of fetal pain. Fetuses in the womb, they claim, can feel pain at around 20 weeks, and so if we’re not going to save all of the unborn, we can at least spare them some of the physical pain caused by the abortion procedure.

Well, waddya know: It turns out that much of the medical evidence supporting the notion of fetal pain comes from doctors who don’t, in fact, believe in fetal pain.

“Fetal Pain: The Evidence” a document posted two years ago by the National Right To Life Committee, is a sort of one-stop shop for anti-abortion activists looking for evidence that fetuses feel pain. It purports to be a compilation of the mountains of medical evidence that fetuses feel pain, and yet when the New York Times reached out to several experts whose work was quoted in the document, many said that their work was irrelevant to the subject of fetal pain and, in some cases, that they flatly don’t believe fetal pain exists.

An example: Dr. Nicholas Fisk is the former president of the International Fetal Medicine and Surgery Society. He’s has studied the release of stress hormones in fetuses during invasive procedures, and amongst his conclusions is that these stress responses “are independent of maternal responses.” The pro-life report cites Fisk and his work 27 times as proof that fetuses feel pain before 20 weeks.

Yet Fisk, when confronted directly on the subject of fetal pain, said that it’s “not possible at all” for fetuses to feel pain before 24 weeks.

The report also cites Dr. Mark Rosen, who pioneered the use of anesthesia in fetal surgery. That’s pretty clear-cut, right? Well, no. The purpose of anesthetizing fetuses during surgery, according to Rosen, is that “it promotes healing” after the surgery. Rosen says that if fetuses could feel pain during surgery, the anesthesia from the mother would be more enough to eliminate it, and it would thus be unnecessary to anesthetize the fetus separately.

The report is full of misappropriated citations like this. One Swedish neuroscientist who was quoted 12 times had no idea his work was being used to push a pro-life agenda, and said that his research, which involved studying the facial responsiveness of fetuses with brain defects, “did not deal with pain specifically” and only had “marginal bearing” on the topic of fetal pain.

There is one expert quoted in the report who does believe in the possibility of fetal pain before 20 weeks. But the expert in question, Dr. Sunny Anand, thinks the best way around this is to inject the fetuses with heart-stopping medication prior to the abortion. Not, as the pro-life movement insists, to prevent women from getting abortions to begin with.