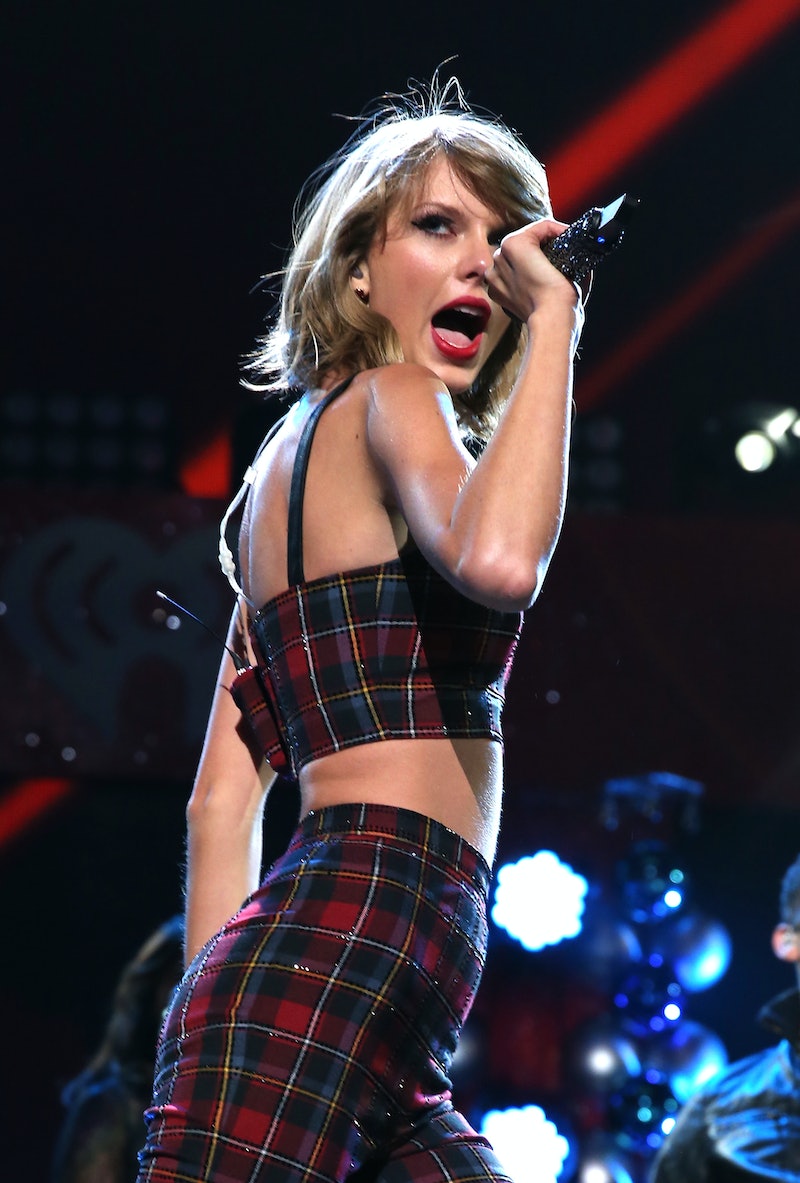 Ah, to be Taylor right now. Taylor Swift's 25th birthday party was pretty much the talk of the town this weekend. Pretty much the entire music elite was there — Justin Timberlake could be spotted wearing a poop emoji mask, current chart-topper "Stay With Me"/"I'm Not the Only One" crooner Sam Smith was in attendance, and even the oft-acknowledge queen and king of music, Beyoncé and Jay-Z made an appearance.

Add that to the fact that Swift got what might just be the cutest present ever from BFF Lena Dunham (a custom cameo necklace created by famous jewelry designer Irene Neuwirth, featuring a tiny painted portrait of Taylor's infamously adorable Scottish Fold, Meredith Grey), and you've got quite the birthday weekend. Oh, and I think you can guess the other cherry on top of the sundae — Taylor's super enviable birthday girl style.

As she was performing in Z100's Jingle Ball and appearing at Billboard's Women in Music Luncheon on the same day as her birthday bash, she wore quite the melange of outfits this weekend: From ultra-classy/classic Oscar de la Renta to No Doubt-era Gwen Stefani-approved plaid separates, Swift wore it all with aplomb. Let's take a look at her fashion triumphs!

See? Very Gwen Stefani, eh? '90s grunge with a 2014-twist. It's definitely out there on the stylishness spectrum, but count me in as a fan.

Now, this one's got a '90s look to it too, but maybe not in the best way. Props for (almost) wearing Pantone's color of the year, though.

Everyone should wear Oscar de la Renta, always. This confection of a dress is so gorgeous that I'm getting shades of Grace Kelly in Rear Window!

More like this
The Very Best Quotes From Dr. Taylor Swift’s NYU Graduation Speech
By Grace Wehniainen
This Is How Taylor Swift Feels About Joe Alwyn’s Steamy New Series
By Alyssa Lapid
Doja Cat Wore Surrealist-Inspired Schiaparelli To The BBMAs
By Dominique Norman
Joe Alwyn Reacts To Taylor Swift Earning An NYU Doctorate In A Rare Interview
By Jake Viswanath and Nicole Pomarico
Get Even More From Bustle — Sign Up For The Newsletter