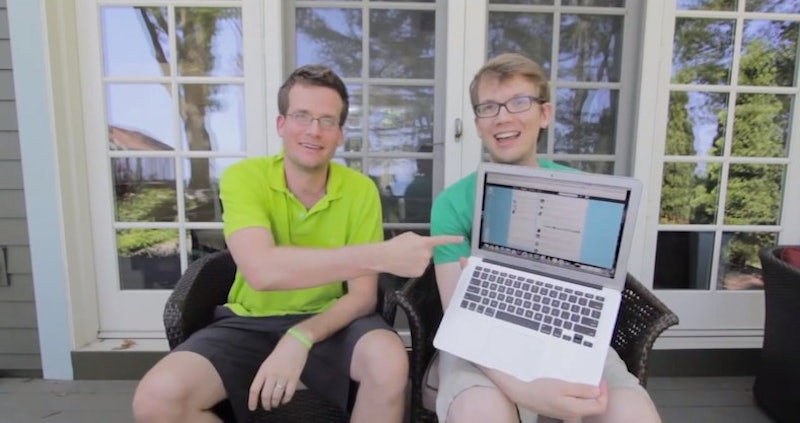 We're not exaggerating when we say we've spent many hours of our life wondering how John Green and Hank Green do as much as they do. Between the two of them, they've got highly successful vlogs, best-selling novels, two educational channels, an Emmy-winning web series, and 2D glasses — and we're not even mentioning everything there is. Then, on Thursday, John Green tweeted about an upcoming project that they're announcing next week. More?!

Hank and John Green's Vlogbrother's channel literally boasts a motto constantly reminding the brothers (and their followers) to be awesome — and their track record has been in keeping with that — so any new enterprise is usually a solid one. John seems pretty psyched about it, too: He tweeted that the announcement of the new project will come sometime around Monday or Tuesday, then followed up with a second tweet expressing his desire to tell us immediately.

Unfortunately, we're gonna have to wait. But we can't help but spend the time between now and the announcement in anticipation. John's twitter assured us that we'd "never guess who created it or who's producing it. NEVER," so that did nothing to curb our curiosity. Thanks, John.

To tide us over, let's look at a few of the Vlogbrother's past projects. Maybe these will provide us some clues as to what's coming next:

It's the Green brothers, and they're so busy that I'm absolutely positive we've left some of their endeavors off that list.

So what's this new project? Who are they teaming with? It could be anything, with anyone. Vlogging legend Ze Frank? Geeky superstar Felicia Day? Neil Gaiman? JK Rowling? The Queen of England?

We have no clue. But we can't wait to find out.