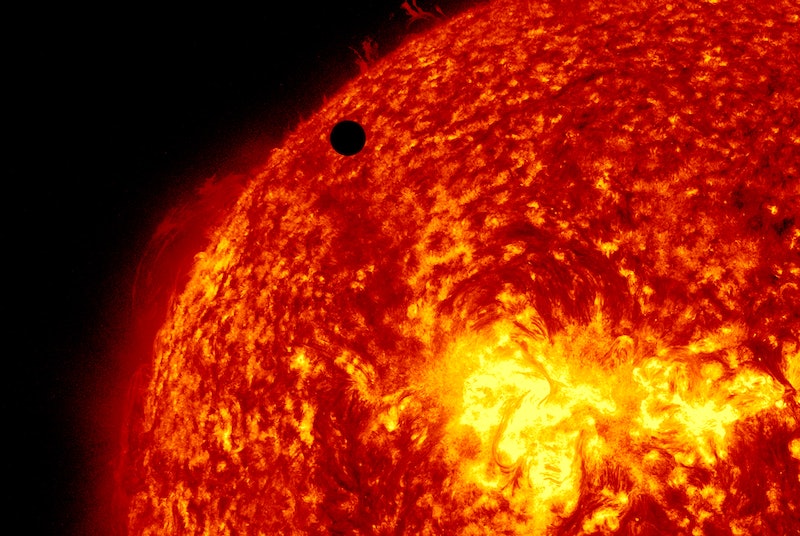 Fun little story about me: I nearly failed high school chemistry. I guess that's less of a "fun story" and more of a "shameful admission," but tomayto/tomahto. I was always a good student, partially because my parents gave me their super smart genes, and partially because I'm hyper-competitive and always want to be the best at everything. But mixing one thing with another thing to create a third thing (or whatever it was we did in chemistry) was just not my bag. Alas, I gave up my dream of becoming a scientist (ha!) to pursue a lucrative (HA!) career as a writer (sorry, Mom). Basically what I'm trying to say is that I know diddly-squat about science, but someone much smarter than I am took it upon themselves to answer the question: Could the sun be extinguished by a bucket of water just as big as itself? Yeah, we humans have been chilling on this earth, totally confused about how and why the universe exists, for just long enough to really start getting down to the important questions.

The answer is filled with equations and formulas that are wholly disorienting to my puny brain, but the author does attempt to break it down so that us regular people can understand. From what I've gathered, the short answer is, "No, the sun cannot be extinguished by a sun-sized bucket of water"—but maybe it can be melted. Or would be able to magically convert the water into energy and burn even brighter. Or something about plasma and vacuums? Damn, this stuff makes Interstellar seem manageable.

Sun's overall density is 1.4 times that of water. So if you have a bucket of water equal to the volume of the Sun, that water will have 1/1.4 = 0.71 times the mass of the sun, or 0.71 solar masses. After you pour that water (which is basically hydrogen and oxygen) onto the sun, you end up with a 1.71 solar mass star with a composition of 48 percent hydrogen, 37 percent oxygen, and 14 percent helium (with 1 percent heavier elements).

Now, will such a star burn? Yes, but not with the type of proton-proton fusion the sun uses. A star 1.7 times the mass of the sun will heat up and burn almost entirely by the carbon-nitrogen-oxygen (CNO) fusion cycle. So with CNO fusion and that mass you end up with a type F0 star with about 1.3 times the radius and 6 times the luminosity of the present Sun, and a temperature somewhat hotter than the Sun (7200 K vs. the Sun's 5800 K). It will be bluish-white, with more UV. That, along with that 6 times heat input, will fry the Earth's biosphere and probably cause the oceans to boil.

You can read the rest at Gizmodo , and you should, because it's a weirdly captivating thing to consider.

The one thing that was not addressed in the article, however, was the only thing I could think of while reading it: Where are we going to get a bucket that big, and how are we going to hurl it at the sun? That sounds like a team-building exercise for the ages.