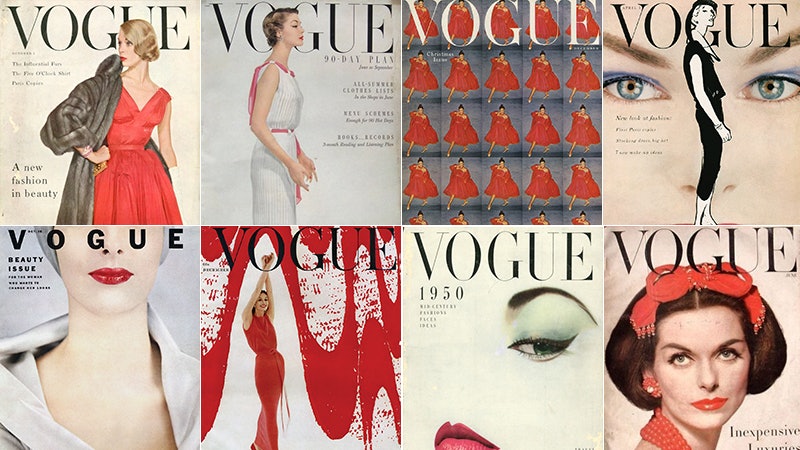 It's no huge secret that the 1950s weren't exactly the most forward-thinking time when it came to women and women's roles. It was the decade of post-war, booming suburbs, car culture, and the "perfect" housewife. The world's view of women had a long way to go in the '50s — in some cases, it still does — but overall, much has changed for women in the past 60 years. One thing that's stayed a constant? Well, Vogue, of course.

In case you didn't know, V ogue has been around since 1892 — yup, *that* long ago. So what was Vogue like in the '50s, you ask? Well, it focused a lot on fabrics, and included things that you wouldn't see in current issues; for example, most issues of Vogue in the '50s listed popular boarding and preparatory schools. You know, for all your child-rearing needs. One thing that has stayed consistent in Vogue, though, as well as any other long-existing magazine, is ads. Advertisements are what fuel the majority of magazine revenue. And in case you find yourself thinking, "Gosh, there's more ads in every issue" as you flip through a magazine today, rest assured, ads — and lots of ads at that — have been around forever.

Of course, the ad content has changed quite a bit in the past decades. While fashion has been a constant, the idea of the possibility of reaching perfection for an American housewife and Vogue reader is seen again and again in '50s Vogue ads. You can see what I mean in these examples. Prepare to cringe a little. (P.S.: Click on the image to zoom in even more on the casual sexism!)

This advertisement equates wearing a luxurious sweater with feeling like you've just married a millionaire. Not becoming a millionaire yourself — how unthinkable. Just marrying one.

2. "How to Bring Your Husband Straight Home at Night..."

This ad (seen on the left) is made to look like an editorial piece, and describes how it is your job to bring your husband home at night. How will you do this? Well, face cream, of course! An excerpt from the ad:

"Look in your morning mirror. See the memory your husband carries with him day after day. Is it a magnet alluring enough to draw him right home night after night? It can be...It's easy...so very easy...to make him want to come straight home to you night after night. It's so easy to avoid that dreaded call, 'I won't be home tonight.'"

Another facial cleanser ad (beauty products were a majority of ads in many of Vogue's 1950s issues) describes how your "charm and beauty are what set you apart." God forbid a woman's intellect or success or personality set her apart from everyone else and made her special, am I right?

Many ads were aimed directly at women and their appeal to men. Instead of the "feel wonderful about yourself" message that tends to permeate commercials today (even if it feels a bit forced) ads focused on how men would view you were you to use, wear or buy XYZ product.

You'd think hair color preference is something that is completely defined by a woman and her individual, personal taste. Well, this oil shampoo ad says differently, starting out with the line, "Listen to a man describe a woman...almost invariably his first recollection is her haircolor."

And ads weren't the only thing from 1950s Vogue issues that were sometimes a little disconcerting. Editorial content often emphasized the same ideas...

This article is equal parts annoying and condescending. First of all, it says not every woman can be beautiful. And second of all, it's telling those of us ugly ducklings who don't make the beautiful list that, don't worry, we can be attractive in our own way...sort of...if we just act a certain way and sit up straight. Nice.

To be fair, the article does talk about having confidence and ignoring jealousy — all important things in any decade, but for some reason it's pretty difficult to even get past the title.