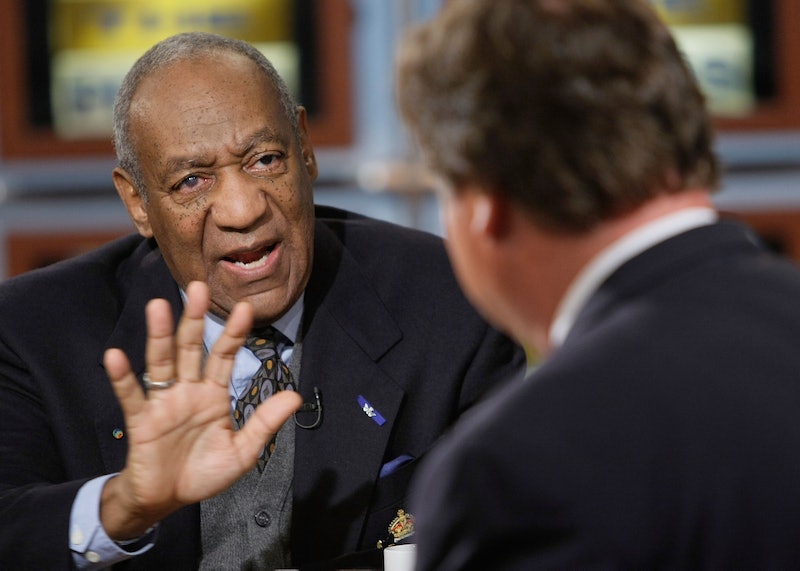 In a twist that should be less surprising than it was to me, it appears that Bill Cosby has found fault with the journalist he most recently broke his silence in an interview with. New York Post reporter Stacy Brown interviewed Cosby for an article that went up on Saturday, and, during the brief interview, Cosby was quoted as asking the black media to remain on his side throughout all the allegations of sexual abuse that are being brought up against him. According to a statement released by Cosby attorney John P. Schmitt, Brown misrepresented himself and his intentions to Cosby in order to obtain that quote.

"Mr. Brown did not indicate that he was interviewing Mr. Cosby for publication, did not say that he was reporting for the New York Post, and did not tell Mr. Cosby that the conversation was being recorded," said Schmitt in the statement. "In a discussion of journalistic standards, Mr. Brown failed to adhere to the most basic standards of his profession.... Mr. Brown identified himself as a freelance reporter for a number of African-American media outlets, which prompted Mr. Cosby’s comment regarding the African-American media."

In response, during an interview with USA Today, Brown agreed with Schmitt's statement, revealing, "I’m not going to argue with him or the statement. But the call was so brief. It was two minutes. It just wasn’t a thing where I could say at the end, 'Is this something you mind if I share?'"

The question of whether or not a journalistic standard has been breached seems unclear even from the onset. According to Schmitt's own statement, Cosby was aware that he was being interviewed by a freelance reporter who worked with "a number of African-American media outlets" — so it seems impossible that Cosby could thus be unaware that whatever he said during the two minute phone conversation would appear in publication. Neither Cosby nor Brown seem to have stated that anything would be off the record and, quite honestly, Schmitt's statement implies that Cosby is more upset that his words appeared in the New York Post than that they appeared anywhere at all.

According to Brown's website, he is in fact a freelance journalist who writes for numerous publications, of which the New York Post is only one. Thus, while he was reaching out to Cosby on behalf of the Post, it seems like quite a leap to say he was misrepresenting himself as an African-American freelancer — which he is. However, Cosby's lawyer and Brown are both in agreement that Cosby was not made fully aware that his words would appear in print after the brief conversation, and that seems definitive enough. In the meantime, Cosby's official statement on all of the sexual abuse allegations remains the one given through his lawyers: