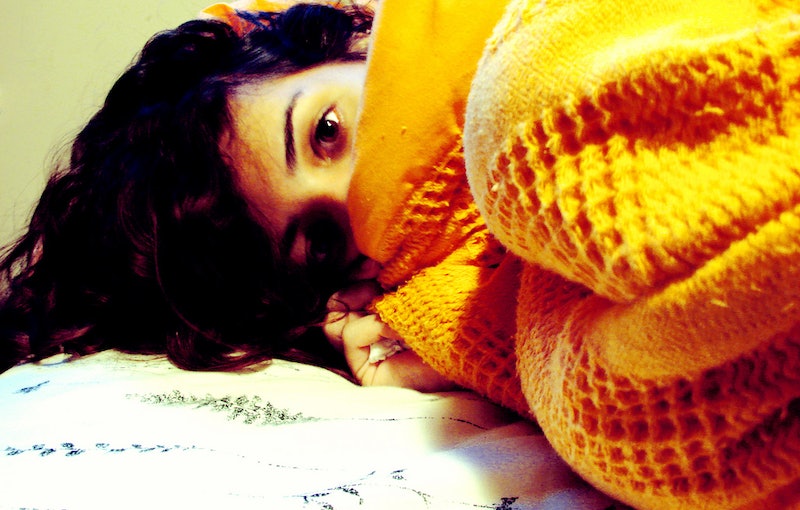 Several years ago, my roommate and I both were plagued with a head cold that lasted from October well into January. Of course, our mid-twenties lifestyle was in full swing at the time, so we weren't willing to say no to the parties, concerts, and late night binges on unhealthy snacks and Netflix that may have contributed to this ongoing illness. We lived off DayQuil during the day and then ended our evenings with NyQuil: The true American way to get rid of a cold.

Eventually, I called my mom, my childhood doctor, who suggested a regimen of 2000 mg of vitamin C every four hours, plus zinc tablets. Sure enough, my cold subsided and I was left wondering why I hadn't thought of turning to these products for relief in the first place. This completely changed my cold-abating strategy: When I start feeling sick, whether it feels like a head cold or a stomach bug, I reach first for natural cold remedies, and then for those trusty stand-by's that can be found in any pharmacy.

Some common OTC medicines temporarily relieve symptoms by masking the problem instead of curing it. Ever wonder why your commitment to an OTC remedy often leads to a teary phone call to your doctor begging for antibiotics days later? It's most likely because you haven't gotten to the root of the sickness. Obviously, I am not a doctor, but I am very much able to read the label "Temporarily relieves symptoms" not "Cures your cold." I've found that, for me, natural remedies work great in addition to OTC medicines (let's be honest, sometimes you need that NyQuil to get some real rest), and most of them won't work against each other.

(Don't get it twisted though, if my natural remedy isn't working then I'm definitely showing up at my doctor's office, tissues in hand, tear-stained face, and holding my childhood cabbage patch doll, Pam, for comfort. I am a shadow of an adult when I'm sick. Trust that.)

That being said, there are some things that can be alleviated with natural remedies much easier than others. If you have an auto-immune disease or any other long-term condition you should check with your doctor or conduct extensive research before you try alternative medicine, because some ingredients may work against your long-term treatment.

These natural remedies have worked for me when it comes to alleviating symptoms of the common cold, and if you pile up on those antioxidants and vitamin C? According to various sources, you increase your chances of kicking your cold faster and you don't need to be a doctor to know that.

Here's the deal: Numerous sources state that vitamin C should be taken every four hours throughout the day when you're sick, because the vitamin leaves our system in about three hours. When you start feeling sick, doses of 5000mg can be used to treat common colds. According to Life Extension's Fourth Edition, Disease Prevention and Treatment, placebo based studies have found substantial evidence that vitamin C can treat common colds. My deal is, as soon as I feel my glands getting swollen, I'm about that vitamin C life.

I'm talking about medicinal mushrooms, not the psychedelic ones. According to sources at Fox News, mushrooms have powerful healing properties that boost our immune systems, so making a nice brothy soup with shiitake or reishi mushrooms may very well be your ticket out of bed. Loaded with copper and iron, this fungi has been known to protect humans from free radicals that are harmful to our immune defense for centuries.

The ultimate stuffy nose remedy has been used for centuries because of the antiviral properties in ACV. Reader's Digest says this simple health tonic of apple cider vinegar and water is a great way to relieve congestion naturally. Not only is diluting apple cider vinegar with water a safe way to get rid of congestion, it relieves sore throats, and sinus infections, which makes this smelly beverage an ideal cold remedy. Some say the vinegar can boost your immune system as well as alleviate symptoms from the common cold.

Oof, nothing makes me retreat into a cocoon of misery like a stomach ache. Whether it's a stomach bug or a food or drink hangover, I am waddling into my kitchen and looking for some kind of relief. One trusty remedy I've used for over a decade is baking soda and soda water. I've learned that baking soda is an effective way to relieve a sour stomach. Ever tried alka-seltzer? It's made from sodium bicarbonate, which is basically baking soda. You don't need to run to your nearest pharmacy at the first rumble in your tummy. Try drinking baking soda and soda water if your stomach is feeling sour. Because of the high alkaline properties of baking soda, baking soda is a natural antacid.

Years ago, the day after Christmas came with a huge hangover. Typically, my hangovers are 99 percent emotional and one percent stomach ache, but Christmas of '09, I woke up with a dire need to vomit everywhere. Fortunately, I was visiting my parents and like a true spoiled brat, I texted my mother from my bed. "Help Me." My mom came in with a spoonful of sugar and cinnamon and literally within moments I felt like I could eat. It turns out, cinnamon can help with nausea. Cinnamon has been used as a traditional herbal medicine for centuries.

I've used oregano oil to treat a lengthy cold. According to sources like Livestrong, oregano can stop the growth of viruses and bacteria, which is way more than most of our OTC medicines claim to do. Studies have been done showing that oregano oil contains many phenols that can control and stop the growth of viruses, bacteria, fungi, and parasites. Since oregano contains vitamins A and C, zinc and other nutrients, it's no wonder that studies in the United States have found ingesting the oil to aid in fighting the common cold.

Turmeric has been used in Ayurvedic medicine and in traditional Indian medicine for centuries. I've used turmeric during allergy season and found some serious relief because it's a natural anti-inflammatory with antiseptic, antiviral, and anti-bacterial properties. According to sources like Livestrong and Health Central, diluting turmeric and warm milk has shown to be naturally effective at the onset of flu symptoms.