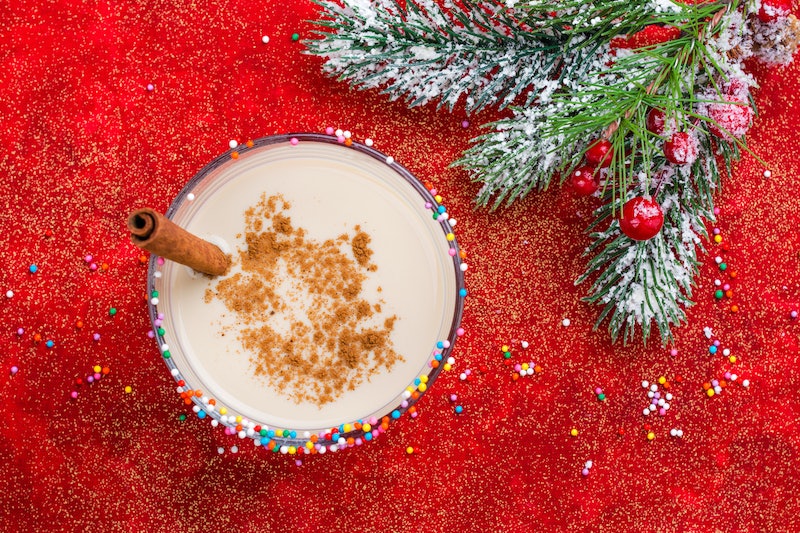 Whether you're its number one fan or its biggest detester, eggnog is taking over the supermarket shelves this time of year. There's nothing you can do about it. It's just the way things go. Eggnog is kind of like the candy corn of holiday foods — you either love it or you hate it. And while some of you may be gleefully stocking up on this creamy concoction, others may still need some convincing. It's OK, I was once one of you. In fact, it was just this year that I finally took off my "I hate eggnog" hat and made peace with the king beverage of the season. It was a process, and I'm not going to lie to you and say it was easy, but I'm now a believer in the magical holiday powers this beverage has to spread good cheer.

Eggnog has a very distinct taste to it, so it's no wonder people have very strong feelings about the beverage. And with it only being available on shelves during certain months of the year, its hype just gets that much more intensified. Here's the thing though, guys. With recipes that range from hot chocolate eggnog to eggnog French toast, you're going to want to get on the eggnog bandwagon, and fast. So let's talk about how you can do that. It's an emotional seven stages, but I have faith in you.

1. Feeling betrayed. Everything about eggnog sounds delicious, and then you have your first sip.

Milk, sugar, eggs, and nutmeg? Everything in that lineup sounds delicious. So why does the drink taste so far from it? You didn't start out a hater. Eggnog did you wrong, and now you have to turn your back on it. Not cool, eggnog, not cool.

2. All-consuming hate. You despise eggnog, and everyone needs to know it.

Now that you've tried eggnog, you not only know that you don't like it... you know that you hate it. That you'd rather have a PBR than drink the spiked eggnog at holiday parties. And you need everyone around you to hear about it. Eggnog sucks, and you will never, ever be a fan.

3. Despair and confusion. All of your friends are pounding this stuff down, and you can't even sniff the carton.

You're starting to worry that there may be something wrong with you and not the eggnog. After all, no one else on the entire planet seems to have the same disdain for this holiday beverage that you do. Maybe you just had a bad batch that first time?

4. Hesitance and reluctance. You're still scarred from the last time you tried eggnog, but you cautiously decide to take the plunge again.

You carefully pour yourself the smallest sip of eggnog possible and stare at it for 10 minutes. Then you pick it up and swig it like a shot of tequila. Afterwards, you decide to pour a little more, and hesitantly take a larger mouthful. You survive this round.

5. Neutralization. You sign a peace treaty with eggnog, though you're still a little wary.

6. Complete understanding after you finally try it with alcohol.

Did that really just happen? Yes, yes it did. You tried an eggnog cocktail and totally asked for another one. It all makes sense now.

7. Young love. Your palate has totally learned to love eggnog, booze or no booze.

It's like you woke up this morning and suddenly, the whole world just made sense. In order to make up for all that lost time of hating eggnog, you stock up on this stuff. You're drinking it breakfast, lunch, and dinner, and wouldn't have it any other way. You're in love. It's a holiday miracle.