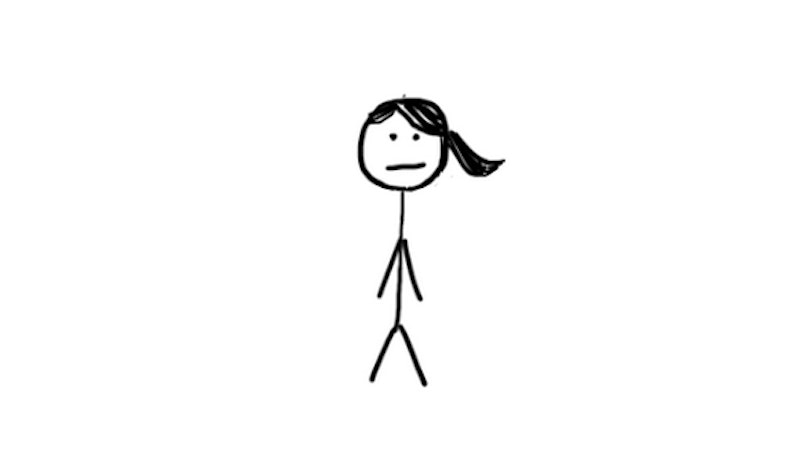 Like many of my Millennial peers, I find myself wanting to punch a lot of the people who write about us. I've begun to suspect a vast conspiracy — some baby boomer shadow organization that pays journalists for each use of the word 'entitled' in articles and columns about Gen Y. And, hey, I wouldn't blame them — boomers got critiqued hard by their own elders, a little group known as "The Greatest Generation" (imagine having to live up to that!). So, I get it, they're bitter. And then poor Gen X — never quite as shiny and special as generations before or after. Society dubbed them slackers and then moved on to us in all our ADD-diagnosed, trophy-winning, digital-native allure.

But I don't quite understand the vitriol hurled at a recent web comic about Gen Y. Created by the mysterious denizens of Wait But Why (WBW), the post was an illustrated guide to "Why Generation Y Yuppies are Unhappy." Maybe yuppies remind you of Lacoste sweaters and Bret Easton Ellis (classic yuppie), or maybe they remind you of organic canning and Park Slope (modern yuppie). But WBW thinks there's a special sort of Gen Y yuppy: Gen Y Protagonists & Special Yuppies, or GYPSYs.

"A GYPSY is a unique brand of yuppie, one who thinks they are the main character of a very special story," WBW writes. We're introduced to Lucy, a GYPSY who's very pleased to be Lucy but also kind of unhappy.

I admit, red flags went off when I read these first few sentences. Oh boy, here comes another rant about how the world's ills can be blamed on all those soccer trophies we got. But if you keep reading, WBW starts to connect the dots between Gen Y, happiness and expectations. Basis thesis: We were raised to believe life was one way, and when it turned out not to be like that we got kind of put out. And that's reasonable.

"Lucy's Depression Era grandparents were obsessed with economic security and raised her parents to build practical, secure careers," WBW notes. I don't think any of us can dispute this as generally true. It continues:

After graduating from being insufferable hippies, Lucy's parents embarked on their careers. As the 70s, 80s, and 90s rolled along, the world entered a time of unprecedented economic prosperity. Lucy's parents did even better than they expected to. With a smoother, more positive life experience than that of their own parents, Lucy's parents raised Lucy with a sense of optimism and unbounded possibility.

Also true? Obviously not across the board. But by and large, life was good for boomers around the time they started having and raising kids. And like at least every previous generation in the 20th Century, they raised these kids — us — to believe we could do even better than they had done.

"Where the Baby Boomers wanted to live The American Dream, GYPSYs want to live Their Own Personal Dream," WBW writes--again, not an entirely unfair assessment. It's also not a phenomenon unique to Gen Y; at the same time as we were coming of age believing careers could be meaningful, everyone was getting more into the idea of career fulfillment. The culture at large began to value personal happiness and satisfaction more than certain old-school values, because that's what happens during times of economic prosperity.

So then the WBW post delves into entitlement ... but somehow it didn't make me want to punch anybody. Perhaps because it put our generation into historical context, it didn't seem so much to be pointing fingers at us as flawed individuals but more situating us as products of unique social forces. And, honestly, a lot of us did come out of college with grander goals than simply securing a job, any job, no? I sure as hell wanted a job with a unicorn on top.

This isn't unique to our era, of course — hello, The Graduate and Reality Bites. But there are more of us graduating college than ever before, so there are probably more of us expecting at least some sort of return on our investment. Meanwhile, we've got social media to tell us who's doing better, cooler things than us at all times, which ratchets our inflated expectations up even more.

The WBW post ends around that note, and this has made some people very angry. Though last week was filled with people sharing this on Facebook with "Yes Yes YES," this week has been filled with outraged updates and articles from people who can't believe WBW didn't mention the economy!!!!! Adam Weinstein at Mother Jones writes:

You have no idea about student debt, underemployment, life-long renting. "Stop feeling special" is some shitty advice. I don't feel special or entitled, just poor. The only thing that makes me special is I have more ballooning debt than you.

He goes on to rant some more about his own financial woes, because — proving WBW's point? — Adam Weinstein thinks the post is About Him, particularly. And that seems to be the tenor of so many of the WBW post critiques.

It's true, the post did not hash out every sad figure about the economic climate in which Millennials are entering the workforce. But it did stress that our world is vastly different than that of generations previous.

I took the point of all that reality vs. expectation talk at the beginning to be something of a defense of Millennials, or at least an explanation. We were raised with expectations — not just of being "special snowflakes" but of economic prosperity, a wage premium from a college degree, a housing market that always goes up. Then everything went to hell, and the proverbial rug got pulled from underneath us. The members of older generations aren't some sort of inherently more grounded, less entitled, harder-working people, they were just raised with different expectations that turned out (for a while at least) to be true. We weren't.

So, I don't know ... maybe I'm being too charitable with the WBW comic because it made me laugh, or because I really like unicorns. Or maybe its because I thought that despite being a bit heavy-handed on the entitlement issue, it made some interesting and valid points as well. Did it make every point about Gen Y possible? No, of course not. But that sort of seems like an unfair expectation for any blog post. Hmmm, maybe that's why commenters are so unhappy?