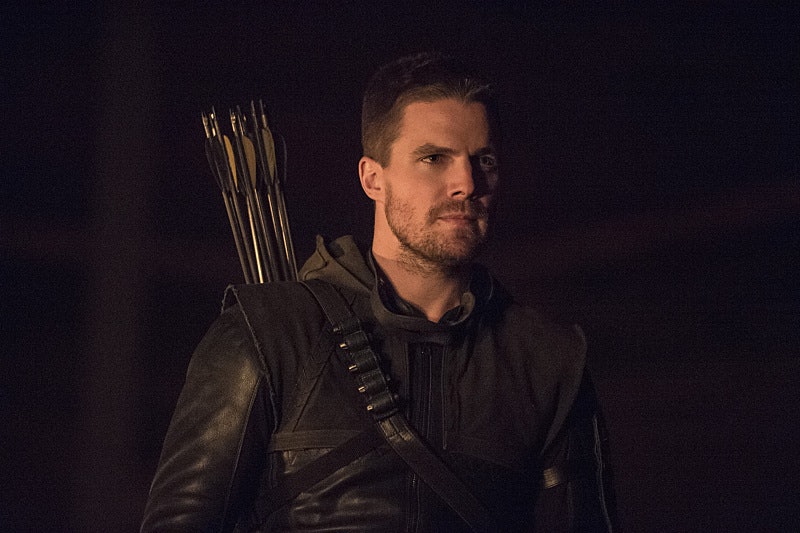 In the midseason finale of Arrow, we saw the show take a dark turn with the death of Oliver Queen. Oliver just couldn't match up to the far more seasoned head of the League of Assassins, Ra's al Ghul. While I feel the show stumbled in its casting of Ra's (who comes across as a poor man's version of Liam Neeson), the midseason finale is still pretty aces. The duel between them is brutal and like all CW shows, involves shirtless men. Never change, CW. It ends with Oliver Queen fatally stabbed in the chest and pushed off the side of the mountain. But how the hell can Arrow continue without Oliver Queen? Stephen Amell, who stars as Oliver, may have dropped cryptic tweets that made it seem like his run as the superhero was over. But don't worry, Arrow fans, Oliver will definitely be resurrected. As all comic aficionados know, no one stays dead in comics that long. But how will the TV series bring back our hero?

The moment Ra's al Ghul was announced as one of this season's villains, I wondered if the show would really stay true to the character. Ra's is a criminal mastermind, expertly skilled fighter, and one of Batman's greatest foes. His end goal is usually to put the world at perfect balance, which sounds lovely until you hear how he plans to accomplish that by wiping out most of humanity. Most importantly, whenever Ra's appears, the Lazarus Pit is soon to follow.

In DC Comics, The Lazarus Pit is a natural phenomenon known to heal the wounded, give its user longevity, and even raise the dead. Ra's knows the locations of many Lazarus Pits around the globe and has used them to prolong his life, with comics usually portraying him as being around 600 years old. On Arrow he mentions that the last time he had a duel was 67 years ago, which suggests the Lazarus Pit is in play on Arrow, and I think it will be the way we get Oliver back. Stephen Amell sharing the fan poster below on his Facebook only adds fuel to my theory.

The downside of bathing in the green liquids of the Lazarus Pit? Madness. Ra's seems to handle this side effect better than anyone else, but that doesn't bode well for what could happen to Oliver after being dipped in the Lazarus Pit. Most likely, Team Arrow, Black Canary, and other heroes in Starling City will have to step up and take Arrow's place. Remember when Buffy died and her friends had to handle all the demons lurking in Sunnydale early in Season 6? It's probably going to be a lot like that. They'll falter without Oliver, meanwhile he's been put in the Lazarus Pit (by Nyssa, maybe) only to come out a madman for a few episodes. The 14th episode of this season, which should air a few weeks after Arrow returns, is titled "The Return," which gives pretty good indication that Oliver's absence will be short-lived.

With his gruff demeanor and frequent brooding, the character is less like the Green Arrow of the comics and more like Batman-lite. This continues with the addition of Ra's Al Ghul. The duel that capped off the midseason finale seems to clearly be referencing Batman's duel with Ra's in Batman #244. To now introduce Lazarus Pit would mean Arrow is going full-on comic book crazy, much like its younger spinoff The Flash is doing to a greater degree with time travel and metahumans.

Maybe I'm being hard on Arrow. The show may not always portray Green Arrow, Black Canary, and more of my favorite characters the way I'd like, but when it works well, it is pretty entertaining. The midseason finale proved that the series can handle the deeper trenches of DC Comics and incorporate a variety of different mythos into its canon.

Arrow Executive producer Marc Guggenheim told Access Hollywood, "I think what's really cool about Ra's coming to the fore is his presence changes the show...Literally, the show will not be the same after Episode 9." I can't lie, I am excited at the possibility of seeing the Lazarus Pit in live-action and how Oliver's resurrection will ripple throughout the lives of those closest to him when Arrow returns on Jan. 21.