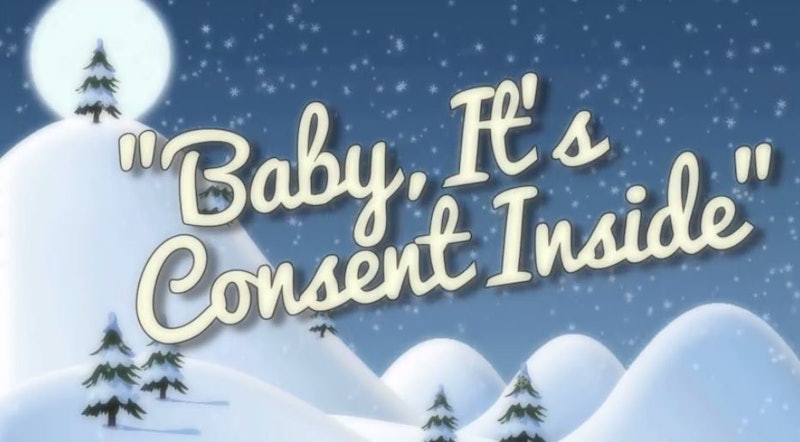 We all know that “Baby, It’s Cold Outside” is a phenomenally creepy song, right? Thank goodness someone went and improved it: This feminist-approved version of “Baby, It’s Cold Outside” makes the song way less gross. It’s also a whole lot shorter; when you take out all the pressuring tactics and “What’s in this drink?” idiocy, it clocks in at under 40 seconds. Surprise!

Created by actor/writer Dara Laine and Nate Larkin-Connolly and starring Laine and John Weselcouch, the video opens with a vintage-style title card featuring the reworked tune’s name — “Baby, It’s Consent Inside” — and sticks with the familiar first line: The woman (Laine) singing, “I really can’t stay.” But what happens next? Not what you’re used to. “It’s totally fine,” her male companion (Weselcouch) says. “I’ll call you a cab.” She’s already on it, though, ordering an Uber and getting her coat on. He asks her to text him when she gets home safe; she says she will; they hug it out; and she leaves. Sure, he’s a little disappointed — but the important thing is that he doesn’t put his own desire for sex over her comfort, safety, or desire simply to get home before the snow gets too bad. Well played, sir and madam! Well played, indeed!

Stephen Duesner at Salon gave us a brief history of the song back in 2012. Written in the 1940s by songwriter and lyricist Frank Loesser, who is probably best known for the musical Guys and Dolls, “Baby, It’s Cold Outside” was originally just a party piece Loesser performed occasionally with his wife; Columbia Pictures later bought it and brought it into the public in the 1949 film Neptune’s Daughter. Oh, and for the curious, the two voice parts were originally referred to as “The Wolf” and “The Mouse.” I don’t know about you, but that little detail kind of made me raise my eyebrow juuuuuuuust a bit.

Bustle’s Kadeen Griffiths noted that the song’s most ick-inducing lines — “The neighbors might think… (Baby, it’s bad out there.) Say, what’s in this drink? (No cabs to be had out there.)” — are frequently changed in contemporary covers of it — but I would argue that even that isn’t enough. The song’s troubling views and questionable lyrics are more or less a product of its time; even so, though, there a comes a point when it’s time to retire such problematic pieces — even if they’re considered “classics.”

For comparison purposes, here’s the original. Personally I find it rather uncomfortable to watch; she clearly wants to go — but he keeps physically stopping her from doing so, taking off her hat when she puts it on her head, grabbing her coat from off of her shoulders, and so on. Again, it’s a product of its time and all that — but times have changed, and none of this is acceptable behavior anymore:

More like this
The 'Hocus Pocus' Sequel Finally Has A Release Date & It Makes Total Sense
By Shannon Barbour and Radhika Menon
Sandra Bullock, Girlboss Extraordinaire
By Matt Harkins & Viviana Olen
Meet The Disney Imagineer Bringing 'Guardians Of The Galaxy' To Epcot
By Charlie Mock
Why The '365 Days' Sex Scenes Are Good, Even If The Movies Aren’t
By Arya Roshanian
Get Even More From Bustle — Sign Up For The Newsletter