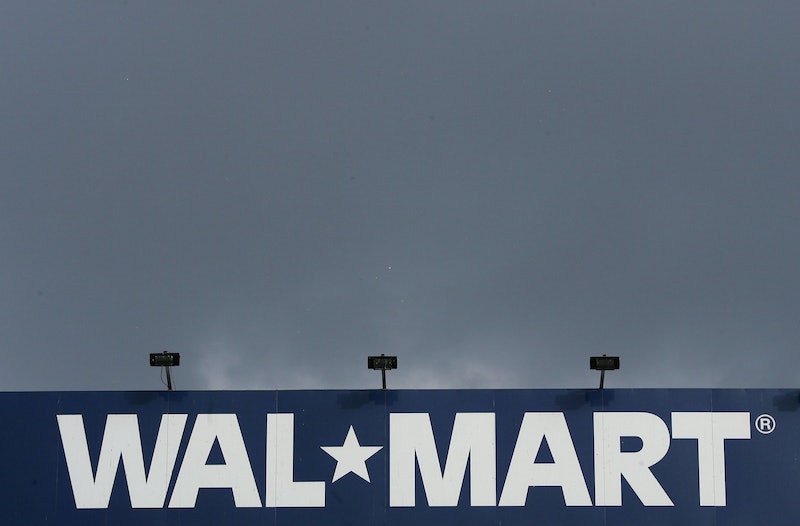 Just two weeks after SCOTUS began hearing arguments in a pregnancy workers' rights case, Walmart is being sued for pregnancy and gender discrimination after allegedly exposing an employee and expectant mother to harsh chemicals that put her in the hospital. Three legal organizations filed a federal complaint on behalf of the former employee, Candis Riggins, on Wednesday.

According to the complaint provided to Bustle, Riggins claims that she was discriminated against when Walmart failed to provide suitable accommodations to her when she became pregnant. Although Walmart A Better Balance, DC law firm Mehri & Skalet, and National Women's Law Center will represent Riggins in the class-action complaint to the Equal Employment Opportunity Commission.

Riggins got a job at a Laurel, Maryland Walmart in June 2013. By that September she was pregnant. At 23 weeks, Riggins began to feel nauseated while working with cleaning chemicals she used working as a full-time maintenance associate. Riggins asked a co-manager if she could be reassigned as a cashier, and was moved to the role for the day.

After that, Riggins only worked as a cashier when the store was short-staffed. Thus, she was still exposed to the chemicals in her duties, landing her in the hospital on multiple occasions. Even after she was reassigned as a door greeter, Riggins was not permitted to sit on a stool though other employees with injuries were given such accommodations, according to the filing. As she advanced in her pregnancy, Riggins began to call in sick. She was terminated on May 19, 2014.

In March 2014, Walmart discreetly changed its pregnancy policy to include "reasonable accommodations" for "temporary disability caused by pregnancy" after the groups filed a complaint with the EEOC. But Ellen Eardley, a partner at Mehri & Skalet, says those changes are not enough.

Walmart has made only the bare minimum of accommodations for its pregnant workers. Walmart’s policy accommodates women with disabilities caused by pregnancy, but in practice Walmart does nothing to accommodate the vast majority of pregnant women who are healthy, yet still may need a temporary change in duties. It’s not just women with disabilities who may need to avoid toxic chemicals during pregnancy, for example.

Riggins was still employed at the store when the policy was changed, but she was still not given the "reasonable accommodations" promised by the franchise. So now, with Riggins as their rallying point, they are hoping to affect positive change for women nationwide.

More like this
Chris Kaba's Family Continue Fight For Justice After Viewing Police Bodycam Footage
By Sophie McEvoy
Black History Month UK’s 2022 Theme Calls For Action, Not Words
By Maxine Harrison
Mel B Speaks Out Against Domestic Violence In A Powerful Speech
By Sophie McEvoy
Romance Authors Are Mobilizing For Reproductive Rights
By Natalia Perez-Gonzalez
Get Even More From Bustle — Sign Up For The Newsletter