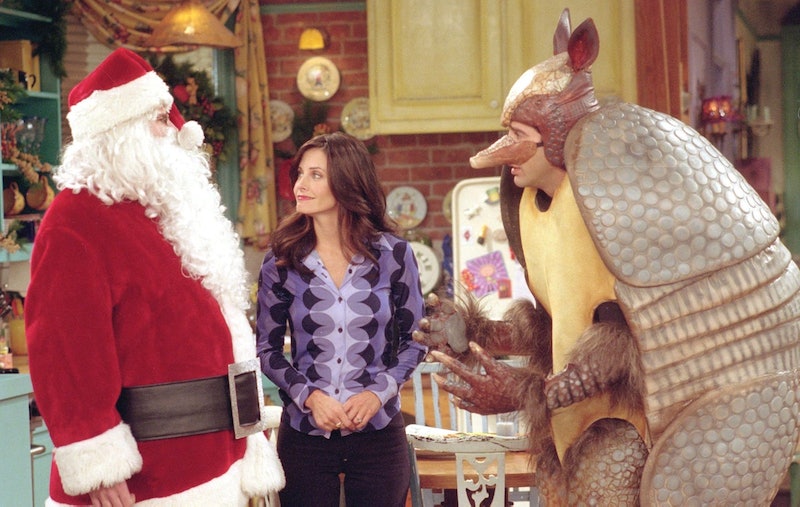 As a lifelong fan, I can definitely say that there is nothing Friends does better than a Thanksgiving episode. However, Christmas is a very close second. From Chandler dressing up as Santa to Monica letting the group help her decorate her tree only to turn it around to the immaculately decorated side, the Friends Christmas episodes feel a lot like my holiday traditions — although that could totally just stem from the fact that I get way more invested in TV shows than is probably healthy.

Besides, if you feel like Christmas snuck up on you this year, marathoning all the holiday-related Friends episodes is a good way to get in the mood while wrapping presents and baking cookies. Of course, the best gift of all will be the entire series on Netflix starting January 1, but until then, we have to make do. Fortunately, if you don't already own the DVDs, Friends is generally on some channel, somewhere, 24 hours a day.

Over the 10 season run of Friends, seven of those seasons celebrated Christmas (and occasionally Hanukkah). Here are all seven of those episodes, ranked from best to worst. Well, not worst. Least best. Because it's Friends. There is no worst.

#7: "The One With The Girl From Poughkeepsie"

Season 4. Phoebe's Christmas song. You remember it. It's a classic.

This is a solid episode — and since it's from Season 2, it's the first episode that Friends used to addressed Christmas — but it's locking in the holiday spirit, or it would totally be higher on the list. But then there's the scene where Joey and Chandler give out the presents they bought at the gas station while they were offering moral support to Phoebe while she tried (and failed) to introduce herself to her dad. Wiper blades, cans of soda, and condoms always make excellent gifts.

#5: "The One With The Inappropriate Sister"

This episode from Season 5 isn't heavy on the Christmas — except for when Phoebe decides to be a bell ringer and collect money outside of Macy's. Unfortunately, though, people start dumping trash and cigarettes into her collection bucket, which leads to her posting up all kinds of signs and reverting back to her street Phoebe ways.

In the brief period of time that Ross got serious with Mona in Season 8, he was totally freaked out by the idea that she wanted to send a holiday card as a couple. Ross completely freaks out, and I kind of don't blame him. After all, my parents have been married for thirty years and I don't even think they are sending out a joint holiday card.

#3: "The One With Christmas in Tulsa"

Remember that lame chunk of Season 9 when Chandler was forced to shuffle back and forth between Tulsa and New York? This is the episode that finally ends, because he ends up quitting his job when he realizes how much he'd rather be with Monica on Christmas. And not even the runner up Miss Oklahoma (played by Selma Blair) could get in his way.

This episode from Season 6 involves my very favorite scene from Friends ever: Ross and Monica's ridiculous routine, performed when they get to be party people on Dick Clark's Rockin' New Year's Eve, and it's done in total seriousness. Long have I wished for someone to learn the routine with me so that we, too, could perform it on December 31, but it has yet to happen. Maybe this year? Bonus: Rachel and Phoebe search for Monica's hidden Christmas presents, and end up finding Chandler's crappy ones instead.

#1: "The One With The Holiday Armadillo"

In Season 7, Ross has the opportunity to hang out with his son for Christmas, but unfortunately, Ben is not as pumped. So in an effort to get him excited about Hanukkah, Ross dresses up an armadillo he calls the Holiday Armadillo (naturally) to tell the story of the Festival of Lights... only to be interrupted by Chandler in a Santa suit. That's not the best part, though. The best part is when Joey walks in the door dressed as Superman, which led to the best quote of the episode. "My favorite part was when Superman flew all the Jews out of Egypt," Chandler-as-Santa says. Mine, too.