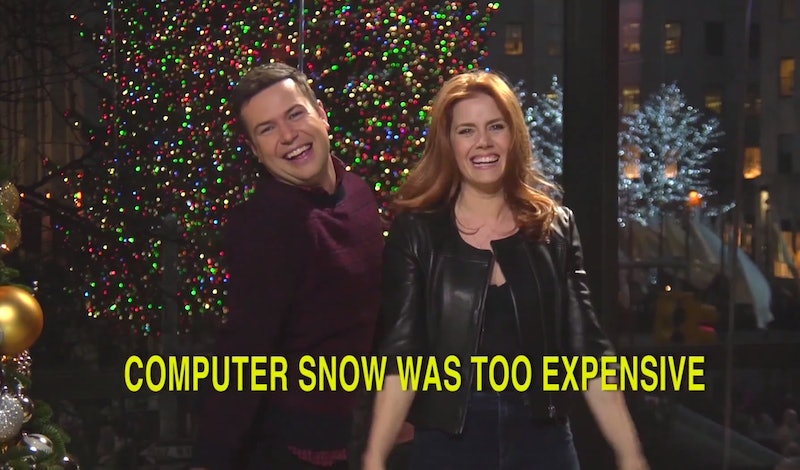 There's a lot to love about this week's new Saturday Night Live promo with episode host Amy Adams and cast member Taran Killam — so much, in fact, that I actually don't know where to begin. Adams has a wonderful knack for comedy, and it's just as evident here as it was the first time we all saw Enchanted.

Adams is, of course, on the show to promote her upcoming Tim Burton film Big Eyes, in which she plays legendary artist Margaret Keane, alongside Django Unchained star Christoph Waltz. The promos don't take much inspiration from the film (unless you count Amy Adams' naturally big eyes, which are ridiculously gorgeous), but they do take inspiration from the Rockefeller Center Christmas tree a few times. From Adams and Killam playing with fake snow they assume will be added into the scene in post production to Killam being inspired to propose to Adams numerous times thanks to the romantic setting behind them, it's all great.

However, nothing's better than watching Adams successfully embody how every One Direction superfan is feeling about the band's spot as musical guests of the episode. Who knew Adams was such a 1D fan?

Check the promo below. As always, SNL will air this Saturday on NBC at 11:30 PM.

More like this
Idris Elba "Breaks Out" Of London In 'Luther' Film First Look
By Sam Ramsden
Here’s Everything Coming To & Leaving Netflix In December
By Jake Viswanath
Yes, That's Lindsay Lohan's Sister Singing In The 'Falling For Christmas' Movie
By Radhika Menon
Keke Palmer Paid Tribute To "Other Half" Darius Daulton After Announcing Pregnancy
By Jake Viswanath
Get Even More From Bustle — Sign Up For The Newsletter