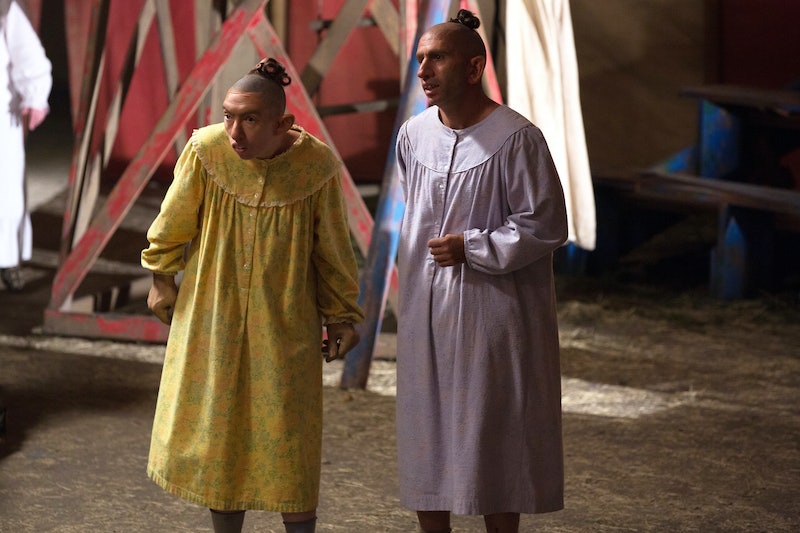 Of all the Freaks featured this season on American Horror Story: Freak Show, we were most familiar with Pepper... yet we knew nothing about her. The character, played by Naomi Grossman, had previously appeared on American Horror Story: Asylum, as a woman wrongfully accused of killing her sister's baby, and was soon cured of her microcephaly, the disease she suffers from, by aliens. (Oh, this show.) But that's about all we ever learned about Pepper. And as we explored the backstories of nearly everyone on this season of Freak Show — Elsa, Dell, Elsa, Jimmy, Elsa, Ethel, and Elsa (okay, mostly Elsa) — we still didn't know Pepper's origin. But on Wednesday night's episode, "Orphans," we discovered that Elsa found Pepper at an orphanage. And we also discovered that Pepper was married to Salty, despite the fact that the show had previously only set them up as friends, or siblings, or... anything but lovers.

But obsessive fans of American Horror Story might have discovered this fact earlier this month. In an interview with Channel Guide Magazine, Grossman revealed that Pepper and Salty, played by Christopher Neiman, were married. And it turns out you weren't the only ones who were surprised by this fact.

Salty is my husband. That was actually a surprise to me, as well. It makes sense though. I think that when you look like that, and you find someone else that looks like you … You marry them.

Which made the initial revelation in "Orphans" even more difficult to take in. Watching Pepper mourn Salty — who supposedly died of a stroke, but, really, who believes that when Stanley is so close by? — was a heart-breaking moment for new fans of Freak Show and those who fell for the character during her Asylum days.

True, we know Pepper eventually gets her happily ever after(-ish) in Asylum, but this was far too early for 'til death do us part for Salty and Pepper. Sniff.

More like this
Courteney Cox Recreated An Iconic 'Friends' Scene To Surprise Fans
By El Hunt
David Tennant’s Transformation In ITV’s 'Litvinenko' Is Astonishing
By Sophie McEvoy
The 'Kenan & Kel' Reunion On 'SNL' Took A Dramatic Turn, Thanks To Keke Palmer
By Brad Witter
These 'Criminal Minds' Throwback Photos Show The Cast’s 17-Year Evolution
By Grace Wehniainen
Get Even More From Bustle — Sign Up For The Newsletter