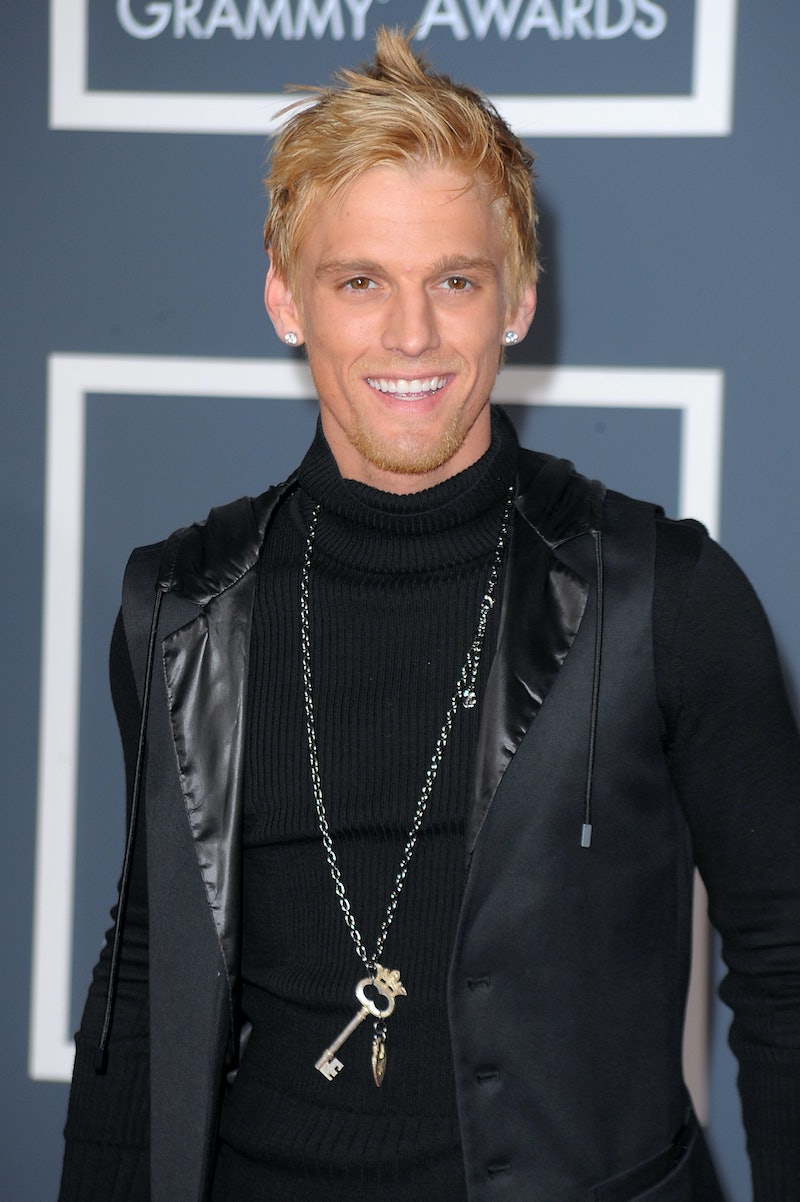 Children of the early '00s, ready to feel old? Aaron's Party, the seminal sophomore album from tween idol Aaron Carter, turns 13 years old this week. It seems like just yesterday that we were choreographing dances to "Aaron's Party (Come and Get it)" and trying to decipher the real meaning of "I Want Candy" (note: it's not actually about candy), but alas, it's been over a dozen years since the bestselling CD came into our lives. If you're starting to feel nostalgic about that period of time when a blond pre-teen rapper reigned supreme, you're in luck: Carter, now 25 (!), is making a comeback.

This isn't the first time that Carter's tried to regain the glory of the early aughts, but with a months-long, sold-out tour, a behind-the-scenes documentary, and a new album in the making, it's his most serious effort so far.

"I just really want to reconnect with my fans," Carter said during a recent phone interview with Bustle. "I want to show them how I can take songs from my past and apply them now, when I'm an adult."

Carter's After Party tour began in February, and by December, he'll have played close to 150 shows across the United States and Canada. The venues are small — most have a capacity of 700 and under — but their intimacy is perfect for an artist attempting to rebuild a relationship with a once-devoted fan base. The audiences, mostly female college students and twentysomethings, often "don't know what to expect" at the shows, said Carter, "but when they hear it, I think they're pleasantly surprised."

The setlists for each show contain a number of sing-along hits — "I Want Candy," "Aaron's Party (Come and Get It)," "That's How I Beat Shaq" — as well as a handful of new songs, off an upcoming CD that, when released, will be Carter's first non-compilation album since 2002.

"I can't wait to release some music and get back out there," Carter told us. "To tour all around world and then release music... I'm blessed that I was given this opportunity."

When we spoke to Carter, we couldn't resist asking him about Aaron's Party, an album that will always hold a special spot in our hearts. If you haven't heard it since middle school, give it a re-listen — its mix of radio-friendly, energetic dance tracks and adorably sweet ballads is actually pretty great. Thirteen years since its release, here are Carter's own thoughts on the album:

"The album was creative genius. It made me completely different than anyone else out there — a white kid rapper who also sings? Nobody was doing that... and making it was a lot of fun. It was basically like, get in the studio, and lock ourselves in there. It was a lot of messing around, just really fun. I remember eating a lot of Krispy Kreme donuts."

On its lasting influence:

"Macklemore copied what I did with the "Aaron’s Party" music video with the bike and fur coat and two girls in the back. It's awesome to see that, and I was really flattered, but "Thrift Shop" copied what we did exactly."

We had major doubt about Carter's influence on the "Same Love" singer until we discovered this eerie side-by-side comparison of the two. Carter, you may be onto something.

On opening track "Aaron's Party (Come and Get It)":

"When we filmed that video, I hadn't slept for two days... we'd filmed four music videos for the album in a row, and by that time, I had huge bags under my eyes. You can see it in the video."

On "I Want Candy," "The Clapping Song," and the album's several other 1960s cover songs:

"That was the music my parents listened to in the '60s. Those were all the songs that I grew up with."

On "My Internet Girl," a song about crushing on a girl through AOL, complete with a dial-up intro:

"Wow... a dial-up? That song was just ahead of its time. It's funny now, but it was really ahead of the curve when it came out."

We have to give him credit there — not many artists in 2000 were singing about "mail in the inbox" and "jammin online," but it was smart of them to stay away from the computer metaphors. "Shufflin' through my windows/gotta find my way back to you" loses some of its relevance post-Facebook.

If you're breaking out your old CD player, though, that's exactly Carter's goal. The After Party tour, with its collection of nostalgia-inducing hits, is bound to revive at least some of his audiences' love for the former teen star.

"My band has taken these older songs and made them more mature, so that I can do them now," Carter said. "It’s funky, edgy and cool... I've developed a craft, and it's time for me to apply it and show people what I’m made of."

If he sounds antsy, there's good reason — his comeback was supposed to happen years ago. After 2002's Another Earthquake failed to gain the same momentum as Carter's previous albums, the singer spent the next few years releasing compilations, recording songs for direct-to-video movies, and dealing with record company lawsuits.

His much-publicized love triangle with then-teen stars Lindsay Lohan and Hilary Duff kept him busy in the tabloids, but his music career began to stall. A short-lived reality show, House of Carters, and a stint on Dancing With the Stars didn't do much to help, and a 2011 rehab stay halted any further attempts to revive his celebrity.

Yet by the end of the year, Carter had begun starring in The Fantasticks, an off-Broadway musical, and only a few months later, he gave several one-off concerts up and down the East Coast. Due to the musical's grueling 8-shows a week schedule and this year's After Party tour, Carter has performed close to 600 shows in less than three years.

Carter knows he's lucky — most teen idols never regain the level of fame they once had, despite their best efforts. Their audiences just grow too old, and the new generations listen to different music. After 13 years, most would've given up on reviving their careers — but not Carter. He's determined to make a comeback, and with the success of the tour so far, as well as the documentary and album in the works, it's not too far-fetched a possibility.

"I want to show my fans what I've grown to become," Carter said. "I picked myself up off the ground, face flat... I want to show them how much I appreciate having a second chance to do what I love."