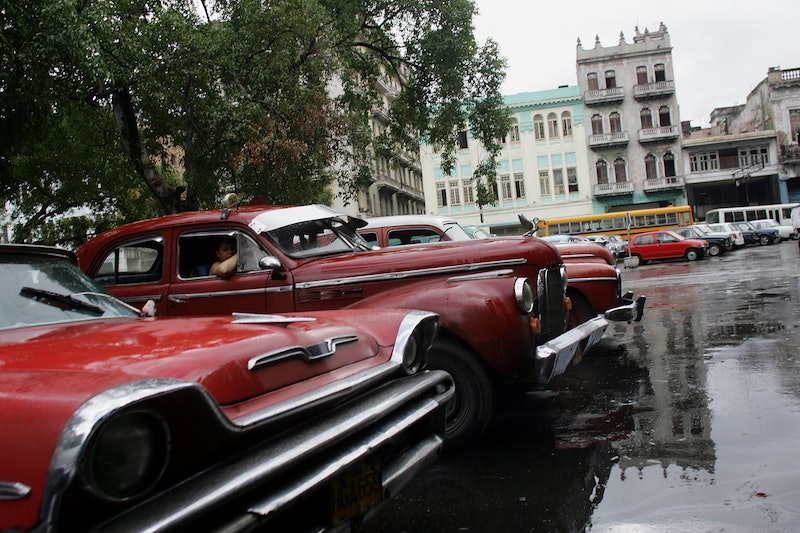 America and Cuba are separated by only 90 miles of water, but the two nations have been cut off from one another for over 50 years. If you've ever researched traveling to the beautiful island nation, you'll have found that as an American citizen, it's not easy. That changed dramatically on Wednesday, with Obama's announcement that America will normalize diplomatic relations with Cuba after the release of American citizen Alan Gross, who had been held in a Havana prison for the past five years.

But what exactly does "normalizing relations" mean? Well, for starters, for the first time since 1961, American will have an embassy in Cuba's capital, Havana. For many more Americans, legal travel to the island will also become much easier. Cubans will also find it easier to visit relatives in America, and Cuban-Americans will be able to send more money home to Cuba.

But while diplomatic relations have now been made "normal," the embargo that bans trade and travel in Cuba since 1961 still remains in place. Obama has eased the embargo's restrictions, but he can't entirely end it — only Congress can do that.

Still, Obama's announcement is a huge, historic change that represents a certain final ending to the Cold War. 50-plus years of U.S. sanctions failed to end the Castro regime in Cuba, so a change in tactics seems overdue. As the White House put it, "we cannot keep doing the same thing and expect a different result."

Here's what the decision means for you — and for everyone else:

What does Obama's announcement mean if you want to visit Cuba? First of all, wait a few weeks. Nothing will change until revised travel rules are issued by the Office of Foreign Assets Control (OFAC) in "the coming weeks." Currently, you can already apply to visit Cuba if you're doing any of these activities: Seeing family, performing at a benefit, working for charity or educational purposes, exporting media or art, working as a journalist, or doing research.

Probably the easiest way to visit Cuba is on a "people-to-people" trip. These are regulated group visits run by tour companies, which involve cultural and educational exchange with Cubans. These trips are already legal, but it's expected that the new rules will loosen restrictions and allow many more Americans to go for it.

2. It Could Bring More Freedom To Cubans

Obama's move is a first step towards lifting the embargo — the ban on travel and trade with Cuba that keeps the island virtually cut off from cultural exchange with the Western world. But how does America's embargo stop other countries from dealing with Cuba? It turns out that the blockade doesn't just affect U.S. businesses: It also punishes foreign firms that trade with Cuba.

Lifting the embargo — which is unlikely to happen for a few more years — would mean an immense amount of cultural mixing between America and Cuba, and all that mixing could inspire Cuban calls for democracy and improved human rights.

Currently, Cubans can't chose their leaders. They live the dictatorship of Raul Castro, who inherited it from his brother Fidel. Freedom of speech is severely limited. Cuba has the most restricted media in the Western Hemisphere — more restricted than any other developing nations in Latin America. Bloggers who criticize the government are often arrested. Protestors are often arrested and held without trial, and over 6,000 human rights activists were detained for their activism in 2013.

3. It Could Ease Cuban Suffering

Obama's announcement could have a direct effect on the poverty in which some Cubans live. Cuban-Americans can now send up to $2,000 to family members in Cuba every three months, up from $500 previously allowed.

And if the embargo is lifted, the economic benefits for Cuba will be profound. The blockade has cost Cuba over $1 trillion dollars since it began in 1961, Cuban Foreign Minister Bruno Rodriguez told the UN, and created "hardships" for millions of Cubans.

4. It May Make America Better Liked

Their approval is likely to be shared by U.S. allies outside of the Americas. In 2014, 97 percent of countries in the United Nations voted in favor of the "Necessity of Ending the Economic, Commercial and Financial Embargo imposed by the United States of America against Cuba." Most of the world has been baffled as to why America has kept up sanctions against Cuba for so long, particularly when we haven't bothered to sanction other countries with far worse human rights abuses.

5. It Will Change Obama's Legacy

Along with support for gay marriage, universal healthcare, more equal pay for women, and killing Bin Laden, the president's partial ending of the Cuban embargo may well go down in history as one of the most crucial parts of the Obama legacy. At least, that's what some commentators are already saying.

The Cold War largely ended 25 years ago, so you'd think we could have gotten on this ball a bit sooner. But still — it's a major achievement.

6. It Could Change Major League Baseball

If America's embargo against Cuba is fully lifted, MLB teams will start looking seriously at Cuban baseball talent. Without the embargo, Cuban baseball players will be able to enter America with some kind of normal immigration status, rather than as refugees. American teams will also be able to travel freely to Cuba for sporting events and invest in Cuban players and teams.

Americans traveling legally in Cuba will soon be allowed to bring home up to $400 of Cuban goods, including up to $100 in tobacco or alcohol. You just need to wait a few weeks until diplomatic relations become fully restored.

Cuban cigars aren't the only things that some Americans will be thrilled to get their hands on: Cuba is a trove of 1950s American cars that have been frozen in time, and American collectors are already super excited at the chance to own some of these classic vehicles.

6. It Could Finally Push Congress To Fully End The Embargo

We saved the most important change for last: The embargo can't end without Congress because it's enshrined in American law, and the president isn't empowered to revoke legislation. But will Congress really do it now? The answer is that it could go either way.

In the past, most Dems have backed opening up diplomatic relations with Cuba, whereas Republicans opposed it. However, some very powerful GOP leaders have recently come out on Obama's side.

Senator Rand Paul supports Obama's move, saying that more trade with Cuba "is probably a good idea" given that the embargo "just hasn’t worked." GOP Congressman Jason Chaffetz called the travel ban "ridiculous," and added, "I gotta tell you, as an American, I should be able to travel anywhere I want to in the world." 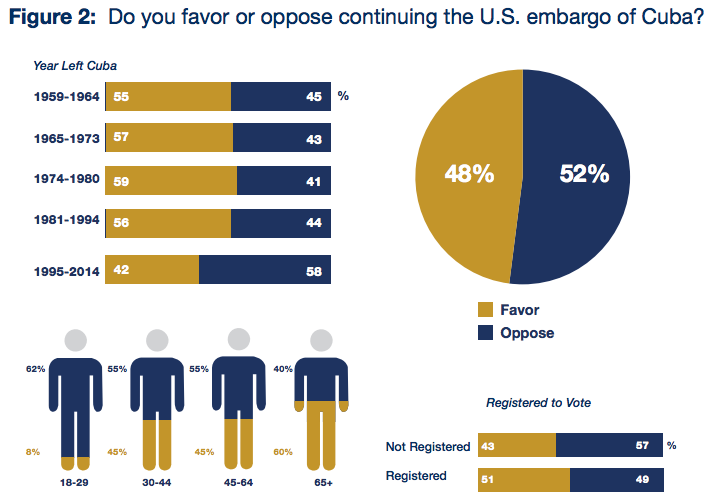 A majority of Americans of all stripes now want the embargo gone. That even includes Cubans who fled the regime and now live in Florida, who strongly supported the embargo in the past. This represents a major cultural shift, and it matters because it means U.S. lawmakers from both parties no longer feel pressure to keep up the embargo.

Still, it's not clear that a bill to end the embargo would get past both houses of Congress. Both houses are controlled by the GOP until at least 2016, and most of the party is still virulently anti-Castro. House Speaker John Boehner (R-OH) slammed Obama's move and totally rejected the idea of taking any further positive action. "Relations with the Castro regime should not be revisited, let alone normalized, until the Cuban people enjoy freedom – and not one second sooner," he said.

Florida Senator Marco Rubio, whose parents are exiles from Cuba, also slammed Obama's move in an emotional and not-always-accurate statement. He actually called for more sanctions on Cuba, not fewer, which is an extreme position — even by the standards of most Cuban Americans today.