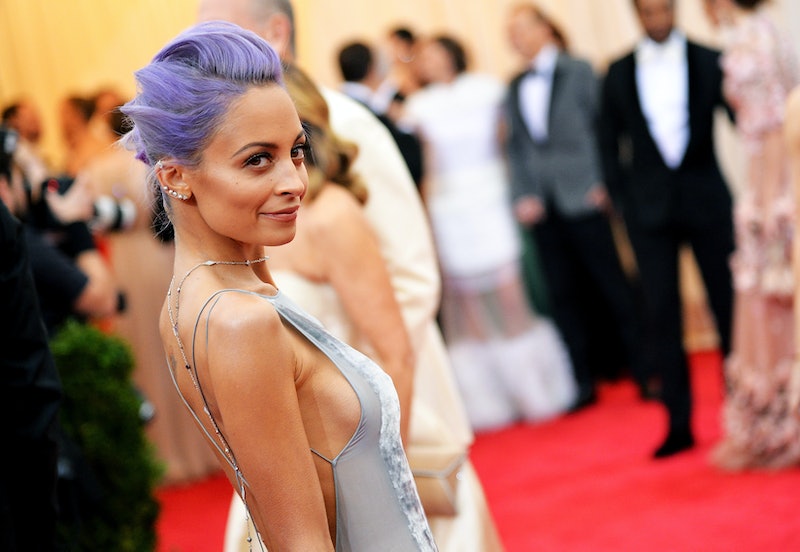 Of all the controversial things Nicole Richie has done (I mean, The Simple Life??) wearing a jacket should not be high on that list. Alas, this jacket also happens to belong to her daughter, who is six. Yeah, Nicole Richie borrowed daughter Harlow's jacket and the decision is bound to cause some backlash. But is this really what we should be getting worked up about?

Richie sported the jacket at the Baby2Baby holiday event that she hosted in Los Angeles, over a plain white tank and jeans. The fuzzy jacket would clearly be a full-sized coat on a 6 year old, but on Nicole it was three-quarter sleeved and fell just below her hips. Frankly, I thought it looked really cute, especially since it's pale pink and Nicole recently dyed her hair dark blue so the two shades played off each other quite well.

So far, most of the comments surrounding her outfit choice and the cheeky Instagram post that accompanied have been positive and I'm hoping it stays that way. As Heather Cichowski at The Gloss said, "I’m sure that once all of the awful internet trolls get wind of this, there will be an onslaught of skinny shaming, especially since Nicole is a frequent target for body shaming. There are always some photos of her circulating the media that try to diagnose her supposed anorexia." As we saw when Bethenny Frankel posted a photo of herself in 4-year-old daughter Bryn's pjs, the Internet can be quick to label people with problems they may or may not have.

Eating disorders are serious business. They "have the highest mortality rate of any mental illness," according to ANAD and are notoriously difficult to treat since they often involve depression as well as health complications. Accusing celebrities of being anorexic is not only mean spirited, it's also useless. Whether or not Nicole Richie or any other famous woman (or man) has an eating disorder, your angry tweet about how skinny she is won't help one bit. If you care so much about those who struggle with illness, perhaps you should donate to the National Eating Disorder Association instead of worrying why Richie fits into her daughter's clothes.

Of course, I've yet to see any shaming reactions to Richie's Instagram post, so perhaps folks on the Web will surprise me by focusing on compassion instead of outrage.

As for the outfit, I think it's pretty darn chic.